The Atlantic slave trade: What too few textbooks told you - Anthony Hazard 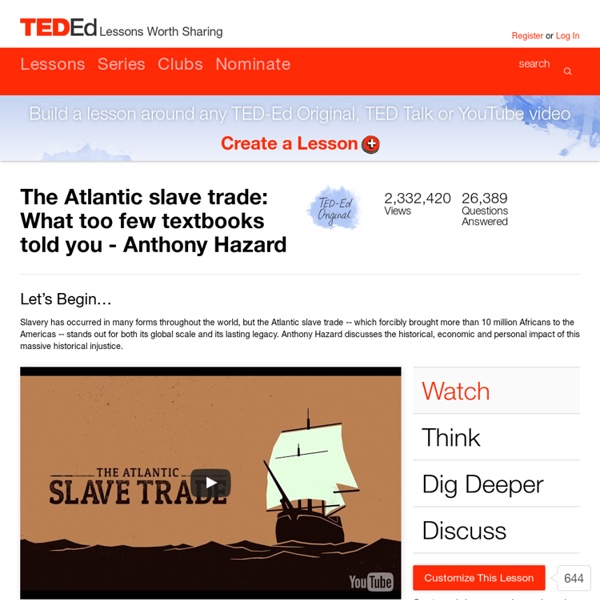 The Atlantic slave trade sent slaves to various locations in the world. What effect did this forced migration have on these areas? Visit the Mariner’s Museum Captive Passage website. Gain some more perspective on how the slave trade affected the Americas. Then read the transcript or listen to this 15 Minute History podcast and find out more. Are you a visual learner? Gain a greater understanding of life aboard the slave ships at PBS. What do North America, the Caribbean, Brazil, Europe and Africa all have in common? Are their myths and misconceptions about slavery?

Slavery in America - Black History The South would reach the breaking point the following year, when Republican candidate Abraham Lincoln was elected as president. Within three months, seven southern states had seceded to form the Confederate States of America; four more would follow after the Civil War (1861-65) began. Though Lincoln’s antislavery views were well established, the central Union war aim at first was not to abolish slavery, but to preserve the United States as a nation. Abolition became a war aim only later, due to military necessity, growing anti-slavery sentiment in the North and the self-emancipation of many African Americans who fled enslavement as Union troops swept through the South. Five days after the bloody Union victory at Antietam in September 1862, Lincoln issued a preliminary emancipation proclamation, and on January 1, 1863, he made it official that “slaves within any State, or designated part of a State…in rebellion,…shall be then, thenceforward, and forever free.”

The historical audacity of the Louisiana Purchase - Judy Walton In McCulloch v. Maryland (1819), the United States Supreme Court not only endorsed the constitutionality of the National Bank but went on to uphold a broad interpretation of the federal government's powers under the Constitution. In essence, the Court approved the use “implied powers” (through the Necessary and Proper Clause) as long as they were linked to the execution of an expressed power.

HISTORY OF SLAVERY The horrors of the slave trade do not go unnoticed in England, however hard the traders try to justify their activities (even, preposterously, proclaiming the care and consideration which they show to their precious cargo). The first sharp prick to the public's conscience comes in 1688 with the publication of Aphra Behn's novel Oroonoko (about the sufferings of an African prince and his loved one, transported by the English to slavery in Surinam). By this time the Quakers are already prominent in their condemnation of this inhuman trade, with the society's founder, George Fox, speaking strongly against it. Children and Youth in History Colleen A. Vasconcellos, University of West Georgia Introduction Inventing the American presidency - Kenneth C. Davis You can read more about the history of the presidency and the individual Presidents in Don’t Know Much About® the American Presidents by Kenneth C. Davis.Here are more places to learn about presidential powers:Exploring Constitutional Law: The University of Missouri-Kansas City Law SchoolThe Miller Center, University of VirginiaThe National Constitution Center Did you know that almost all of America’s presidents have been fathers? Test your dads-in-chief savvy with this 15-question quiz.

Slavery Throughout the World: World History in Context No system of slavery has persisted on a significant scale unless supported by continuing systematic introductions of fresh captives: strangers brought into the slaveholding society without the cultural knowledge of seasoned slaves, not to mention the inherited rights accorded locally born members of the host community. Trade as a source of such newcomers has the specific connotation of purposive investment in--and organized movements of--people, by merchants in a commercialized economy. Otherwise, small numbers of dependent newcomers might enter localized communities through occasional, ad hoc transfers from neighbors, below the threshold of such an organized "trade." Distressed persons have offered themselves...View More

History vs. Andrew Jackson - James Fester Andrew Jackson’s life has always been a subject of controversy for historians. Jackson’s first biographer James Parton said, “Andrew Jackson, I am given to understand, was a patriot and a traitor.” Today, historians continue to discuss the reasons for this controversy by examining and re-examining his life story.Click this link to learn more about his life. From Abigail Smith Adams to Cotton Tufts, 28 November 1800 Columbia City of Washington Novbr 28 1800 Dear Sir I feel as tho I was much further removed from all my Friends and Connections <, Start deletion,in, End,> at the State of Massachusetts, than one hundred and 50 miles from Philadelphia could make me. as to politicks, I believe it best not to say any thing upon the Subject at present; I must leave them to a certain General who has so well understood the art of warfare, as to miss his mark and wound himself instead of destroying his opponent, at least this is the universal voice as reported from every quarter where his Letter has circulated—grose falshoods he has told—as well as some truths the person he meant to serve, he has injured, and the one he designd to injure, he has Served—

Unarmed. Not wearing a seatbelt. Running away. Police are more likely to shoot if you’re black. In the past three years, police shootings have sparked an unprecedented series of protests across the country. Groups led by Black Lives Matter said the shootings were part of a larger pattern of racial discrimination. Law enforcement officials said they weren’t. Black History Month 2014: 101 African American Firsts Click Here For Previously Posted Annual Black History Month Projects on BlackPast.org African American history is about much more than chronicling a series of "firsts." The time and place of a breakthrough reflects not only remarkable individual achievement but is itself an indication of the progress or lack of progress of black people in realizing the centuries-old intertwined goals of freedom, equality, and justice. Our 2014 Black History Month Observance examines the progreess toward those goals by acknowledging those who were the first in their fields of endeavor.