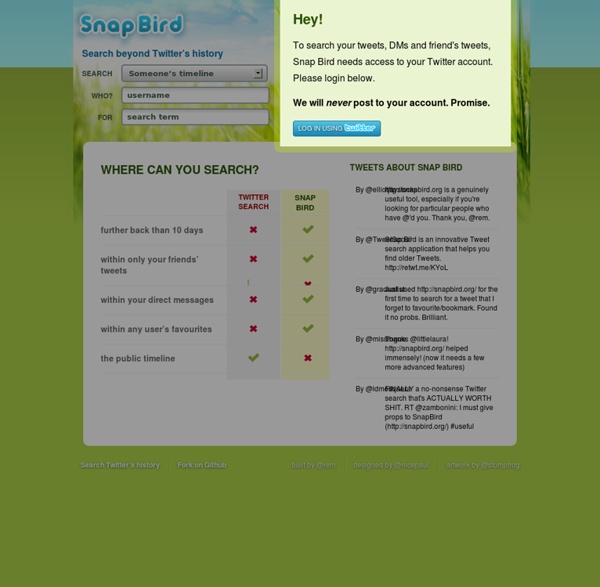 Search Twitter users by Location and Bio and Create Twitter Lists: LocaFollow Search and filter options allowing you to find people to follow depending on location, influence, number of followers, how active users are on Twitter and many more! Find the most beneficial people to target so that you can grow and increase the quality of your Twitter community. Find out your best time to tweet, discover the interests of a custom sample of users and endless extra features! Topsy - Real-time search for the social web With iOS 9, Search lets you look for content from the web, your contacts, apps, nearby places, and more. Powered by Siri, Search offers suggestions and updates results as you type. There are two ways to use Search on your iOS device. poynter Even the young person who sends and receives hundreds of text messages per day is unlikely to think of them as acts of reading and writing. Most text messages, including mine, are delivered in casual code for humdrum purposes, a mode of expression that makes communication seem as automatic as breathing. Roy: coffee?

JuxtaposeJS Juxtapose does not support uploading images. The URLs for the left and right image should be direct URLs to images, except if you are using Flickr to host images, in which case Juxtapose can transform the Flickr image page URL to the correct format. You can also use images stored on Dropbox.com by clicking on the button with the Dropbox logo. Services like Imgur and Photobucket generally prohibit 'hotlinking' to images they serve, which is what Juxtapose does, so those will not work, or will stop working after appearing to work. This page describes a method for using images stored on Google Drive, but this is not technically supported, and could stop working at any time.

Topsy: Now Searching Tweets Back To May 2008 Looking for old tweets? Look to Topsy. The service has just expanded to have what it claims to be the largest searchable collection of past tweets, over 5 billion of them, stretching back to at least May 2008. That makes it more comprehensive than Google’s Twitter search or even Twitter’s own Twitter Search. Topsy will be sharing the news itself later today, on its blog. Ten technical Twitter tips for journalists So you think you know Twitter? But do you know how to archive tweets, set up an RSS feed of a Twitter stream or have private group chat? Here are some practical, technical tips to help you:

How To Backup Your Twitter Archive With the Twitter fail whale popping up all the time, you never know when something tragic might happen. No one want to lose all of their Twitter tweets, followers, or anything else for that matter. That’s why it’s a good idea to backup your Twitter archive on a regular basis in case of a Twitter mishap. As we all know, there has been numerous times in the past where users have lost followers, tweets, and DMs. Fortunately, you can make sure this doesn’t happen to you by using one of the following methods to backup your Twitter archive. Tweetake Most journalists use social media such as Twitter and Facebook as a source A US survey has revealed that an overwhelming majority of reporters and editors use social media sources for researching their stories as 56% say social media is important for reporting and producing the stories they wrote. However, with 84% most journalists use information delivered via social media rather cautious as they think it is less reliable than information delivered via traditional media. According to the research conducted by Cision and The George Washington University, for their online research all journalists are using Google, followed by 61% which are turning to Wikipedia.

10 Top Twitter Tools Suggested By the Pros Yes, there are a ton of great Twitter Tools out there for you, but which ones should you pick? I thought one of the best ways to narrow your choice down is to get in touch with the real Social Media experts. I sent them an email and asked them about their recommended Tools for you. So here are the top 10 responses from the Twitter Pros out there.

Twitter, the conversation-enabler? Actually, most news orgs use the service as a glorified RSS feed As much as we tout Twitter for its conversational abilities — for its revolutionary capacity to create discursive, rather than simply distributive, relationships with news consumers — many major news organizations are still using the service as, pretty much, a vehicle for self-promotion. A new study, released today by Pew’s Project for Excellence in Journalism, studied 13 news organizations, large and (relatively) small, from print, TV, and radio…and found that “mainstream news organizations primarily use Twitter to move information and push content to readers. For these organizations, Twitter functions as an RSS feed or headline service for news consumers, with links ideally driving traffic to the organization’s website.” Fully 93 percent of the postings over the course of the week offered a link to a news story on the organization’s own website. And they really mean primarily using Twitter for self-promo.

lol, yes twitter: has a lot of third parties that make cool tools and applications that help you out and Snap Bird is one of them. Another really cool tool I like is the world map of tweets: (this pearl is in here also--A map of our tweets on our Globe). by electronics Sep 15