Essay: Anatomy of the Deep State 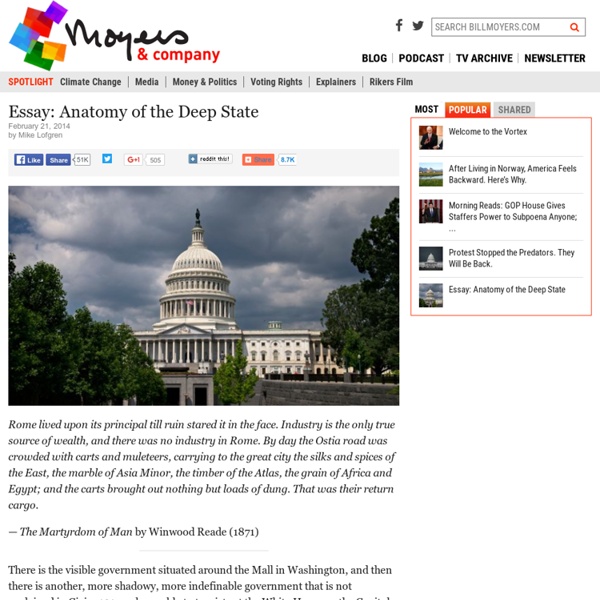 Rome lived upon its principal till ruin stared it in the face. Industry is the only true source of wealth, and there was no industry in Rome. By day the Ostia road was crowded with carts and muleteers, carrying to the great city the silks and spices of the East, the marble of Asia Minor, the timber of the Atlas, the grain of Africa and Egypt; and the carts brought out nothing but loads of dung. That was their return cargo. — The Martyrdom of Man by Winwood Reade (1871) There is the visible government situated around the Mall in Washington, and then there is another, more shadowy, more indefinable government that is not explained in Civics 101 or observable to tourists at the White House or the Capitol. During the last five years, the news media have been flooded with pundits decrying the broken politics of Washington. These are not isolated instances of a contradiction; they have been so pervasive that they tend to be disregarded as background noise. Photo: Dale Robbins

The Simplest, Easiest PC Linux Ever You've probably heard of the Raspberry Pi. It's a fully-fledged computer, the size of a deck of cards, that costs $35 and runs Linux. It was originally hoped that a few thousand people would be interested in buying one, yet a few months ago the figure hit an astonishing 10 million. The latest model really is powerful enough to use for almost all your non-gaming requirements, including web browsing and word processing. AP FACT CHECK: Trump takes credit where it's not deserved - - March 07, 2017 WASHINGTON (AP) — The start of a new administration is never a clean slate, even when parties flip. Day One is just another day for military operations, a budget that is still in place from the old crowd and a vast array of economic, social and law enforcement initiatives left over from the last president. You would not know this from President Donald Trump. He loudly and proudly takes credit for any positive development that has bloomed since he took office Jan. 20, even when the roots and buds of it were from President Barack Obama's time.

How Trump’s White House Could Mess With Government Data Numbers and data are a backbone of modern life. We cite them buzzily at bars and soberly to bosses so often that “studies show” might as well be given its own entry in the dictionary. Much of what we cite comes from government data — weather patterns, the population or average income of a city, even honeybee activity — collected across innumerable departments, agencies and centers, then made public. Now, watchdogs are worried that a Donald Trump administration could erode the quality of government data collection and systems. Transparency advocates have raised the possibility that a Trump administration could simply remove data sets. Robotics Expert Predicts Kids Born Today Will Never Drive a Car Free Price Quote From a Local Dealer Technology is moving very quickly these days – so fast that predictions of what the future will look like are constantly changing. One day someone is predicting that the majority of cars in the U.S. will be electric, but still human-driven, and the next someone else is telling us most cars will be autonomous and won’t even be owned by those riding in them. The latest prediction posits that babies born today will never drive a car. Ever. The prediction comes from Henrik Christensen, head of UC San Diego’s Contextual Robotics Institute, who spoke with The San Diego Union-Tribune ahead of a big robotics forum being held at the university this coming February.

NASA Astronaut: Space Lessons of Scott Kelly's Year in Orbit By Scott Kelly A year ago, astronaut Scott Kelly returned to Earth after the longest time spent in orbit by an American. On his trip, with Russian cosmonaut Misha Kornienko, he executed experiments designed to examine mysteries of the human body and mind. His discoveries often reached beyond science. In a preview of his forthcoming memoir, Endurance, available October 17, Kelly shares how his time in space informed his first year back on Earth. I think sometimes people want to hear there was one profound scientific discovery from the 340 days I spent circling the planet — something that struck me or the scientists on the ground like a cosmic ray through the skull at some climactic moment during my mission.

Trump appears to be muzzling scientists just like Canada did A North American nation elected a leader known for hostility to science and affection for the domestic oil industry. After the new administration took power, government scientists stopped speaking freely to the press. Questions had to be sent by email and routed through central approval. Scientists were told not to talk about hot-button issues including climate, oil, forestry, and other environmental concerns. We Need to Teach Kids How to Be Skeptical of the Internet The internet is a beautiful escape, the world's most wide-reaching communication device, the biggest business ever conceived, and a leveler of who has the tools to create art. But it’s also a perfectly-honed propaganda machine that bounces back our biases so often it’s become a hazard to the future. According to a year-long study from Stanford researchers, the inability of young students to tell “fake news” from real news is alternately “dismaying,” “bleak,” and a “threat to democracy.”

The 1930s were humanity's darkest, bloodiest hour. Are you paying attention? Even to mention the 1930s is to evoke the period when human civilisation entered its darkest, bloodiest chapter. No case needs to be argued; just to name the decade is enough. It is a byword for mass poverty, violent extremism and the gathering storm of world war. “The 1930s” is not so much a label for a period of time than it is rhetorical shorthand – a two-word warning from history. Witness the impact of an otherwise boilerplate broadcast by the Prince of Wales last December that made headlines: “Prince Charles warns of return to the ‘dark days of the 1930s’ in Thought for the Day message.” Or consider the reflex response to reports that Donald Trump was to maintain his own private security force even once he had reached the White House.

Man Without Grace Meets Party Without Conscience Just one week into the Trump presidency, Republicans have already shown they are unwilling to stand up to the worst of his instincts. Donald Trump is off to quite a start. He sits atop a globally despised kakistocracy whose first 24 hours included historic opposition marches around the country (and indeed around the world) and top White House flaks beclowning themselves and eviscerating their credibility with shouted lies and the absurdity of “alternative facts.”

Anti-surveillance clothing aims to hide wearers from facial recognition The use of facial recognition software for commercial purposes is becoming more common, but, as Amazon scans faces in its physical shop and Facebook searches photos of users to add tags to, those concerned about their privacy are fighting back. Berlin-based artist and technologist Adam Harvey aims to overwhelm and confuse these systems by presenting them with thousands of false hits so they can’t tell which faces are real. The Hyperface project involves printing patterns on to clothing or textiles, which then appear to have eyes, mouths and other features that a computer can interpret as a face. This is not the first time Harvey has tried to confuse facial recognition software. During a previous project, CV Dazzle, he attempted to create an aesthetic of makeup and hairstyling that would cause machines to be unable to detect a face.

Donald Trump Cuts Library Funding - Institute of Museums and Library Services FundingCut When you introduce yourself as a librarian at a dinner party — as I have been doing for my whole adult life — you usually receive one of two responses: either the dreaded “But wait … aren’t libraries, like … dying? Because of Google?” or the well-intentioned, but gently incorrect “You must love books, huh?” It’s not that librarians don’t typically love books — most of us do! But our (not even remotely dead) profession’s true backbone isn’t mere bookishness — it’s a near-pathological enthusiasm for helping people.

US in the middle of a coup by Donald Trump - The Independent The US is in the middle of a coup and hasn't realised, according to Michael Moore. The filmmaker and journalist, who was one of the few famous people to publicly predict that Donald Trump would become President, has warned that the US state is being overthrown by Mr Trump and the people he has appointed to govern alongside him. Linking to a New York Times piece about the role of senior advisor Steve Bannon, he posted on Twitter: "If you're still trying to convince yourself that a 21st century coup is not underway, please, please snap out of it".

Related:
Related:  Useful information   -  Contemporary History   -  Donnie   -  US in the middle of a coup by Donald Trump, Michael Moore warns | The Independent