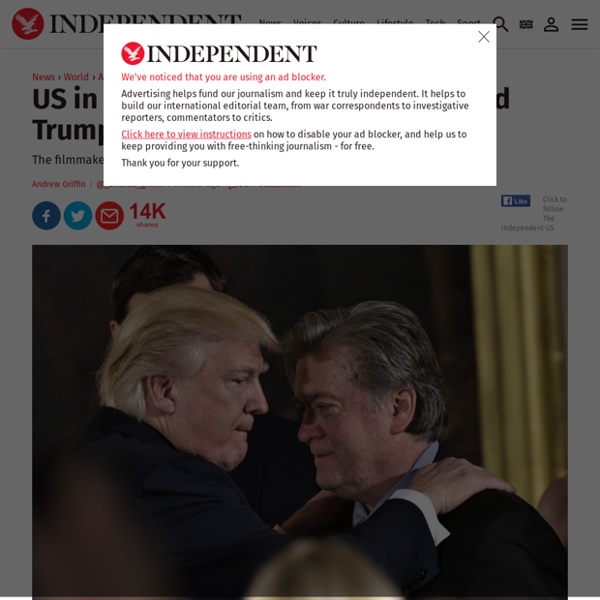 The US is in the middle of a coup and hasn't realised, according to Michael Moore. The filmmaker and journalist, who was one of the few famous people to publicly predict that Donald Trump would become President, has warned that the US state is being overthrown by Mr Trump and the people he has appointed to govern alongside him. Linking to a New York Times piece about the role of senior advisor Steve Bannon, he posted on Twitter: "If you're still trying to convince yourself that a 21st century coup is not underway, please, please snap out of it". The controversial orders Donald Trump has already issued The article described how Mr Bannon, who until recently ran the far-right news site Breitbart News, had taken a major role in national security policy that usually would only be occupied by senior generals. Mr Trump replaced Ms Yates with Dana Boente, who is thought to be much more favourable to the new administration. Donald Trump sacks acting attorney general over immigration ban Related:  Donnie • Usa

DB|Man Without Grace Meets Party Without Conscience Just one week into the Trump presidency, Republicans have already shown they are unwilling to stand up to the worst of his instincts. Donald Trump is off to quite a start. He sits atop a globally despised kakistocracy whose first 24 hours included historic opposition marches around the country (and indeed around the world) and top White House flaks beclowning themselves and eviscerating their credibility with shouted lies and the absurdity of “alternative facts.” Trump is an erratic figure – seemingly fragile, consumed by his own unpopularity and desperate to somehow exceed Barack Obama in public acclaim. If Trump is a man without grace, his daily outrages would not be possible were he not surrounded by men and women without honor. Republican lawmakers fret behind closed doors about the devastating impact of ripping away tens of millions of Americans’ healthcare, yet in public they grin along and say nothing; or duck their constituents and head for cover out the back door. Thank You!

Totalitarianism in the age of Trump: lessons from Hannah Arendt | US news In the scramble to make sense of the post-inauguration world, Amazon has been forced to restock a few key titles: Orwell’s Nineteen Eighty-Four hit No 1 at the end of last week, after Trump’s adviser Kellyanne Conway used the phrase “alternative facts” in place of “some bullshit I just made up”. But the surprise hit – being long, complex and demanding or, as the online magazine Jezebel described it, “extremely metal” – is Hannah Arendt’s The Origins of Totalitarianism, first published in 1951. Commentators have been referencing the work since Donald Trump’s election in November but rarely has this spurred so many people to actually buy a copy. In it, the political theorist (she always explicitly rejected the term “philosopher”) details the trajectory: “antisemitism (not merely hatred of Jews), imperialism (not merely conquest), totalitarianism (not merely dictatorship)” are considered in their interrelation. Two points come out of that.

In Case It Wasn't Clear Yet, Steve Bannon Is Our President (Photo by Matt McClain/The Washington Post via Getty Images) Donald Trump is just a puppet who doesn’t care about anything. If Donald Trump has shown anything during his first eleven days in office, it's that he's a coward with no ideas of his own, who is more than happy to be a puppet for the true president of the United States: Steve Bannon. Sure, Trump acts like he's in charge, but that's because he's too dumb to realize that Bannon is so obviously pulling the strings that he's become a joke. A real, impressive winner (not a Fake! Sad! And, as if that weren't enough, in an unprecedented move, Steve Bannon has been appointed to the National Security Council even as the chairman of the Joint Chiefs of Staff and the director of national intelligence were demoted. ...who sits at the National Security Council table when the administration debates issues of war and peace can make a real difference in decisions. "[Donald Trump is a] blunt instrument for us,” he told me earlier this summer.

Snopes|No Evidence Trump Told People Magazine Republicans Are the "Dumbest Group of Voters" Claim: Donald Trump said in 1998 that he would one day run as a Republican because they are the "dumbest group of voters." Origin:The above-reproduced image and quote attributed to Donald Trump began appearing in our inbox in mid-October 2015. The format is easily recognizable as one wherein questionable or offensive words are attributed to the individual pictured, and in this case image claims that Donald Trump made the following statement in a 1998 interview with People magazine: If I were to run, I'd run as a Republican. They're the dumbest group of voters in the country. They believe anything on Fox News. Despite People's comprehensive online content archive, we found no interview or profile on Donald Trump in 1998 (or any other time) that quoted his saying anything that even vaguely resembled the words in this meme. Trump's political endeavors (or the absence of them) did rate some space on the magazine's pages, though. I'm a registered Republican. Mr.

Google's Eric Schmidt: Trump Administration Will Do "Evil Things" - BuzzFeed News Listen Up, Progressives: Here’s How to Deal with a 4Chan (“Alt-Right”) Troll Needless to say, when an “alt-right” troll pops up in your social media feed, the best thing to do is ignore them. But sometimes — by dint of impatience, angst, or pique — you can’t help yourself and you engage the troll directly. It can be a cathartic experience, provided you indulge it sparingly. One other note about “alt-right” trolls, before I get to the “Q&A” portion of this how-to article: if you’re a progressive accustomed to feeling empathy for those who are vulnerable and hurting, you’ll find yourself developing some real sympathy for this particular brand of troll over time. My point here is, alt-right trolls do everything within their power to appear to be neo-Nazis online — and there’s a reasonable argument to be made that, when you inhabit a role perpetually, you in practical terms become what you pretend to be. Okay, so with all that said, let’s begin. Q: Where do alt-right trolls come from? The simple fact is that most alt-right trolls come from 4chan’s “/pol/” board.

Trump campaign promise tracker - Washington Post The Inevitability Of Impeachment | The Huffington Post Outline|Trump appears to be muzzling scientists just like Canada did A North American nation elected a leader known for hostility to science and affection for the domestic oil industry. After the new administration took power, government scientists stopped speaking freely to the press. Questions had to be sent by email and routed through central approval. Scientists were told not to talk about hot-button issues including climate, oil, forestry, and other environmental concerns. That’s what happened in Canada after Prime Minister Stephen Harper was elected in 2006. According to an internal email sent Monday and obtained by BuzzFeed News, the Agricultural Research Service, which is responsible for about half of the agency’s $2.5 billion research and development budget, is shutting itself off from the public. There is little doubt that this muzzling is in line with the wishes of the Trump administration. Some foresaw that Trump might try to muzzle scientists. In Canada, muzzling was followed by government funding cuts and thousands of scientist layoffs.