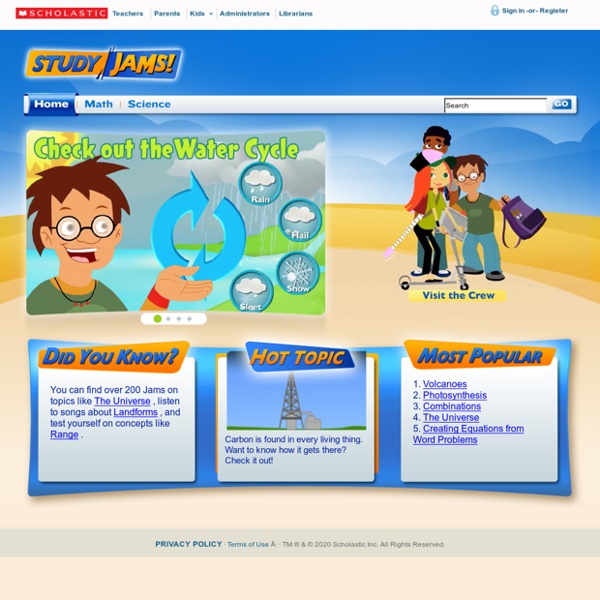 Children Around The World - Discovery Education A is for Africa Ifeoma Onyefula, Cobblehill Books, 1993 This Nigerian author's book of words and pictures shows us the many faces and worlds of African people. Africa (Eyewitness Books) Yvonne Ayo, Dorling Kindersley Books, 1995 Beautiful illustrations and brief descriptions describe life in Africa. Read about the social life and customs, history, clothes, myths, medicine, houses, musical instruments, and food of Africa. Welcome to the Green House: a Story of the Tropical Rainforest Jane Yolen, G.P.

Assessment Instruments for Use with Students from Culturally and Linguistically Diverse Backgrounds Compiled by Olaya Landa-Vialard, Ed.D., CTVI Contents Criterion-Referenced Assessment: Curriculum-Based Assessment: Norm-Referenced Assessments/Inventories: How do we know what color dinosaurs were? - Len Bloch The dinosaurs were a large group of animals that first appeared in the fossil record about 227 million years ago. Then, about 65 million years ago, most of the dinosaurs went extinct, but one group– the birds– continues to thrive. The era during which the non-avian dinosaurs lived is called the Mesozoic. The Mesozoic is divided into three periods called the Triassic, Jurassic, and Cretaceous; the bird-like dinosaurs didn't appear until the Jurassic, and they continued into the Cretaceous.

3 Ways to Plan for Diverse Learners: What Teachers Do In The Wizard of Oz, Dorothy and crew are so intimidated by the Wizard’s enigmatic personality that they struggle to talk with him on equal footing. Fear and frustration overwhelm them as they blindly accept a suicide mission to slay the Witch of the West. In return, they each receive a treasured prize: a heart, a brain, courage, and a way home. Ironically, they already have these gifts—which they only discover after unveiling the man behind the curtain posing as the grumpy wizard.

Clil4U CLIL implementation with pools of resources for teachers, students, and pupils Back to Top The project needs were based on several reports, e.g. Eurydice “Content and Language Integrated Learning (CLIL) at School in Europe 2006” which in “Factors inhibiting general implementation” points at a need for training language teachers in the special skills needed to provide CLIL through initial and in-service training programs devoted to methods used to teach a subject in other languages. The report also points at a need for teaching materials geared to CLIL in the target language that cover subjects in the national curriculum.

Early Reading Assessment: A Guiding Tool for Instruction Click the "References" link above to hide these references. Armstrong, Thomas (1994). Multiple intelligences in the classroom. Berritzegune Nagusia A Content-Based approach to teaching and learning second languages has been adopted both for INEBI and BHINEBI. The content-based teaching-learning approach provides a very adequate frame to organise various aspects of this proposal. It helps make the acquisition of language parallel to that of natural language acquisition and of concept development. This approach promotes the teaching of languages through the teaching of contents and it is based on a communicative methodology, far away from the traditional and grammatical language teaching methods that propose unreal and often irrelevant activities.