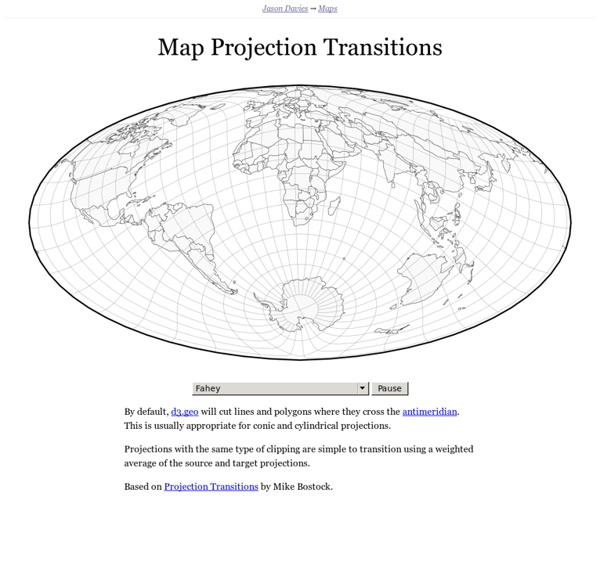 9 Excellent Free Map Creation Tools for Teachers and Students 1- Umapper UMapper is a great mapping tool for educators. It allows its users to create and manage interactive maps and geogames online. These maps can be shared with others or be embedded in blogs and websites Wind Map An invisible, ancient source of energy surrounds us—energy that powered the first explorations of the world, and that may be a key to the future. This map shows you the delicate tracery of wind flowing over the US. The wind map is a personal art project, not associated with any company. We've done our best to make this as accurate as possible, but can't make any guarantees about the correctness of the data or our software. Please do not use the map or its data to fly a plane, sail a boat, or fight wildfires :-)

The #1 reason people die early, in each country You're probably aware that heart disease and cancer are far and away the leading causes of death in America. But globally the picture is more complicated: (Vox / Anand Katakam and Joss Fong) It's worth stressing that "cause of lost years of life" and "cause of death" aren't identical. For example, deaths from preterm births may cause more lost years of life in a country than deaths from heart disease even if heart disease is the leading cause of death. Deaths from preterm births amount to many decades of lost life, whereas heart disease tends to develop much later on.

Everything Sings - Siglio Press Intro by Ira Glass, essays by Albert Mobilio and Ander Monson, interview by Blake Butler. That a cartographer could set out on a mission that’s so emotional, so personal, so idiosyncratic, was news to me. —IRA GLASS, host of This American Life, from his introduction to Everything Sings. Iconoclastic geographer Denis Wood has created an atlas unlike any other. He surveys his small, century-old neighborhood Boylan Heights in Raleigh, North Carolina by first paring away the inessential (scale, orientation, street grids), then by locating the revelatory in the unmapped and unmappable: radio waves permeating the air, the paperboy’s route in space and time, the light cast by street lamps, Halloween pumpkins on porches. His joyful subversion of the traditional notions of map making forge new ways of seeing not only this particular place, but also the very nature of place itself.

32 maps that will teach you something new about the world EVER THOUGHT TO YOURSELF, “How many smaller countries could you fit into Australia?” Or possibly, “Which countries in the western hemisphere have legit secessionist movements?” Or, perhaps most pressing of all, “Where does it pay best to be a lifeguard?” We live in the age of the map now, so these are no longer questions you have to continue simply wondering about. Michael Pecirno's Minimal Maps Single Out American Land Use Patterns Most maps of the U.S. prioritize metropolitan areas. But "Minimal Maps" single out the nation's forests, crops, and waterbodies. Eighty percent of the U.S. population lives in "urban" areas, a staggering 249,253,271 souls. Yet these folks live in just 3 percent of the country's 2.3 billion acres of land. Most of America's 50 states are forestland (30 percent), pasture and ranges (27 percent), and crops (18 percent), with parks, tundra, and swamps making up the rest.

Atlas for a Changing Planet Understanding natural and human systems is an essential first step toward reducing the severity of climate change and adapting to a warmer future. Maps and geographic information systems are the primary tools by which scientists, policymakers, planners, and activists visualize and understand our rapidly changing world. Spatial information informs decisions about how to build a better future. Scroll down or click below to explore a sampling of maps from Esri's ArcGIS Online resource on these themes: 1. Understanding Natural Systems