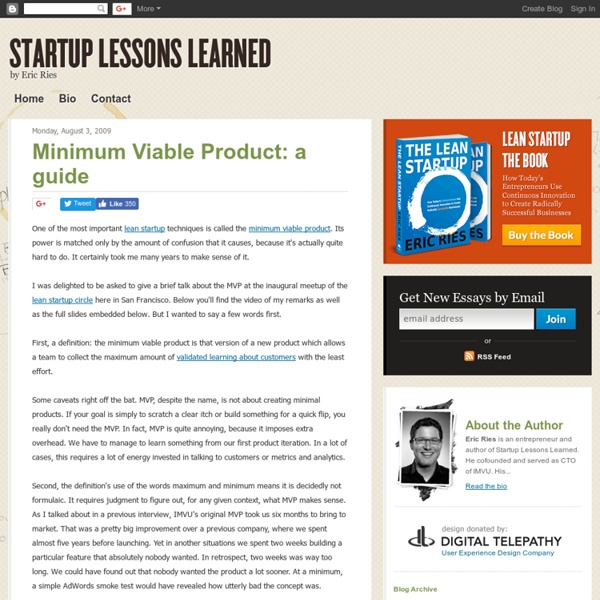 One of the most important lean startup techniques is called the minimum viable product. Its power is matched only by the amount of confusion that it causes, because it's actually quite hard to do. It certainly took me many years to make sense of it. I was delighted to be asked to give a brief talk about the MVP at the inaugural meetup of the lean startup circle here in San Francisco. Below you'll find the video of my remarks as well as the full slides embedded below. But I wanted to say a few words first. First, a definition: the minimum viable product is that version of a new product which allows a team to collect the maximum amount of validated learning about customers with the least effort. Some caveats right off the bat. Second, the definition's use of the words maximum and minimum means it is decidedly not formulaic. Without further ado, the video: Slides are below:

Definition, Beliefs, Founder, Nature and significance The ancient Greeks saw in Zoroastrianism the archetype of the dualistic view of the world and of human destiny. Zarathustra was supposed to have instructed Pythagoras in Babylon and to have inspired the Chaldean doctrines of astrology and magic. Post Mortem on a Failed Product Just over two years ago, at the beginning of 2008, we set out to build a web content management system with community functionality infused throughout — eCrowds. The idea was that companies would need a solution for facilitating product communities with the following functionality: Content managementForumsBlogsIdea exchangesWikis We were solving the traditional challenges brought on by disparate silos of data with separate user authentication systems and inconsistent interfaces/template designs. 2008 was spent building the product and we launched it for our own internal customer success communities after nine months of development. It was a failure. Here are some of our lessons learned:

Military Style Civilian Boot Camp Training NORTHERN FIREARMS TRAININGCivilian Military Style Training (scroll down to view all information and see camp photos) WE ADDED NEW SPOTS. 2018 Camp registrations are now closed!We do 1 camp a month starting in May till November (7 camps)Pick your Camp date and register today. Class Dates Below Why the Lean Start-Up Changes Everything Launching a new enterprise—whether it’s a tech start-up, a small business, or an initiative within a large corporation—has always been a hit-or-miss proposition. According to the decades-old formula, you write a business plan, pitch it to investors, assemble a team, introduce a product, and start selling as hard as you can. And somewhere in this sequence of events, you’ll probably suffer a fatal setback. The odds are not with you: As new research by Harvard Business School’s Shikhar Ghosh shows, 75% of all start-ups fail. But recently an important countervailing force has emerged, one that can make the process of starting a company less risky. It’s a methodology called the “lean start-up,” and it favors experimentation over elaborate planning, customer feedback over intuition, and iterative design over traditional “big design up front” development.

Three Rivers Institute » Blog Archive » Approaching a Minimum Viable Product The purpose of the MVP is to answer your most pressing question or validate your most pressing business assumption. Work backwards from question, not forwards from a feature list. For Tattlebird, my most critical assumption was that stuff was happening in browsers that site developers would care about. Trust Me, I’m Lying: Confessions of a Media Manipulator – RyanHoliday.net The cult classic that predicted the rise of fake news—revised and updated for the post-Trump, post-Gawker age. Hailed as “astonishing and disturbing” by the Financial Times and “essential reading” by TechCrunch at its original publication, former American Apparel marketing director Ryan Holiday’s first book sounded a prescient alarm about the dangers of fake news. It’s all the more relevant today.

Ten Rules for Web Startups #1: Be NarrowFocus on the smallest possible problem you could solve that would potentially be useful. Most companies start out trying to do too many things, which makes life difficult and turns you into a me-too. Focusing on a small niche has so many advantages: With much less work, you can be the best at what you do. Small things, like a microscopic world, almost always turn out to be bigger than you think when you zoom in.

Rice University Startup Accelerator Preparing for the Application Process The application is divided into three sections: (1) the technology, (2) the startup team, and (3) the founder(s). You should be prepared to provide detailed, concise answers to questions surrounding each of these topics. Minimum Viable Product rant Lately, you can’t swing a dead cat at a gathering of Internet entrepreneurs without hitting someone in mid-sentence talking about their “minimum viable product.” The problem is that half the time, I don’t hear them talking about minimum viable products. I hear them talking about “minimum products.” Entrepreneurship Essentials - HBX - Harvard Business School Master a proven framework for building and financing new ventures, make your entrepreneurial dreams a reality, and speak the language of the start-up world. Entrepreneurship Essentials introduces you to the entrepreneurial journey, from finding an idea, to gaining traction in the marketplace, to raising capital for your venture. In this online course, you will learn an overarching framework—People, Opportunity, Context, Deal—to evaluate opportunities, manage start-ups, and finance ventures.

Monitor110: A Post Mortem Turning Failure into Learning Writing a post mortem is hard, particularly when the result is failure: a failed deal; a failed investment; a failed concept. That said, without a post mortem, without deep reflection, honesty and introspection, how can we get better and do better the next time? How Masculinity Contests Undermine Organizations, and What to Do About It Executive Summary From Uber to Nike to CBS, recent exposés have revealed seemingly dysfunctional workplaces rife with misconduct, bullying, and sexual harassment. Why do companies get caught up in illegal behavior, harassment, and toxic leadership? Researchers identify an underlying cause: a Masculinity Contest Culture. This kind of culture endorses winner-take-all competition, where winners demonstrate masculine traits such as emotional toughness, physical stamina, and ruthlessness.

Communicating with code Some people can sell their ideas with a brilliant speech or a slick powerpoint presentation. I can't. Maybe that's why I'm skeptical of ideas that are sold via brilliant speeches and slick powerpoints. Or maybe it's because it's too easy to overlook the messy details, or to get caught up in details that seem very important, but aren't. I also get very bored by endless debate.