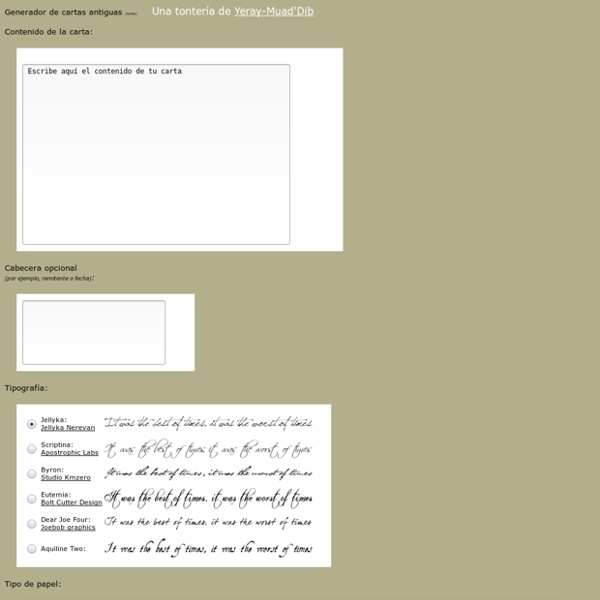 Experimental game turns players into poets and writers What do British Romantic Era poets and video games have in common? The answer is Elegy for a Dead World, an unlikely game that leaves the players with “no game to play,” but to explore three long-dead civilizations, observe, and make notes... or stories — or poems — or songs. The three lost worlds feature beautiful scenery, moving music, and are inspired by Percy Shelley's Ozymandias, Lord Byron's Darkness, and John Keats' When I Have Fears That I May Cease to Be. They create a strong, moody atmosphere that becomes the breeding ground for feelings and ideas. The game began in 2013 as a collaboration between Dejobaan Games and Popcannibal. Ziba Scott, one of the creators says, “We have three great Romantic poets — Shelley, Byron, and Keats — and they each wrote these really moving poems about end times, the end of the world.

5 Tools to Convert and Edit The PDF Format Advertisement PDF files are the digital equivalent of the paper document: made to be shared and read, and occasionally filled in like a form, but not really intended to be easily edited. You could argue the format is outdated in our increasingly post-paper world, but PDF documents aren’t going anywhere anytime soon.

Quillionz - Get Quiz Questions Automatically Generated From Documents Quillionz is a new supporter of FreeTech4Teachers.com Quillionz is a new service that makes it super easy to have a set of reading comprehension questions and quiz questions generated from a passage of text. There is a free version and pro (paid) version of Quillionz. This post is about the capabilities of the free version. To get started using Quillionz you will need to create a free account on the site. Alphabet to Numbers Translator Translate character of the alphabet into a simple number cipher! What is a cipher? A cipher is a series of operations which transforms something which can be easily understood into something which is very hard to understand. A cipher is used to "encrypt" a message so that it won't be able to be understood if it gets into the wrong hands.

Trading Card: Turn your photos into trading cards! Tons of fun stuff... Give one of our toys a spin! Calendar, Jigsaw, Magazine Cover, Framer, Pop Art Poster, Trading Card, Motivator, Bead Art, Mat, Hockneyizer, Lolcat Generator, Map Maker, Color Palette Generator, Wallpaper, Mosaic Maker, Badge Maker, Cube, Billboard, Movie Poster, Pocket Album, FX, Photobooth, CD Cover, 5 Best Prezi Presentation Alternatives by PowToon! In the last couple of years many people have been searching for innovative ways to create executive, unique, and memorable presentations. PowerPoint was exciting in the early days of its launch, but too many boring presentations led to the creation of new softwares like Prezi. Prezi presentations helped to prevent us from falling asleep during presentations, but the zooming in and out effects of their software, and limited manipulation capabilities, called for more options and new players in the presentation market. 1. PowToon – Best Prezi Alternative

15 Great Tools to Publish Student Writing - Practutor Blog Why do kids give their best when playing baseball? It isn’t a test, and nobody is going to invite them to join the Major League only because they performed well in one game. Why do children love devoting themselves to a baseball game, even though, it is not being assessed?

How to use Snapchat in the laboratory for better student engagement The Snapchat image and video instant messaging application has rocketed in popularity among teenagers. Since 2012, the number of active users climbed from 10 million to more than 100 million in early 2015. More than 400 million snaps were received by users daily in December. In contrast, it would take both Facebook and Instagram combined to achieve the equivalent numbers in a single month. Snapchat has been trialled in a few schools. However, it has yet to be implemented on a larger scale in education, and even more specifically, no lecturer has integrated Snapchat into chemistry laboratory teaching.