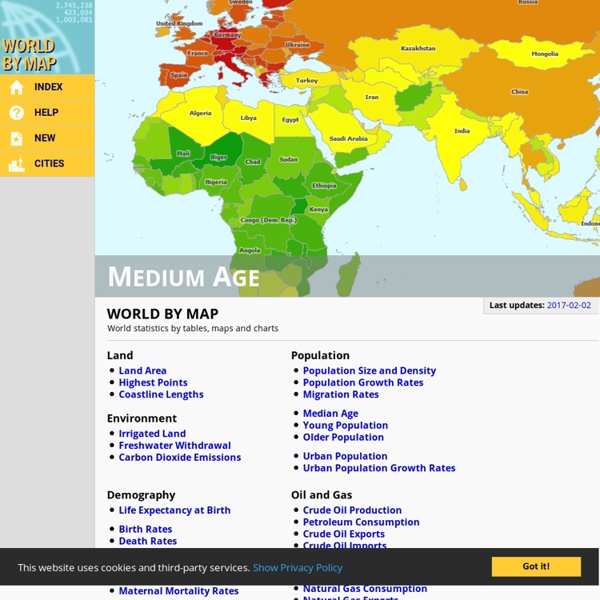 OpenStreetMap Where is this? Reverse Directions Welcome to OpenStreetMap! OpenStreetMap is a map of the world, created by people like you and free to use under an open license. Hosting is supported by UCL, Bytemark Hosting, and other partners. Learn More Start Mapping You decide Australia's population, we'll show you how it looks Australia's population has more than quadrupled in the past century, with the number of people tipped to reach 25 million this year. If current trends continue the population will top 40 million within 40 years. Some say Australia should have stopped growing decades ago. Others point out Australia is a wealthy country with plenty of space to welcome more. This is your chance to decide how big (or small) you think Australia should be.

9 Excellent Free Map Creation Tools for Teachers and Students 1- Umapper UMapper is a great mapping tool for educators. It allows its users to create and manage interactive maps and geogames online. These maps can be shared with others or be embedded in blogs and websites Origin of crops by Colin K. Khoury, Harold A. Achicanoy, Carlos Navarro-Racines, Steven Sotelo, and Andy Jarvis at the International Center for Tropical Agriculture (CIAT). Version 1.0 (May 2016). This work is licensed under a Creative Commons Attribution 4.0 International (CC BY 4.0). This work is associated with the publication:

Glossary of geography terms A[edit] absolute humidity The mass of water vapor in the atmosphere per unit of volume of space.[1] absolute location The location of a point on the Earth's surface that can be expressed by a grid reference such as latitude and longitude.[2] The #1 reason people die early, in each country You're probably aware that heart disease and cancer are far and away the leading causes of death in America. But globally the picture is more complicated: (Vox / Anand Katakam and Joss Fong) It's worth stressing that "cause of lost years of life" and "cause of death" aren't identical. For example, deaths from preterm births may cause more lost years of life in a country than deaths from heart disease even if heart disease is the leading cause of death. Deaths from preterm births amount to many decades of lost life, whereas heart disease tends to develop much later on.