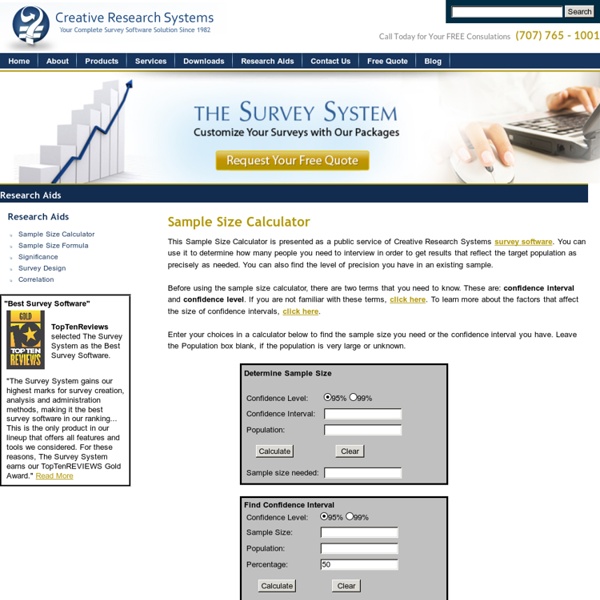 This Sample Size Calculator is presented as a public service of Creative Research Systems survey software. You can use it to determine how many people you need to interview in order to get results that reflect the target population as precisely as needed. You can also find the level of precision you have in an existing sample. Before using the sample size calculator, there are two terms that you need to know. These are: confidence interval and confidence level. If you are not familiar with these terms, click here. Enter your choices in a calculator below to find the sample size you need or the confidence interval you have. Sample Size Calculator Terms: Confidence Interval & Confidence Level The confidence interval (also called margin of error) is the plus-or-minus figure usually reported in newspaper or television opinion poll results. The confidence level tells you how sure you can be. Factors that Affect Confidence Intervals Sample sizePercentagePopulation size Sample Size Percentage

D - Distribution Stem and Leaf Displays Author(s) David M. Lane Prerequisites Distributions Types of Validity « PreviousHomeNext » There's an awful lot of confusion in the methodological literature that stems from the wide variety of labels that are used to describe the validity of measures. I want to make two cases here. First, it's dumb to limit our scope only to the validity of measures. We really want to talk about the validity of any operationalization. That is, any time you translate a concept or construct into a functioning and operating reality (the operationalization), you need to be concerned about how well you did the translation.

Social Research Methods/Indexes, Scales, Typologies Indices, Scales and Typologies Quantitative data analysis requires the construction of two types of measures of variables--indices and scales. These measures are frequently used and are important since social scientists often study variables that possess no clear and unambiguous indicators--for instance, age or gender. Researchers often centralize much of work in regards to the attitudes and orientations of a group of people, which require several items to provide indication of the variables. neuroecology I was recently reading an article on the psychology of why we cry (via): In a study published in 2000, Vingerhoets and a team of researchers found that adults, unlike children, rarely cry in public. They wait until they’re in the privacy of their homes—when they are alone or, at most, in the company of one other adult. On the face of it, the “crying-as-communication” hypothesis does not fully hold up, and it certainly doesn’t explain why we cry when we’re alone, or in an airplane surrounded by strangers we have no connection to…In the same 2000 study, Vingerhoet’s team also discovered that, in adults, crying is most likely to follow a few specific antecedents. When asked to choose from a wide range of reasons for recent spells of crying, participants in the study chose “separation” or “rejection” far more often than other options, which included things like “pain and injury” and “criticism.” Although biological reasons have been proposed, they often seem a bit silly to me.

D - When to Use Mean, Median, or Mode When not to use the mean The mean has one main disadvantage: it is particularly susceptible to the influence of outliers. These are values that are unusual compared to the rest of the data set by being especially small or large in numerical value. G*Power 3 G*Power is a tool to compute statistical power analyses for many different t tests, F tests, χ2 tests, z tests and some exact tests. G*Power can also be used to compute effect sizes and to display graphically the results of power analyses. Whenever we find a problem with G*Power we provide an update as quickly as we can. We will inform you about updates if you Statistics: An Introduction Writing@CSU Guide Statistics is a set of tools used to organize and analyze data. Data must either be numeric in origin or transformed by researchers into numbers. For instance, statistics could be used to analyze percentage scores English students receive on a grammar test: the percentage scores ranging from 0 to 100 are already in numeric form.

What You've Learned About Yourself On Monday I included the following prompt for checking in with ourselves: Write what you’ve learned about yourself today. Asking yourself this question not only helps you get to know yourself better (the foundation for a healthy and meaningful life); it also helps you see how you’d like to grow and build a more honest relationship with yourself and your world. When we know ourselves we can make decisions that nourish us. We can practice exquisite self-care. We can say no to commitments that won’t work for us. D - Collecting and Analyzing Data What do we mean by collecting data?What do we mean by analyzing data?Why should you collect and analyze data for your evaluation? G*Power Data Analysis Examples: Power analysis for two-group independent sample t-test G*Power Data Analysis Examples Power analysis for two-group independent sample t-test NOTE: This page was developed using G*Power version 3.0.10. You can download the current version of G*Power from . You can also find help files, the manual and the user guide on this website. Examples

A Beginner's Guide to Mean, Median and Mode An average summarises a group of numbers. There are three main types of averages: mean, median and mode. Each of these will be looked at in turn. Mean The Social Life of Genes: Shaping Your Molecular Composition A few years ago, Gene Robinson, of Urbana, Illinois, asked some associates in southern Mexico to help him kidnap some 1,000 newborns. For their victims they chose bees. Half were European honeybees, Apis mellifera ligustica, the sweet-tempered kind most beekeepers raise. The other half were ligustica’s genetically close cousins, Apis mellifera scutellata, the African strain better known as killer bees. Though the two subspecies are nearly indistinguishable, the latter defend territory far more aggressively. Kick a European honeybee hive and perhaps a hundred bees will attack you.

D - Likert Scale by Saul McLeod published 2008 Various kinds of rating scales have been developed to measure attitudes directly (i.e. the person knows their attitude is being studied). The most widely used is the Likert Scale. Likert (1932) developed the principle of measuring attitudes by asking people to respond to a series of statements about a topic, in terms of the extent to which they agree with them, and so tapping into the cognitive and affective components of attitudes. Likert-type or frequency scales use fixed choice response formats and are designed to measure attitudes or opinions (Bowling, 1997; Burns, & Grove, 1997). These ordinal scales measure levels of agreement/disagreement.

Linear Regression Analysis in SPSS - Procedure, assumptions and reporting the output. Introduction Linear regression is the next step up after correlation. It is used when we want to predict the value of a variable based on the value of another variable. The variable we want to predict is called the dependent variable (or sometimes, the outcome variable). The variable we are using to predict the other variable's value is called the independent variable (or sometimes, the predictor variable).