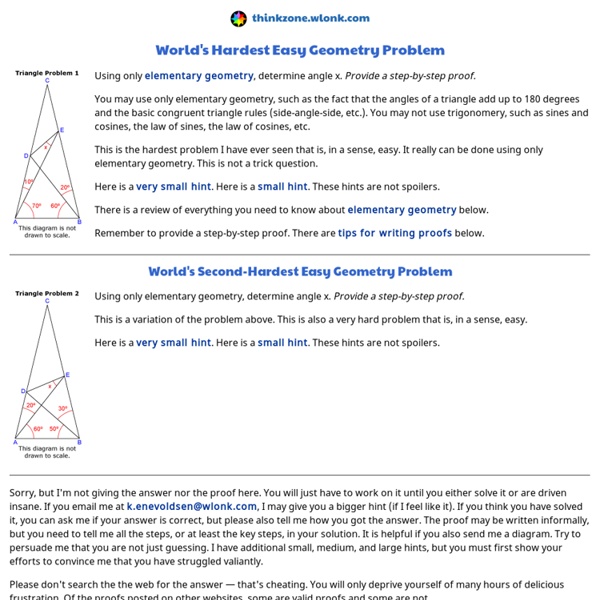 SS - Circle through 3 points Drawing a circle through three given points with compass and straightedge 1. Draw the only circle that passes through the three points below. 2. Draw the only circle that passes through the three points below. (C) Copyright John Page 2007 Evil Mad Scientist Laboratories - Iterative Algorithmic Plastic One of our favorite shapes is the Sierpinski triangle. In one sense, a mere mathematical abstraction, on the other, a pattern that naturally emerges in real life from several different simple algorithms. On paper, one can play the Chaos Game to generate the shape (or cheat and just use the java applet). You can also generate a Sierpinski triangle in what is perhaps a more obvious way: by exploiting its fractal self-similarity. We begin with a few packages of polymer clay– two colors of Fimo Soft, in this case. Form the two clay colors into long triangular shapes. Press the stack of triangles together to make sure that the edges fuse well. Cut the stretched “first iteration” piece into four pieces of equal length. Again stretch the result from the previous iteration, cut into four pieces of equal length and set one aside. By now, you should have the hang of the iterative algorithm for making the fractal. The fifth iteration has 243 dark triangles.

SS - Constructions Introduction to constructions Constructions: The drawing of various shapes using only a pair of compasses and straightedge or ruler. No measurement of lengths or angles is allowed. The word construction in geometry has a very specific meaning: the drawing of geometric items such as lines and circles using only compasses and straightedge or ruler. Compasses Compasses are a drawing instrument used for drawing circles and arcs. This kind of compass has nothing to do with the kind used find the north direction when you are lost. Straightedge A straightedge is simply a guide for the pencil when drawing straight lines. Why we learn about constructions The Greeks formulated much of what we think of as geometry over 2000 years ago. Why did Euclid do it this way? Why didn't Euclid just measure things with a ruler and calculate lengths? One theory is the the Greeks could not easily do arithmetic. To find out more Constructions pages on this site Lines Angles Triangles Right triangles Triangle Centers

Magical Square Root Implementation In Quake III Any 3D engine draws it’s power and speed from the mathematical models and implementations within, and trust John Carmack of ID software for using really good hacks. As it turns out, a very interesting hack is used in Quake III to calculate an inverse square root. Preface ID software has recently released the source code of Quake III engine with a GPL license. Carmack’s Unusual Inverse Square Root A fast glance at the file game/code/q_math.c reveals many interesting performance hacks. Observe the original function from q_math.c: float Q_rsqrt( float number ) { long i; float x2, y; const float threehalfs = 1.5F; x2 = number * 0.5F; y = number; i = * ( long * ) &y; // evil floating point bit level hacking i = 0x5f3759df - ( i >> 1 ); // what the fuck? Not only does it work, on some CPU’s Carmack’s Q_rsqrt runs up to 4 times faster than (float)(1.0/sqrt(x), eventhough sqrt() is usually implemented using the FSQRT assembley instruction! Newton’s Approximation of Roots A Witchcraft Number

The trouble with five December 2007 We are all familiar with the simple ways of tiling the plane by equilateral triangles, squares, or hexagons. These are the three regular tilings: each is made up of identical copies of a regular polygon — a shape whose sides all have the same length and angles between them — and adjacent tiles share whole edges, that is, we never have part of a tile's edge overlapping part of another tile's edge. Figure 1: The three regular tilings. In this collection of tilings by regular polygons the number five is conspicuously absent. Why did I not mention a regular tiling by pentagons? Figure 2: Three pentagons arranged around a point leave a gap, and four overlap. But there is no reason to give up yet: we can try to find other interesting tilings of the plane involving the number five by relaxing some of the constraints on regular tilings. Is it now possible to find a set of shapes with five-fold symmetry that together will tile the plane? Going for simple shapes Penrose tilings

Project Euler SS - Platonic Realms Home Page Sally Simplewit's mother has been rearranging the dining room again, but she is frustrated; the place she wants to put the dining room table isn't working out, because the floor there is smooth but uneven, and she can't seem to get the table into a position where it doesn't rock. It is a round table, with four legs of equal length. Frustrated, she announces that she is going to get a saw and shorten one of the table's legs. "For," says Sally, "I guarantee I can get all four legs firmly on the floor without changing either the floor or the lengths of the legs!" Today's challenge: How can Sally make such a guarantee? Solution to yesterday's challenge THE MATH STORE LIVES! NEW FOR 2012: Platonic Realms is at last being rewritten and moved to a new server. This site is registered with the Internet Content Rating Association (ICRA), and is suitable for all ages.