7 myths about immigration and open US borders, debunked 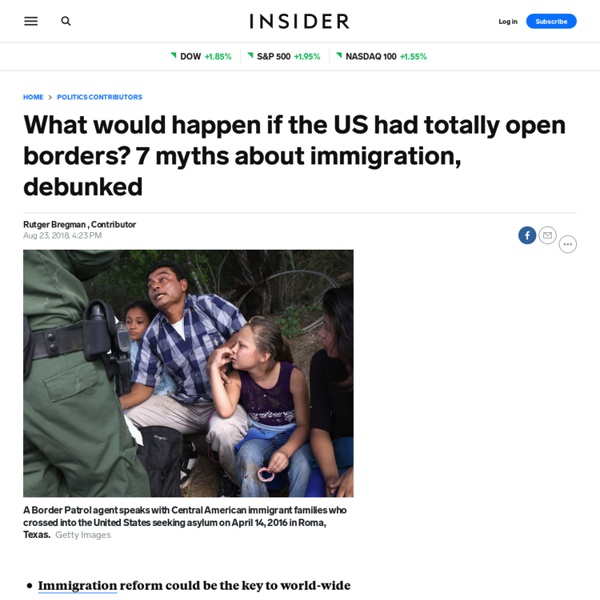 Have You Heard of The Great Forgetting? It Happened 10,000 Years Ago & Completely Affects Your Life (Excerpted from the book, The Story of B) With every audience and every individual, I have to begin by making them see that the cultural self-awareness we inherit from our parents and pass on to our children is squarely and solidly built on a Great Forgetting that occurred in our culture worldwide during the formative millennia of our civilization. What happened during those formative millennia of our civilization? Texas distorts its past – and Sam Houston's legacy – to defend Confederate monuments Texas has largely declined to participate in this nationwide reckoning with the symbols of the Old South. Instead, local officials are doubling down on their Confederate monuments. Republican State Sen.

Lac La Croix pony saved from extinction by the Ojibwe Photography by Alan Poelman Norman Jordan still remembers the day he saw the last horse disappear. He was 10 years old in 1977 when he witnessed some men haul away four Ojibwe ponies from the Lac La Croix First Nation, part of Treaty 3 territory in northwestern Ontario. Slated to be destroyed by the Canadian government, those four mares were all that remained of these horses, kindred spirits that had always lived with and around Jordan’s people in this dense swath of boreal forest.

What Moving House Can Do for Your Happiness Perhaps you can relate to my seatmate: feeling out of place, and as though where you live is not truly your home. That might be especially true today, when so many people have been involuntarily displaced by the pandemic or are stuck in living situations not of their own choosing. Read: The high cost of panic-moving But this upheaval could also provide an opportunity. How Cultural Anthropologists Redefined Humanity Not that long ago, Margaret Mead was one of the most widely known intellectuals in America. Her first book, “Coming of Age in Samoa,” published in 1928, when she was twenty-six, was a best-seller, and for the next fifty years she was a progressive voice in national debates about everything from sex and gender to nuclear policy, the environment, and the legalization of marijuana. (She was in favor—and this was in 1969.) She had a monthly column in Redbook that ran for sixteen years and was read by millions.

"The Ethnic Origins Of Beauty" Shows The Real Scale Of Human Diversity And How Beautiful It Is (30 Pics) Beauty has no nationality or race—and although our world is slowly moving towards a place where this statement is accepted by all people, a part of our society needs a little reminder of that. This is exactly the mission of "The Ethnic Origins of Beauty," a project that highlights the ethnic diversity of mankind through gorgeous portraits of women of different ethnic groups across the world. This non-profit art and documentary project started in 2012 by Paris-based Russian photographer, producer, and documentary filmmaker Natalia Ivanova, and is still going strong. To prove that we live in a rich, beautiful, and diverse world, and it's never going to change, she has chosen a universal language of beauty.

Reading the Fine Print: What Trump Didn't Sign WASHINGTON, DC - JANUARY 30: Jared Kushner, senior adviser to President Donald Trump, listens during a meeting with small business leaders in the Roosevelt room at the White House in Washington, DC on Monday, Jan. 30, 2017. (Photo by Jabin Botsford/The Washington Post via Getty Images) December 27, 2020 Tonight, Trump relented and signed the Consolidated Appropriations Act of 2021, which includes the coronavirus relief measure and the 2021 appropriations bill (along with other measures). He accompanied it with a statement claiming he would demand changes to the law, but these have no force; Congress will almost certainly ignore him. He also continued to pressure Senate Republicans to increase payments to individuals and families, saying that the House would vote to increase the amount of stimulus payments on Monday and that the Senate should agree.

Stacey Abrams and Lauren Groh-Wargo: How to Turn Your Red State Blue For 10 years, we carried around charts of Georgia’s demographic and registration projections, as well as one that showed shrinking margins of victory for Republicans in races for the Senate, the governorship and the presidency over time. That way, we could demonstrate that we were gaining momentum with each election cycle and that while demography was not destiny, it was an opportunity we were actually seizing. Historically, the Democratic Party has failed to cultivate Black, Latino, Asian-American and Native American staff members to work in campaign roles outside of the area of field operations, where they were often expected to talk only to their own ethnic identity groups or people of color in general. To win in the 21st century, Democrats must cultivate and hire people of color in the central areas of communications, fund-raising, research, operations and management.

'Nomadland': Chloé Zhao and crew reveal how they made one of the year's best films - CNN Style Having been wrenched from the earth, the mineral gypsum is crushed first. It's then blasted at high temperatures and ground down, packed up and shipped out to find a new purpose. What's left behind is a void; an empty space where something once thought permanent used to be. Such was the fate of Empire, a mining town near the Black Rock Desert, Nevada. When the gypsum mine closed in 2011 under the weight of the recession, it extinguished the community and scattered its people. America Wasn’t a Democracy, Until Black Americans Made It One My dad always flew an American flag in our front yard. The blue paint on our two-story house was perennially chipping; the fence, or the rail by the stairs, or the front door, existed in a perpetual state of disrepair, but that flag always flew pristine. Our corner lot, which had been redlined by the federal government, was along the river that divided the black side from the white side of our Iowa town. At the edge of our lawn, high on an aluminum pole, soared the flag, which my dad would replace as soon as it showed the slightest tatter. My dad was born into a family of sharecroppers on a white plantation in Greenwood, Miss., where black people bent over cotton from can’t-see-in-the-morning to can’t-see-at-night, just as their enslaved ancestors had done not long before.