How young children learn English as another language 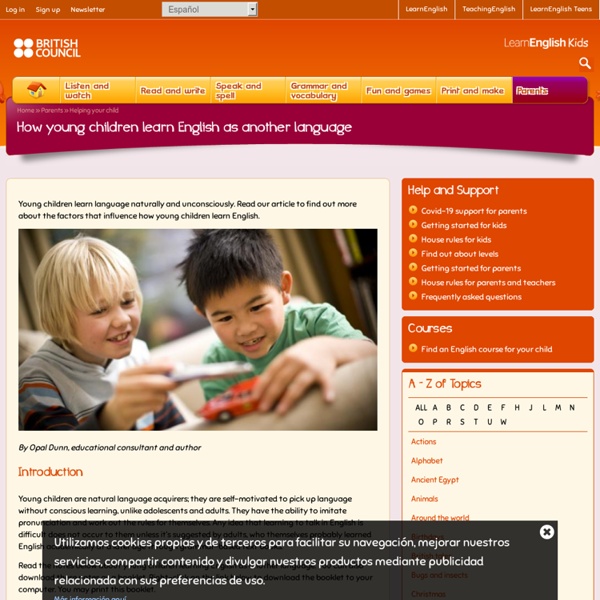 By Opal Dunn, educational consultant and author Introduction Young children are natural language acquirers; they are self-motivated to pick up language without conscious learning, unlike adolescents and adults. They have the ability to imitate pronunciation and work out the rules for themselves. Any idea that learning to talk in English is difficult does not occur to them unless it’s suggested by adults, who themselves probably learned English academically at a later age through grammar-based text books. Read the notes below about young children learning English as another language. The advantages of beginning early Young children are still using their individual, innate language-learning strategies to acquire their home language and soon find they can also use these strategies to pick up English. Stages in picking up English Spoken language comes naturally before reading and writing. Understanding Frustration Mistakes Gender differences Language-learning environments Reading Parental support

What Parents Can Gain From Learning the Science of Talking to Kids The widening education gap between the rich and the poor is not news to those who work in education, many of whom have been struggling to close the gap beginning the day poor children enter kindergarten or preschool. But one unlikely soldier has joined the fight: a pediatric surgeon who wants to get started way before kindergarten. She wants to start closing the gap the day babies are born. Enhancing the Language Development of Young Children When we first brought our daughter home from the hospital I was inexperienced. Mother came to help and in her always wise and gentle way said, "Honey, you need to talk to that baby." What wonderful advice!

Getting the right balance between adult-led and child-initiated learning As an early years practitioner you will know the importance of creating the right balance between adult-led and child-initiated learning. Help all children learn and develop with this guide. Adult-led activities are based on our own professional understanding of what we should teach young children and what experiences they should have. Through adult-led activities we can introduce children to new ideas, provide opportunities for them to develop their skills and ensure that they experience all areas of learning in the Early Years Foundation Stage (EYFS). During adult-led learning we can feel that we are in control of the teaching we are providing. However, what we cannot have any control over is what young children are learning from these experiences.

How young children learn English through play As we release Learning Time with Timmy – our first app for early-years learners of English – Danitza Villarroel, a teacher on our Learning Time with Shaun and Timmy course in Chile, explains the importance of learning through play, and offers a few tips for teachers new to this age group. Teaching English to pre-school children can be daunting for teachers new to this age group. Young children have shorter attention spans than older children and adults, and they're still learning their mother tongue. But teaching these learners can be enormously rewarding once you've taken a few basic principles on board. Why Movement is Essential in Early Childhood With so few years under their belts, my 3- and 6-year-old daughters are still learning to inhabit their bodies. They are learning how to maneuver themselves physically, how to orient themselves in space. As Vanessa Durand, a pediatrician at St. Christopher’s Hospital for Children in Philadelphia, says, freedom of movement is necessary for children to meet their developmental milestones: “Children learn by experiencing their world using all of their senses. The restriction of movement, especially at a young age, impedes the experiential learning process.”

Does being bilingual make you smarter? Language teacher and researcher Miguel Angel Muñoz explains the latest research on how being bilingual affects your brain, ahead of a British Council seminar in Cardiff on whether learning a foreign language makes you smarter. You can watch the live-streamed seminar on Tuesday, 3 June. More than half the world's population uses two or more languages every day It is hard to estimate the exact number of bilingual people in the world, as there is a lack of reliable statistics . But in 2012, a Eurobarometer survey established that 'just over half of Europeans (54%)' are bilingual, and other studies hypothesise that more than half of the world’s population is bilingual. So what about you?

How can young children best learn languages? The British Council's Tracey Chapelton explains how parents of young children can lay the foundations for success. Children's brains are highly active Your child is unique, but what all children have in common is natural curiosity and an innate ability to learn. Kuhl states that babies and young children are geniuses at acquiring a second language. 'Babies', she says, 'can discriminate all the sounds of all languages... and that's remarkable because you and I can't do that. We're culture-bound listeners.

Importance of play for babies & children Australian Government Department of Education and Training (2009). Belonging, being and becoming: The early years learning framework for Australia. Canberra: Commonwealth of Australia. Retrieved 19 June 2019 from Cole-Hamilton, I. (2011). Importance of play for babies & children Play is more than just fun for babies and children. It’s how they learn best, and how they work out who they are, how the world works and where they fit into it. You can read this article in a selection of languages other than English. The importance of play Playing is one of the most important things you can do with your child, because play is essential for your child’s brain development.

Primary school shake-up to focus on ‘play-led’ learning Children at primary schools would not study traditional subjects until as late as 10 years of age, under proposals being considered by policymakers. Instead, there would be a much greater emphasis on creative play during the early years of primary school, and broader areas of learning in later years. The reforms are based loosely on some of the features of top-performing education systems in countries such as Finland, as well as new research on how children learn. The proposals, drafted by the National Council for Curriculum and Assessment (NCCA), represent some of the biggest proposed changes to teaching and learning at primary level in more than two decades. They also seek to give teachers more flexibility and autonomy over the amount of time dedicated to key areas of learning.

A few more myths about speakers of multiple languages Does multilingualism cause language delays and identity problems? The British Council's Nayr Ibrahim busts a few more myths about speakers of multiple languages. Myth: Multilingualism causes language delay Raising children bilingually is sometimes believed to cause language delay. Listen to Your Mother Young children face a remarkable challenge in learning to use the language of their culture. Toddlers vary widely, however, in the rate at which they learn new words.1 A team of Harvard Graduate School of Education researchers set out to ask whether and how children's language environment can impact vocabulary development. In their study of mother-child pairs from low-income families, they found that mothers who used many different words (not just many words) had toddlers with faster growth in vocabulary use.