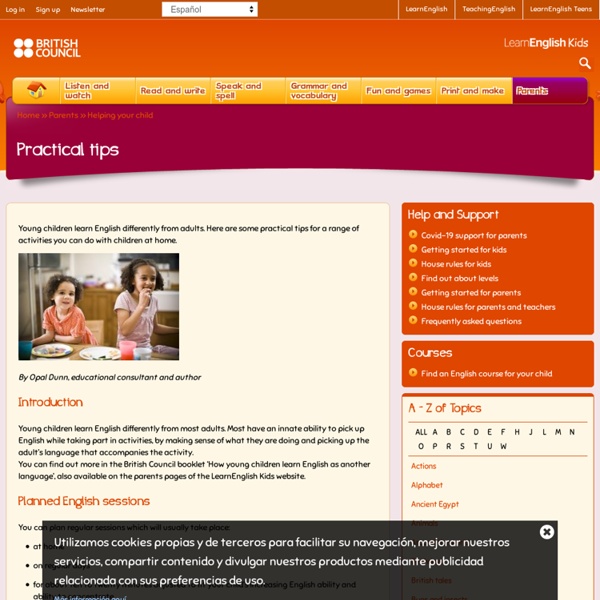 By Opal Dunn, educational consultant and author Introduction Young children learn English differently from most adults. Most have an innate ability to pick up English while taking part in activities, by making sense of what they are doing and picking up the adult’s language that accompanies the activity. You can find out more in the British Council booklet ‘How young children learn English as another language’, also available on the parents pages of the LearnEnglish Kids website. Planned English sessions You can plan regular sessions which will usually take place: at home on regular days for about ten to twenty minutes adjusted to fit your child’s increasing English ability and ability to concentrate as a planned programme that reviews and builds on known activities and introduces new ones. Short English sessions These are more informal and can take place: any place – in the car, at bathtime, in a supermarket queue any time in response to a mood or special experience. Basic programme Crafts

11 Drawings to Remember English Rules Forever Have you ever had a problem that you just couldn’t solve for ages? Then suddenly someone says one word, or just shows you one simple picture, and you get that “aha” moment — you suddenly understand everything? Well, over the many, many years I’ve been teaching English, I’ve found that some simple images can help explain rules in English that cause so many problems for people. Hopefully, they’ll help you, too. Getting the right balance between adult-led and child-initiated learning As an early years practitioner you will know the importance of creating the right balance between adult-led and child-initiated learning. Help all children learn and develop with this guide. Adult-led activities are based on our own professional understanding of what we should teach young children and what experiences they should have.

Whole Child Development Is Undervalued The question is how to make such an approach both systemic and sustainable. Whole Person Socio-emotional, physical, creative, and cognitive capacities are deeply intertwined and equally important in ensuring a child's wellbeing, learning, and growth. (That shouldn't be a surprise to anyone studying or supporting children's learning.) Nobel laureate James Heckman, a professor of economics at the University of Chicago, has shown that the non-cognitive skills emerging in early childhood are among the strongest predictors of adult outcomes. Video Lesson: Mr. Bean – Tim's Free English Lesson Plans Follow me on twitter Just a quick note… Before you use these materials… We’ve created a new podcast aimed at B2+ level English students and teachers alike. You can listen for free at our SoundCloud page below. We have released 5 episodes so far and you can download teacher’s notes to accompany them from our Facebook page or from this blog. All comments and feedback welcome!

Importance of play for babies & children Australian Government Department of Education and Training (2009). Belonging, being and becoming: The early years learning framework for Australia. Canberra: Commonwealth of Australia. Retrieved 19 June 2019 from Cole-Hamilton, I. (2011). Getting it right for play: The power of play: An evidence base. How can parents and teachers best educate young children? What principles can both teachers and parents bring to the education of very young children? Gillian Craig, who was part of the Learning Time with Shaun and Timmy writing team, explains. As teachers and parents, we follow certain principles in our roles. Often though, these principles overlap and all we need to do is recognise and reinforce these areas. Ask (the right) questions When my daughter came out of her class one day shortly after her course started, I asked her, 'What did you do in class today?'.

How Are Happiness and Learning Connected? As teachers, we also know that when students' affective filters or defenses are sky high, fight or flight responses will be modus operandi. A room full of defensive behaviors (withdrawn, angry) is a sad, unproductive place to teach and learn. Now let's flip it and take a look at how much more we are able to learn when we are in harmony with the people and things in any given educational environment.

Your missions. Extract from"A Message to the Grassroots" speech (November 10,1963) Detroit, Michigan by Malcolm X. You don’t have a peaceful revolution. You don’t have a turn-the-other-cheek revolution. There’s no such thing as a nonviolent revolution. Primary school shake-up to focus on ‘play-led’ learning Children at primary schools would not study traditional subjects until as late as 10 years of age, under proposals being considered by policymakers. Instead, there would be a much greater emphasis on creative play during the early years of primary school, and broader areas of learning in later years. The reforms are based loosely on some of the features of top-performing education systems in countries such as Finland, as well as new research on how children learn. The proposals, drafted by the National Council for Curriculum and Assessment (NCCA), represent some of the biggest proposed changes to teaching and learning at primary level in more than two decades. They also seek to give teachers more flexibility and autonomy over the amount of time dedicated to key areas of learning. Educators, policymakers and parents discussed the proposals at a conference in Dublin Castle on Tuesday as part of a consultation phase which continues until the end of April.