How the Virus Got Out 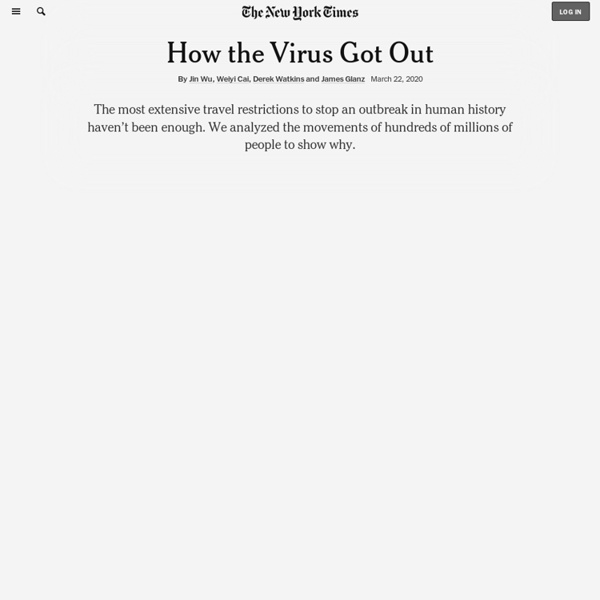 'Wet markets' launched the coronavirus. Here's what you need to know. Until earlier this year, most people had never heard of the term “wet market,” but the coronavirus pandemic has thrust it into the limelight. A wet market in Wuhan, China, called the Huanan Seafood Wholesale Market, is believed to be the source of COVID-19. Somewhat akin to farmer’s markets and found around the world, wet markets are typically large collections of open-air stalls selling fresh seafood, meat, fruits, and vegetables.

The Virus Changed the Way We Internet Stuck at home during the coronavirus pandemic, with movie theaters closed and no restaurants to dine in, Americans have been spending more of their lives online. But a New York Times analysis of internet usage in the United States from SimilarWeb and Apptopia, two online data providers, reveals that our behaviors shifted, sometimes starkly, as the virus spread and pushed us to our devices for work, play and connecting. We are looking to connect and entertain ourselves, but are turning away from our phones Feb. 29 First U.S.

2019 coronavirus: The Korean clusters It’s not clear where Patient 31 became infected with the virus, but in the days before her diagnosis, she travelled to crowded spots in Daegu, as well as in the capital Seoul. On February 6 she was in a minor traffic accident in Daegu, and checked herself into an Oriental medicine hospital. While at that hospital, she attended services at the Daegu branch of the Shincheonji Church of Jesus, on February 9 and again on February 16. In between those visits, on February 15, doctors at the hospital said they first suggested she be tested for the coronavirus, as she had a high fever. Instead, the woman went to a buffet lunch with a friend at a hotel.

Covid-19 (Coronavirus) Update: Chronology of a Pandemic About a months since our last update, the world according to Covid-19 cases looks very different. The absolute number of accumulated cases has almost doubled to now more than 6.4 million and more than 382,000 have died (all figures last updated 04 June 2020). The trend that we identified at the beginning of May, with the USA as a constant epicentre, growing faster than any other country and South America (namely Brazil and Peru) and Russia closing in and Europe stagnating, hast been manifested. Brazil has recently overtaken the United States in the number of daily cases.

Italy, Pandemic’s New Epicenter, Has Lessons for the World “We have been the first ones with the most rigorous and accurate controls,” he said on television, adding that more people in Italy appeared infected because “we did more tests.” The next day, as infections surpassed 200, seven people died and the stock market plunged, Mr. Conte and his health aides doubled down. He blamed the Codogno hospital for the spread, saying it had handled things in “a not-completely-proper way” and argued that Lombardy and Veneto, another northern region, were inflating the severity of the problem by diverging from global guidelines and testing people without symptoms. As Lombardy officials scrambled to free up hospital beds, and the number of infected people rose to 309 with 11 dead, Mr. Conte said on Feb. 25 that “Italy is a safe country and probably safer than many others.”

‘We’re Hardly Heroic’ Dr. Li, a heart specialist at Wuhan No. 4 Hospital, spent the third week of March preparing for the reopening of the hospital’s general clinics, which closed on January 22, when No. 4 became a key facility for treating COVID-19 patients. After working for two months on the front lines of the coronavirus outbreak, Li is mentally and psychologically at a loss about what to do next.

He Could Have Seen What Was Coming: Behind Trump’s Failure on the Virus The shortcomings of Mr. Trump’s performance have played out with remarkable transparency as part of his daily effort to dominate television screens and the national conversation. But dozens of interviews with current and former officials and a review of emails and other records revealed many previously unreported details and a fuller picture of the roots and extent of his halting response as the deadly virus spread: The National Security Council office responsible for tracking pandemics received intelligence reports in early January predicting the spread of the virus to the United States, and within weeks was raising options like keeping Americans home from work and shutting down cities the size of Chicago. Mr.

Respiratory virus shedding in exhaled breath and efficacy of face masks Study design Participants were recruited year-round from March 2013 through May 2016 in a general outpatient clinic of a private hospital in Hong Kong. As routine practice, clinic staff screened all individuals attending the clinics for respiratory and any other symptoms regardless of the purpose of the visit at triage. Study staff then approached immediately those who reported at least one of the following symptoms of ARI for further screening: fever ≥37.8 °C, cough, sore throat, runny nose, headache, myalgia and phlegm. Coronavirus 2019-nCoV Lancet Inf Dis Article: Here. Mobile Version: Here. Data sources: Full list. Downloadable database: GitHub, Feature Layer. Lead by JHU CSSE. Technical Support: Esri Living Atlas team and JHU APL.

Coping with Fatigue, Fear, and Panic During a Crisis Executive Summary Fatigue, fear, and panic undermine our ability to think clearly and creatively, manage our relationships effectively, focus attention on the right priorities, and make smart, informed choices. So when faced with a serious crisis, how can we take better care of ourselves and build more resilience? One way is to become more aware of the three selves that influence our behavior in the face of threat and danger. Chinese Agents Spread Messages That Sowed Virus Panic in U.S., Officials Say Spread the word, the messages said: The Trump administration was about to lock down the entire country. “They will announce this as soon as they have troops in place to help prevent looters and rioters,” warned one of the messages, which cited a source in the Department of Homeland Security. “He said he got the call last night and was told to pack and be prepared for the call today with his dispatch orders.” Since that wave of panic, United States intelligence agencies have assessed that Chinese operatives helped push the messages across platforms, according to six American officials, who spoke on the condition of anonymity to publicly discuss intelligence matters. The amplification techniques are alarming to officials because the disinformation showed up as texts on many Americans’ cellphones, a tactic that several of the officials said they had not seen before. The origin of the messages remains murky.