The History of Pandemics, by Death Toll 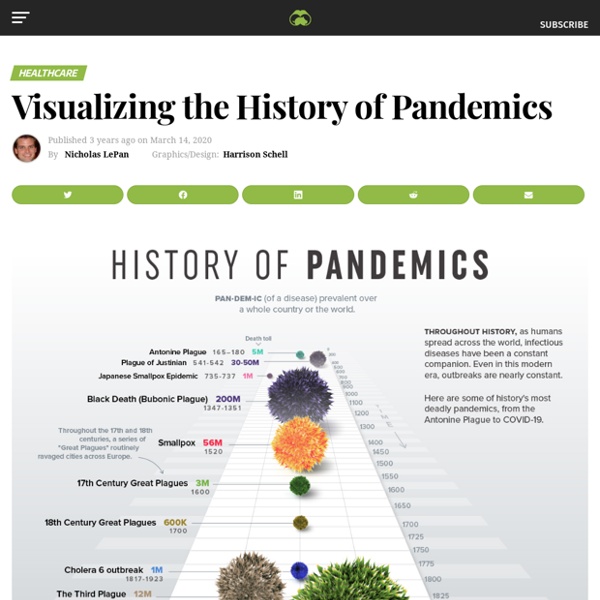 Pan·dem·ic /panˈdemik/ (of a disease) prevalent over a whole country or the world. As humans have spread across the world, so have infectious diseases. Even in this modern era, outbreaks are nearly constant, though not every outbreak reaches pandemic level as COVID-19 has. Today’s visualization outlines some of history’s most deadly pandemics, from the Antonine Plague to the current COVID-19 event. A Timeline of Historical Pandemics Disease and illnesses have plagued humanity since the earliest days, our mortal flaw. Widespread trade created new opportunities for human and animal interactions that sped up such epidemics. The more civilized humans became – with larger cities, more exotic trade routes, and increased contact with different populations of people, animals, and ecosystems – the more likely pandemics would occur. Here are some of the major pandemics that have occurred over time: Note: Many of the death toll numbers listed above are best estimates based on available research.

Air pollution in Victorian-era Britain – its effects on health now revealed The health hazards of atmospheric pollution have become a major concern in Britain and around the world. Much less is known about its effects in the past. But economic historians have come up with new ways of shedding light on this murky subject. In the early industrial age, Britain was famous for its dark satanic mills. And the industrial revolution, which did so much to raise income and wealth, depended almost entirely on one fuel source: coal. Coal supplied domestic hearths and coal-powered steam engines turned the wheels of industry and transport.

20 of the worst epidemics and pandemics in history Throughout the course of history, disease outbreaks have ravaged humanity, sometimes changing the course of history and, at times, signaling the end of entire civilizations. Here are 20 of the worst epidemics and pandemics, dating from prehistoric to modern times. 1. Prehistoric epidemic: Circa 3000 B.C. Epidemics Epidemics are infectious (easily spread) diseases that spread quickly in a large area, or country. They can cause widespread sickness and even death. When an epidemic gets out of control and spreads to many countries or regions of the world, it is called a pandemic.

COVID-19 – Přehledy pohybu komunity Each Community Mobility Report is broken down by location and displays the change in visits to places like grocery stores and parks. Learn more about the data. We’re working to add more countries, regions and languages in the coming weeks. This is an early release and reports will be updated regularly. The Community Mobility Reports were developed to be helpful while adhering to our stringent privacy protocols and protecting people’s privacy. No personally identifiable information, such as an individual’s location, contacts or movement, will be made available at any point.

Aerosol transmission of Covid-19: A room, a bar and a classroom: how the coro... The coronavirus is spread through the air, especially in indoor spaces. While it is not as infectious as measles, scientists now openly acknowledge the role played by the transmission of aerosols – tiny contagious particles exhaled by an infected person that remain suspended in the air of an indoor environment. How does the transmission work?

From smoke stacks to solar: Port Augusta 20 December 2017 Port Augusta had long been South Australia’s coal-fired powerhouse. But a five-year-long community campaign has delivered solar success and an end to the smokestacks, reports Dan Spencer ‘Now, there will be something for the children,’ thought Ursula Meese, an elderly and committed member of Repower Port Augusta, as she danced around her living room. She had just heard the news that the world’s biggest solar thermal tower with storage had been given the green light, thanks to the Repower campaign.

Coronavirus Update (Live): 7,582,164 Cases and 423,067 Deaths from COVID-19 Virus Pandemic - Worldometer How dangerous is the virus? There are three parameters to understand in order to assess the magnitude of the risk posed by this novel coronavirus: Transmission Rate (Ro) - number of newly infected people from a single caseCase Fatality Rate (CFR) - percent of cases that result in death Determine whether asymptomatic transmission is possible

To sign in: Email: library.ncg@ncg.school.nz Password: Versace1 Subscribe to National Geographic How devastating pandemics change us A reflection on what we've failed to learn from past pandemics His discovery about the dangers of filth saved countless lives Centuries after spreading smallpox, the Spanish led a global campaign to fight it Coronavirus chart: see how your country compares Cases or deaths Comparing the spread of coronavirus in different countries is difficult using the data being released by governments. Confirmed case counts depend heavily on the extent of countries’ very different testing regimes, so higher totals may simply reflect more testing. Deaths are somewhat more reliable, but remain problematic because countries have different rules for what deaths to include in their official numbers.

Black death skeletons reveal pitiful life of 14th-century Londoners The 25 skeletons unearthed in the Clerkenwell area of London a year ago may hold the key to the truth about the nature of the Black Death that ravaged Britain and Europe in the mid-14th century. A Channel 4 documentary on Sunday will claim that analysis of the bodies and of wills registered in London at the time has cast doubt on "facts" that every schoolchild has learned for decades: that the epidemic was caused by a highly contagious strain spread by the fleas on rats. Evidence taken from the human remains found in Charterhouse Square, to the north of the City of London, during excavations carried out as part of the construction of the Crossrail train line, may support a theory held by some scientists that only an airborne infection could have spread so fast and killed so quickly. The Black Death arrived in Britain from central Asia in the autumn of 1348 and by late spring the following year it had killed six out of every 10 people in London. … we have a small favour to ask.

What the 1918 flu pandemic can teach us about coronavirus drug trials Sometimes the parallels between this pandemic and previous ones are uncanny. Take hydroxychloroquine, the anti-malarial drug that regulatory agencies all over the world are now hastily authorising for the treatment of hospitalised Covid-19 patients. Outside hospitals, Donald Trump and the Brazilian president, Jair Bolsonaro, have expressed enthusiasm for the drug, people are breaking social distancing rules to get it, and there have been cases of poisoning due to inappropriate self-medication. The run on hydroxychloroquine is the result of a small trial being conducted at a hospital in Marseille that, though promising, has not yet provided the required standard of proof that the medicine works for Covid-19 – let alone information about when it works, or in what doses.