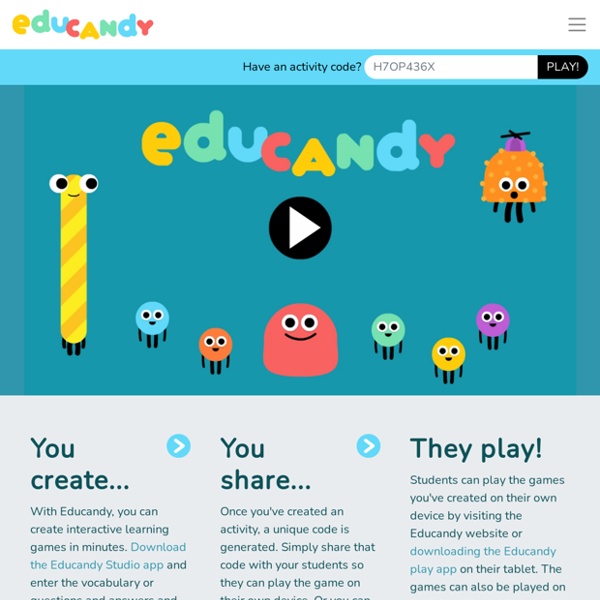 The Ultimate Guide - Googoo English It’s hot and sticky. The kids are tired. It’s nearly the end of the year. So what better than a summer class outside, in the cool shade, playing fun games and learning English. ‎Lingokids - English For Kids on the App Store Lingokids, English for Kids, is an interactive learning experience that will introduce your child to English and take them on an exciting, fun-filled adventure! We are an early learning app for children ages 2-8 that focuses on language skills such as English pronunciation, vocabulary, ABC (English alphabet), writing, and more. Lingokids has no ads and is 100% kids safe, meaning you can let your child(ren) play by themselves. Don’t worry, they’re not alone on this learning adventure! They’ll have Lisa the Cat, Billy the Chick, and other furry friends by their side the entire time. Millions of families and teachers across the globe use Lingokids as a fun learning tool.

Nicole Lazzaro's Blog Emotion and the Fun of Games As experts in player experiences we see a huge gap between “market research” and what players most enjoy about play. Players may check “good graphics” on a online survey, but our cross-genre contextual research reveals a more interesting story. We know how games deliver more emotions than frustration, excitement, and fear. The secret is in the gameplay. Random Student Generator The Transum name selecting application helps teachers choose students in a completely random way. Click on the select button to find one of the student names in the class list. Edit the class list using the text boxes to the right of this page. Saving Names

Telling the Time You can set this page as a homework task for a group of students; doing so will give you a record of who has completed the task. Visit the teacher's section for more information. You can share this page by using the link below. This is a mini-game to learn and practice telling the time in English. Students can interact with a clock to change the time and there is also a mini-game which involves matching a time phrase to a clock.

SCVNGR's Secret Game Mechanics Playdeck Some companies keep a playbook of product tips, tricks and trade secrets. Zynga has an internal playbook, for instance, that is a collection of “concepts, techniques, know-how and best practices for developing successful and distinctive social games”. Zynga’s playbook has entered the realm of legend and was even the subject of a lawsuit. SCVNGR, which makes a mobile game with real-world challenges, has a playdeck. Grouping Tools for the Classroom Creating groups for differentiation can be hard or easy, depending on how many students you are working with and how often you want to shuffle your groups. In each group, you may want to allow students to self-select a role with accompanying responsibilities or randomly assign the role. This isn’t a difficult task. Another task that can be more onerous is randomly splitting up your class roster into equal-sized groups. While I usually do this based on seating arrangement (usually, teams of four students per desk group), you can also do it using online programs. Before we explore those, let’s revisit roles and responsibilities students may have.

The adventure before your exam by katarzynajanocha on Genially MISSION,CHARACTERS,The adventurebefore your exam...,START,,INTRODUCTION,The adventurebefore your exam...,,CHARACTERS,Are you ready for an unforgettable trip? Pack your backpack and start a fascinating journey! How to Get Your Mind to Read In one experiment, third graders — some identified by a reading test as good readers, some as poor — were asked to read a passage about soccer. The poor readers who knew a lot about soccer were three times as likely to make accurate inferences about the passage as the good readers who didn’t know much about the game. That implies that students who score well on reading tests are those with broad knowledge; they usually know at least a little about the topics of the passages on the test. One experiment tested 11th graders’ general knowledge with questions from science (“pneumonia affects which part of the body?”), history (“which American president resigned because of the Watergate scandal?”), as well as the arts, civics, geography, athletics and literature.

It needs an account subscription but it’s very easy to start with and create spontaneous games and quizzes using the vocabulary seen in class. by missbenglishclass Jul 31

Educandy is a game builder that I reviewed last fall. Since then a couple of more game templates have been added. One of those is a matching or memory game template. To use the template you simply provide a list of words or terms and Educandy does the rest. Your game will be assigned its own URL that you can distribute to your students by missbenglishclass Jul 31