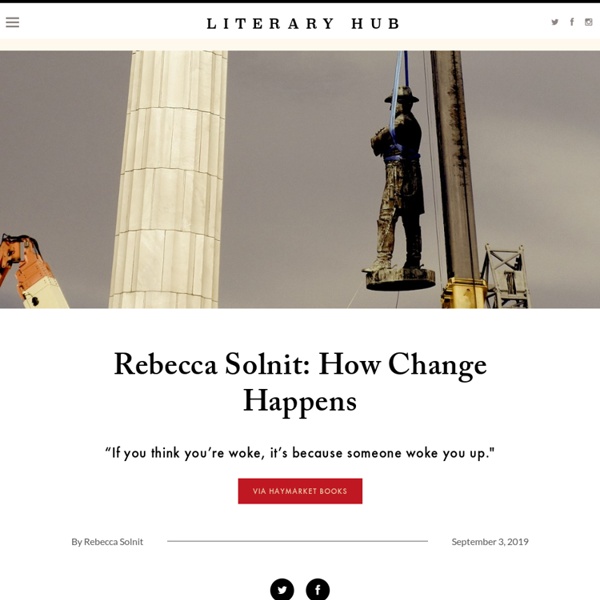 We are building something immense together that, though invisible and immaterial, is a structure, one we reside within—or, rather, many overlapping structures. They’re assembled from ideas, visions and values emerging out of conversations, essays, editorials, arguments, slogans, social-media messages, books, protests, and demonstrations. About race, class, gender, sexuality; about nature, power, climate, the interconnectedness of all things; about compassion, generosity, collectivity, communion; about justice, equality, possibility. Though there are individual voices and people who got there first, these are collective projects that matter not when one person says something but when a million integrate it into how they see and act in the world. The we who inhabits those structures grows as what was once subversive or transgressive settles in as normal, as people outside the walls wake up one day inside them and forget they were ever anywhere else. We live inside ideas.

The Third Self: Mary Oliver on Time, Concentration, the Artist's Task, and the Central Commitment of the Creative Life “In the wholeheartedness of concentration,” the poet Jane Hirshfield wrote in her beautiful inquiry into the effortless effort of creativity, “world and self begin to cohere. With that state comes an enlarging: of what may be known, what may be felt, what may be done.” But concentration is indeed a difficult art, art’s art, and its difficulty lies in the constant conciliation of the dissonance between self and world — a difficulty hardly singular to the particular conditions of our time. Two hundred years before social media, the great French artist Eugène Delacroix lamented the necessary torment of avoiding social distractions in creative work; a century and a half later, Agnes Martin admonished aspiring artists to exercise discernment in the interruptions they allow, or else corrupt the mental, emotional, and spiritual privacy where inspiration arises. Oliver writes: It is a silver morning like any other.

A “New Normal” for Leadership?: Where We Go From Here We are all on edge. Covid-19, its variants, slow vaccinations, and the surge of infections, hospitalizations, and deaths have all brought us to the edge. We are also on edge because of the deep political, racial, economic, and cultural divisions which are amplified by the pandemic. It feels overwhelming. We are living from day to day or week to week, feeling largely out of control.

Short Stories Online Homepage > Resources > Web Sites > Short Stories Online These Philip K. Dick stories come from Project Gutenberg and are stories that were written early in his career. Pocket - Poor teeth click 2x I am bone of the bone of them that live in trailer homes. I grew up next to Tiffany ‘Pennsatucky’ Doggett, the hostile former drug addict from the prison TV drama Orange Is the New Black. I know her by her teeth. Pennsatucky – a scrappy slip of a woman menacing, beating and proselytising to fellow inmates – stole the show during the first season of the Netflix prison series. But amid an ensemble cast of similarly riveting, dangerous characters, it was her grey, jagged teeth that shocked viewers into repulsed fixation. 7 Books That Look at Nature Up Close There is an area of Central Park called Cherry Hill, located just above the Lake and east of Strawberry Fields, that is covered in a ring of its namesake trees. Ignored most of the year in favor of bigger, flatter picnicking spots like Sheep’s Meadow or the Great Lawn, Cherry Hill is overrun with visitors for a few weeks each spring. On a recent walk, I saw an engagement shoot, a couple taking wedding portraits, and a dozen tourists crowded under the pink boughs, all angling for a photograph that didn’t include someone else’s head. But soon the trees shed their petals for leaves, and now people indifferently pass by the slope, looking for the next Instagrammable shot. The drawbacks of treating life like a highlight reel are becoming increasingly obvious, and not just to the people who have tried to do yoga in the Central Park rowboats.

Can Religion Guide the Ethics of A.I.? “Alexa, are we humans special among other living things?” One sunny day last June, I sat before my computer screen and posed this question to an Amazon device 800 miles away, in the Seattle home of an artificial intelligence researcher named Shanen Boettcher. At first, Alexa spit out a default, avoidant answer: “Sorry, I’m not sure.” But after some cajoling from Mr. The Lost Words: An Illustrated Dictionary of Poetic Spells Reclaiming the Language of Nature “Words belong to each other,” Virginia Woolf’s melodious voice unspools in the only surviving recording of her speech — a 1937 love letter to language. “In each word, all words,” the French philosopher Maurice Blanchot writes a generation later as he considers the dual power of language to conceal and to reveal. But because language is our primary sieve of perception, our mightiest means of describing what we apprehend and thus comprehending it, words also belong to that which they describe — or, rather, they are the conduit of belonging between us and the world we perceive.

Shifting the Three Fundamental Elements of Culture Will Create a New Environment Nothing stops the change process in its tracks like hearing: “Our culture won’t allow us to do that.” Though the words are simple — often uttered reflexively with little thought — they can serve as a daunting wall standing in the path of positive change. How Is Culture Built? Culture is made up of the behavior patterns of people who live within it. The patterns are the result of an understanding by each individual of their role (or roles) within an organization.

Woman Gets Shamed For Breastfeeding Son In Public, Thousands Of People Stand Up For Her It is not uncommon for a natural activity to be turned into a social taboo. In many ways, the female body is particularly laden with rules and regulations attempting to control our life experiences. Often we must oblige, or we are viewed as “divergent,” “rebellious,” or even “disobedient.” Well, one woman had just about enough of the breastfeeding shaming from both a specific woman, and society, so she decided to do something about it. Ashley Kaidel was enjoying a meal at a restaurant when her baby starting showing signs of hunger.