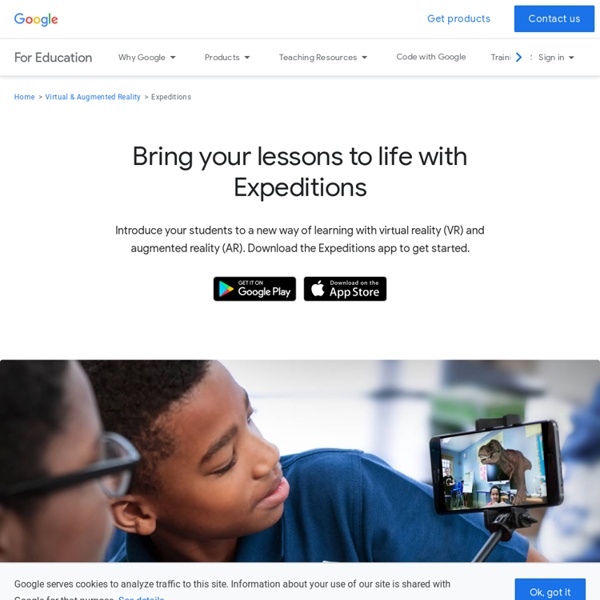 Darned Sock Productions Winner: Best App for Children “A brilliant combination of experiential digital design and traditional storytelling.”2015 Digital Book Awards Discover the mystery of the barbershop. Roland Bartholomew Dexter the Third’s whole life has been about routine and rules. Every day he wakes up, studies the books in his family’s library, sweeps the floor of his family’s barber shop, and goes to sleep. The barber shop has only one customer–a creepy old relative named Mr.

Education Applications in Reality Technology (MR, AR, VR) The education industry has historically been a little slow to embrace new technologies. Although the Educational Technology (EdTech) space is quite large, finding traction in cash-strapped public schools especially as been difficult. Sometimes, though, a technology comes along that is so clearly a watershed moment that the whole world stands up and takes notice. Virtual reality is one such technology, and it’s making inroads into every aspect of education. The dream of virtual reality is dying Hilmar Veigar Pétursson, CEO of the studio CCP Games (responsible for the massive Eve: Online), says the company doesn't see much of a future for virtual reality gaming. “We expected VR to be two to three times as big as it was, period,” Pétursson told gaming site Destructoid just a few days ago, adding, “You can't build a business on that.” There's a chance the company could jump back in, but their own data showed adoption was slow, even among enthusiasts.

7 Best Educational Virtual Reality Apps By Shane Haumpton Virtual reality (VR) has so much potential as a tool that can take learning beyond the conventional classroom. With touted benefits such as enhanced engagement, improved retention, and the ability to block out common classroom distractions, this simulation-based technology is being predicted as one of the top emerging learning trends in 2017. But despite the clear advantages, we have yet to see the widespread use of virtual reality in schools. According to the findings of a survey conducted by Extreme Networks in June 2016, 77% of 350 higher education and K-12 schools had not used VR in the classroom, and the top reasons for not utilizing the technology, according to 43% of the respondents, were the high cost of equipment and the difficulty in implementation.

Timeline Home › Classroom Resources › Mobile Apps Mobile App Create a graphical representation of an event or process by displaying items sequentially along a line. Timelines can be organized by time of day, date, or event, and the tool allows users to create a label with short or long descriptive text. Augmented Reality Glasses: What You Can Buy Now (or Soon) There has been a steady buzz about the virtues of virtual reality, but augmented reality is on the cusp of truly breaking out. Most people have been introduced to the technology via popular smartphone games like Pokemon Go or Snapchat's suite of filters. And with Apple and Google launching their own smartphone-driven AR platforms, ARKit and ARCore, the AR wave shows no signs of dissipating.

Mixed Reality Brings New Life to K–12 Classrooms Among the emerging technologies hitting the K–12 sphere, virtual, augmented and mixed reality tools have garnered a lot of interest. Mixed reality has remarkable potential for the K–12 classroom. Here is a tool that lets students explore the molten core of our planet or get deep in the anatomy of a frog without ever picking up a scalpel — all with the click of a button.