Elon Musk to show off working brain-hacking device. Image copyrightGetty Images Elon Musk is due to demonstrate a working brain-to-machine interface as part of his ambitious plans to give people superhuman powers. 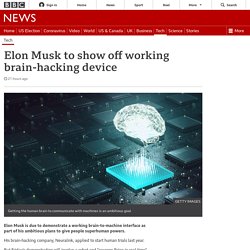 His brain-hacking company, Neuralink, applied to start human trials last year. But Friday's demonstration will involve a robot and "neurons firing in real time", a series of tweets reveals. The interface could allow people with neurological conditions to control phones or computers with their mind. But the long-term ambition is to usher in an age of what Mr Musk calls "superhuman cognition". People need to merge with artificial intelligence, he says, in part to avoid a scenario where AI becomes so powerful it destroys the human race.

Founded in 2017, Neuralink has worked hard to recruit scientists, something Mr Musk was still advertising for on Twitter last month. C Harris. Why? 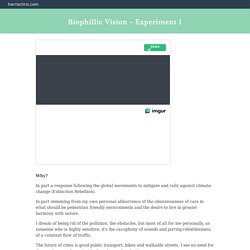 In part a response following the global movements to mitigate and rally against climate-change (Extinction Rebellion). In part stemming from my own personal abhorrence of the obnoxiousness of cars in what should be pedestrian friendly environments and the desire to live in greater harmony with nature. I dream of being rid of the pollution, the obstacles, but most of all for me personally, as someone who is highly sensitive, it's the cacophony of sounds and jarring relentlessness of a constant flow of traffic. The future of cities is good public transport, bikes and walkable streets. I see no need for the regular use of cars inside densely populated cities. 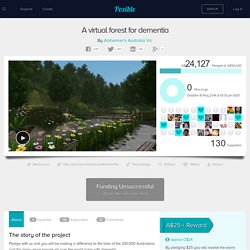 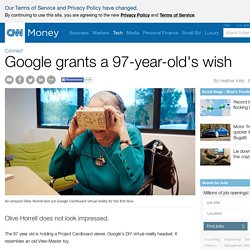 It resembles an old View-Master toy. "This is old fashioned stuff! Way before your time," she says. She puts on headphones, holds the viewer up to her eyes, and her jaw immediately drops. Citizen scientists use their eyes, ears and smartphones to protect birds, frogs and other wildlife. Tour Builder. Anishinaabe artist's new VR experience takes an Indigenous futurist look at Toronto.

A Canadian artist's new virtual reality experience rooted in Indigenous futurism will premiere at the Tribeca Film Festival in New York next week. 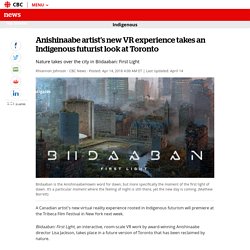 Biidaaban: First Light, an interactive, room-scale VR work by award-winning Anishinaabe director Lisa Jackson, takes place in a future version of Toronto that has been reclaimed by nature. ImagineNATIVE VR imagines Indigenous lives in 150 years. Instead of looking at the past 150 years, annual Indigenous film festival ImagineNATIVE has introduced a virtual reality media series looking into the future. 2167 features four VR experiences all created by different teams, each with its own interpretation of how life might look for Indigenous people 150 years into the future. 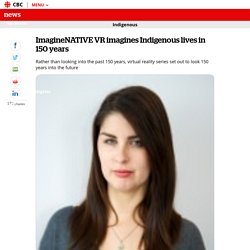 Each of the experiences runs between five and six minutes, and can be enjoyed using a VR headset and headphones. York University student Katelyn Bartlett experiences virtual reality for the first time. Adopting Virtual Reality for Education - Medium. “As an educator with 20+ years’ experience integrating technology into curriculum, it is exciting for me to see a technology that so quickly captures the attention of the students, motivates them to make the effort to learn the procedures, and then opens them up to the relevant content.“ Larry Fallon, Instructional Technology Coordinator, Arlington County Public Schools You can almost hear the buzz- even above the normal tech chatter about the newest smartphones, tablets, watches, and other wearable devices: virtual reality (along with augmented reality) is coming to consumers in the very near future. 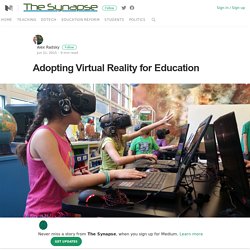 The education industry has historically been a little slow to embrace new technologies. 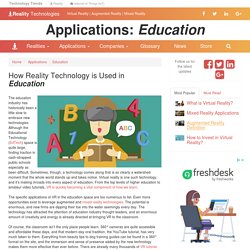 Although the Educational Technology (EdTech) space is quite large, finding traction in cash-strapped public schools especially as been difficult. Sometimes, though, a technology comes along that is so clearly a watershed moment that the whole world stands up and takes notice. Augment app. Pros & Cons of AR. Augmented Reality Glasses: What You Can Buy Now (or Soon) There has been a steady buzz about the virtues of virtual reality, but augmented reality is on the cusp of truly breaking out. 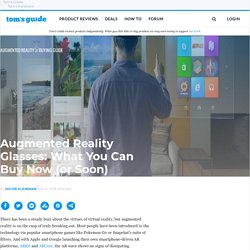 Most people have been introduced to the technology via popular smartphone games like Pokemon Go or Snapchat's suite of filters. And with Apple and Google launching their own smartphone-driven AR platforms, ARKit and ARCore, the AR wave shows no signs of dissipating. But augmented reality is more than catching make-believe creatures and making yourself look like a cute puppy via a smartphone.

Microsoft, Google Vuzix and others have been working to bring AR to us in eyeglass form. Expeditions AR - Bringing the world into the classroom. Virtually Nursing: Emerging Technologies in Nursing Education. The Top 9 Augmented Reality Companies in Healthcare. When Pokemon Go conquered the world, everyone could face the huge potential in augmented reality. 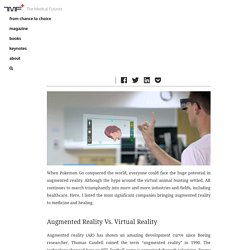 Although the hype around the virtual animal hunting settled, AR continues to march triumphantly into more and more industries and fields, including healthcare. Here, I listed the most significant companies bringing augmented reality to medicine and healing. Augmented reality (AR) has shown an amazing development curve since Boeing researcher, Thomas Caudell coined the term “augmented reality” in 1990. The technology changed how an NFL football game is perceived through television. An Inclusive Guide for Virtual Reality App Development.

Over the past few years, VR and Virtual reality app development have appeared in some effective approaches and applications. Seeing its grand capabilities and benefits, tech-savvies around the globe are in continuous efforts to bring VR in almost every aspect of our everyday life. However, the cheerless fact is, while the whole world is acknowledging and embracing the VR technology in terms of VR app development or other use cases, many of the inhabitants are still unknown about the great emergence of this amazing technology endowment or find it something mysterious. 2020AR - Augmented Reality See Through Glasses by Scott O'Brien, Paul Kouppas, Luke Crane and Peter Koch. A$10 + Reward approx C$10 Special Thanks! Listed on the roll of credits for creating one of the inaugural see through AR HMD applications we shall build. This will appear on our website. Feel the Power of Virtual Reality.

Expert View: 3 ways VR is transforming Learning & Development. Can Virtual Reality Help Fight the Opioid Crisis? Dispatches CRISPR Can Diagnose Zika with Just a Strip of Paper We could be on our way to a fast, reliable, portable test for almost any virus or cancerous mutation. Science.