Gamestorming – A toolkit for innovators, rule-breakers and changemakers 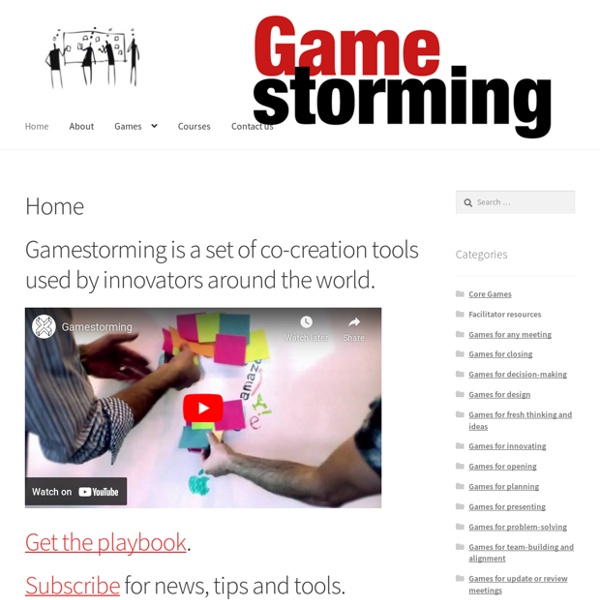 Uncommon Genius: Stephen Jay Gould on Why Dot-Connecting Is the Key to Creativity “Originality often consists in linking up ideas whose connection was not previously suspected,” wrote W. I. B. Beveridge in the fantastic 1957 tome The Art of Scientific Investigation. “The role of the imagination is to create new meanings and to discover connections that, even if obvious, seem to escape detection,” legendary graphic designer Paul Rand seconded. UX Mapping Methods Compared: A Cheat Sheet Designing and developing a product often involves a large team of people with different backgrounds and experiences who must be on the same page about the project goals, the user needs and behaviors, and even the component processes involved. This common understanding is often built with visualizations (commonly referred to as mappings). Mappings make sense of and describe various aspects and processes associated with a product.

The Bitcoin of governance could be coming soon? From a discussion on the pho mailing list: “After late-night discussions with my classmates acknowledging this reality, six of us started a project called Bitgov which ?enables citizens to vote on proposed legislation anywhere and anytime, regardless of nationality. It aims to make it easy for people to understand legislation, but also to express their opinions and join in the decision-making process. Here’s how the technology works: Public opinion is gauged using algorithms to find the most significant social media posts and the opinion leaders. ?We also provide policy makers with clear insights into the sentiments of voters.

The Secret to Creativity, Intelligence & Scientific Thinking When we shared this image from the @buffer Twitter account a while back, it got me thinking. The Tweet resulted in over 1,000 retweets, which seems like an indication that it resonated with a lot of people. There’s a key difference between knowledge and experience and it’s best described like this: A Player Type Framework for Gamification Design [October 2018 Update] Another great study has come out from the HCI guys, it can be found here Empirical validation of the Gamification User Types Hexad scale in English and Spanish Another very misunderstood yet overused metaphor from game design that we use in gamification is Bartle’s Player Types [1]. What follows is an attempt to create something similar to Richard Bartle’s player types, but for gamified systems.

Le projet diaspora* Decentralization Instead of everyone’s data being held on huge central servers owned by a large organization, diaspora* exists on independently run servers (“pods”) all over the world. You choose which pod to register with, and you can then connect seamlessly with the diaspora* community worldwide. The Third Self: Mary Oliver on Time, Concentration, the Artist’s Task, and the Central Commitment of the Creative Life “In the wholeheartedness of concentration,” the poet Jane Hirshfield wrote in her beautiful inquiry into the effortless effort of creativity, “world and self begin to cohere. With that state comes an enlarging: of what may be known, what may be felt, what may be done.” But concentration is indeed a difficult art, art’s art, and its difficulty lies in the constant conciliation of the dissonance between self and world — a difficulty hardly singular to the particular conditions of our time. Two hundred years before social media, the great French artist Eugène Delacroix lamented the necessary torment of avoiding social distractions in creative work; a century and a half later, Agnes Martin admonished aspiring artists to exercise discernment in the interruptions they allow, or else corrupt the mental, emotional, and spiritual privacy where inspiration arises.

Why I don’t like hackathons, by Alex Bayley aged 39 1/2 I seem to have had this discussion a few times lately, so I’m going to save myself the trouble of repeating it and just write down all the problems I have with hackathons. (Yes, I know lots of people have previously posted about what they don’t like about hackathons; I’ve linked some of them at the bottom of this post, if you want some other opinions too.) They’re too much commitment Me: I’m kind of interested in your thing. How can I get involved?Them: We have a hackathon coming up. Design for User Experience—Jarrett Fuller Design for User Experience During the Fall 2016 semester, I taught Design for User Experience at Maryland Institute College of Art in Baltimore, MD. The class focused on interface design and user experience for mobile devices.

Frequently Asked Questions About Agreedis We seek to bring people together to solve problems! Agreedis enables people with vastly different opinions to come together and agree on compromise solutions that may not be their preferred solution, but represents a reasonable compromise that everyone can live with. Yeah, we are still working on that one. The first step is to get people to actually compromise on how to solve a problem. People with creative personalities really do see the world differently What is it about a creative work such as a painting or piece of music that elicits our awe and admiration? Is it the thrill of being shown something new, something different, something the artist saw that we did not? As Pablo Picasso put it: Others have seen what is and asked why. I have seen what could be and asked why not.

The formal elements of game systems and game design atoms « The Acagamic Welcome to the second week of class in the course: Basic Introduction to Game Design. Make sure to read the syllabus and course information before you continue. Today, we are going to discuss the formal system structures of games (an introduction to its formal and dramatic elements) and game design atoms. This text follows closely from our textbooks (Game Design Workshop, Chapters 2 & 3 and Challenges for Game Designers, Chapter 2); it also takes inspiration from the Salen and Zimmerman book Rules of Play (Chapters 5,6,7). Keep in mind that game design is a field of practice and even when you are reading all the information from this course, there is no substitute for working on some games at home for practice. The Definition of Games