After Orlando, Examining the Gun Business 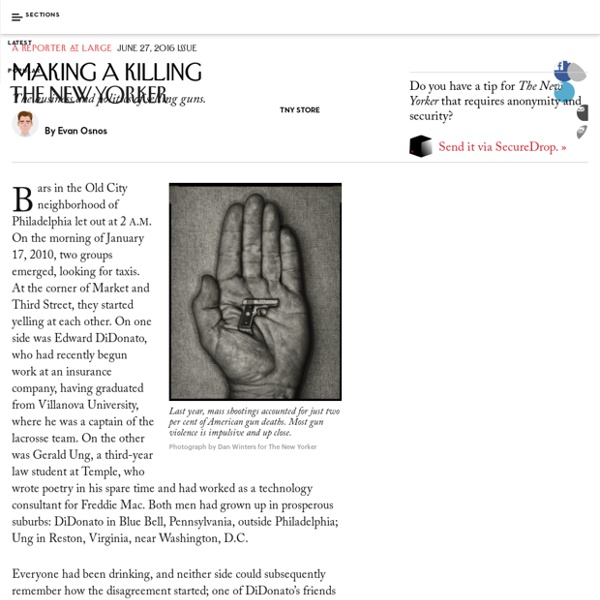 Bars in the Old City neighborhood of Philadelphia let out at 2 A.M. On the morning of January 17, 2010, two groups emerged, looking for taxis. At the corner of Market and Third Street, they started yelling at each other. On one side was Edward DiDonato, who had recently begun work at an insurance company, having graduated from Villanova University, where he was a captain of the lacrosse team. On the other was Gerald Ung, a third-year law student at Temple, who wrote poetry in his spare time and had worked as a technology consultant for Freddie Mac. Both men had grown up in prosperous suburbs: DiDonato in Blue Bell, Pennsylvania, outside Philadelphia; Ung in Reston, Virginia, near Washington, D.C. Everyone had been drinking, and neither side could subsequently remember how the disagreement started; one of DiDonato’s friends may have kicked in the direction of one of Ung’s friends, and Ung may have mocked someone’s hair. None of that has hurt the gun business. The U.S.

I’ve Been Reporting on MS-13 for a Year. Here Are the 5 There’s one thing everyone can agree with President Donald Trump on about the street gang MS-13: The group specializes in spectacular violence. Its members attack in groups, in the woods, at night, luring teens to their deaths with the promise of girls or weed. One Long Island boy told me he doesn’t go to parties anymore because he worries any invitation could be a trap. A victim’s father showed me a death certificate that said his son’s head had been bashed in, then lowered his voice and added that the boy’s bones had been marked by machete slashes, but he didn’t want the mother to know that. A teenager who has left the gang told me he considers himself dead already, and is just trying to make sure MS-13 doesn’t kill his family. I’m spending the year reporting on MS-13 members and their associates.

The United States and the Making of Nazi Race Law’ To get to the core of race in America today, read this new book by James Whitman. Whitman is the Ford Foundation Professor of Comparative and Foreign Law at Yale Law School. Prepare to be as startled as this respected legal scholar was when he came upon a meticulous record of a meeting of top lawyers in Nazi Germany after Hitler’s rise to power. Not only did those lawyers reveal a deep interest in American race policies, the most radical of them were eager advocates of using American law as a model. Scholars and historians have argued for years about whether American’s own regime of racial oppression in any way inspired the Nazis. Deaf children losing out as English councils cut support, charity warns More than a third of councils in England are cutting educational support totalling £4m for deaf children, according to figures obtained by the National Deaf Children’s Society (NDCS). The figures, gained through freedom of information requests, show that councils in these areas are cutting 10% on average from deaf children’s services, which the charity warns are already near breaking point. In the last four years, one in 10 specialist teachers of the deaf have been cut, the charity claims. Meanwhile, deaf children are falling behind at every stage of school, and at GCSE two-thirds of deaf children fail to achieve a grade 5 in both English and maths – a key government target. The NDCS said it had received responses from 122 councils, of which 45 said they were making cuts between 2017-18 and 2018-19. The cuts come as councils across England struggle to meet growing demand for support for children with special needs.

Fact-checking an immigration meme that's been circulating for more than a decade A viral image on social media -- one that’s critical of illegal immigration -- has been circulating for years. The list of claims first circulated in the form of a chain email in 2006, according to Snopes.com. Six years later, we checked several of the claims ourselves. With immigration in the headlines today, these claims are popular again. When Dissent Became Treason America and the Great War: A Library of Congress Illustrated History by Margaret E. Wagner, with an introduction by David M. Kennedy Ronald Reagan and The Great Social Security Heist : FedSmith.com View this article online at Ronald Reagan was one of the most popular presidents in modern history. As a former Hollywood actor, he had an uncommon degree of charisma.