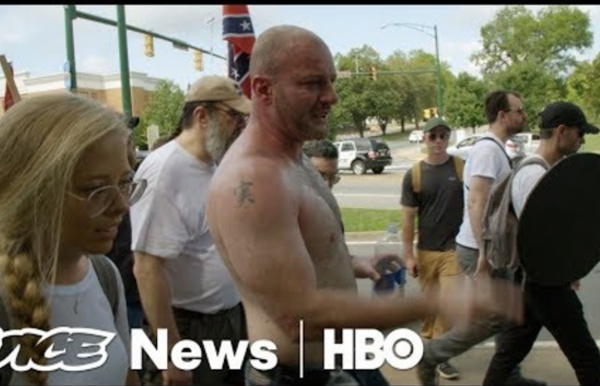 A Short History of 'America First' That maybe true, but Bannon’s stated positions, white-nationalist support for Trump, and the president’s tepid disavowal of that support are only likely to raise more questions about what he meant by “America first.” The phrase in itself might provide comfort for those of Trump’s supporters who have long railed against what they see as lawmakers in Washington catering to special interests, corporations, and other countries at the expense of, in their view, the American worker. But the phrase “America first” also has a darker recent history and, as my colleague David Graham pointed out Friday, was associated with opponents of the U.S. entering World War II. The America First Committee (AFC), which was founded in 1940, opposed any U.S. involvement in World War II, and was harshly critical of the Roosevelt administration, which it accused of pressing the U.S. toward war.

The 'Far Right' in America: A Brief Taxonomy Nazis and Neo-Nazis The term “Nazis” is generally reserved for former members of the National Socialist German Workers’ Party, which ruled Germany from 1933 to 1945 under the leadership of Adolf Hitler and oversaw the Holocaust. The Allies legally abolished the party at the end of World War II; only a handful of its original members are still alive. The most-wanted Nazis still sought by the Simon Weisenthal Center, the most prominent Nazi-hunting organization, are elderly ex-guards who served in concentration camps in eastern and central Europe.

Slavery WebEnglish.se A theme page about slavery in America, suitable for intermediate level (A2.2-B1) students, year 8-9, and B1 in Sweden. Related Pages: Black Lives Matter, Modern Slavery, Black History – Civil Rights, Racism, Human Rights Background Ku Klux Klan American white supremacy group The first Klan flourished in the Southern United States in the late 1860s during Reconstruction, then died out by the early 1870s. It sought to overthrow the Republican state governments in the South, especially by using voter intimidation and targeted violence against African-American leaders. The Heroes Unit: Subunit 2 – Modern Day Heroes – The Canswedian English Teacher Subunit 2: Modern day Heroes The purpose with this assignment is forcing students to get outside of their own backyards and hopefully get a little inspiration. There are so many role models out there that students are not aware of. The next step in this heroes unit is talking about present day heroes. I have four biographies I use: Malala, Aung San Sun Kyi, Mandela and Terry Fox.

Rivers of Blood speech The expression "rivers of blood" did not appear in the speech but is an allusion to a line from Virgil's Aeneid which he quoted: "as I look ahead, I am filled with foreboding; like the Roman, I seem to see 'the River Tiber foaming with much blood'."[1] ‘A politics of nostalgia and score-settling’: how populism dominated the 2010s On Wednesday 28 April 2010, 20 months had passed since the financial crash of 2008, and there were eight days left until the UK general election. Soon, the reins of government would be taken by the Conservative-Liberal Democrat coalition, committed to a programme of austerity that would still be making its effects felt a decade later. But for another fortnight, Gordon Brown would be prime minister, and he was on a walkabout in Rochdale, Greater Manchester. It was there that he was introduced to 65-year-old Gillian Duffy. Surrounded by men in suits, and accompanied by the snap of cameras, Duffy ran through a mess of grievances – about the tax she had to pay on her pension, the state of the national finances, and a benefits system she claimed paid out to people who “aren’t vulnerable” while denying help to those who needed it.

Book Excerpt: My Forbidden Face, by Latifa — When the Taliban took over the Afghan capital, Kabul, in 1997, Latifa was a 16-year-old teenager, listening to Elvis and dreaming of going to college. The Taliban's harsh rule transformed her life for the next four years. Following is an excerpt from her book, My Forbidden Face: Growing Up Under the Taliban — A Young Woman's Story, which she wrote in exile after fleeing the Taliban regime in 2001.

Viewpoint: Why racism in US is worse than in Europe Media playback is unsupported on your device News stories emerge almost daily in the US about police being called over black Americans doing nothing more than being black. Writer Barrett Holmes Pitner explains why he thinks American racism is unique. Last week in California, three black people - a Jamaican, a Canadian of Nigerian descent, and a London native - were confronted by seven police cars as they checked out of their Airbnb because a white American thought they were robbing the house. Though they were not American, they were still subjected to racist American stereotypes - and being confronted with tense, potentially life-threatening altercations with police without ever committing a crime. I've travelled a fair amount around the world, but America's racist status quo remains unique and alarmingly oppressive.

English Conversation – Human Rights This is the preparation material for an English conversation lesson about human rights. Human rights are rights inherent to all human beings, whatever our nationality, place of residence, sex, national or ethnic origin, colour, religion, language, or any other status. We are all equally entitled to our human rights without discrimination. Universal human rights are often guaranteed by the law of a country, general principles and other sources of international law. 'America First' or 'America Alone?': US should decide, Tony Blair says Former Prime Minister of Great Britain and Northern Ireland Tony Blair speaks during the Web Summit 2018 in Lisbon, Portugal on November 7, 2018. ( Photo by Pedro Fiúza/NurPhoto via Getty Images) NurPhoto | NurPhoto | Getty Images The U.S. needs to look at where it stands in relation to its allies like Europe, the U.K.’s former prime minister told CNBC Tuesday, saying there are concerns over whether the country is putting itself first, or in isolation. “The worry all the time, I think not just in Europe but outside — is where does the U.S. stand in this slightly difficult space between ‘America First’ and ‘America Alone’?,” Tony Blair, the U.K. prime minister from 1997 to 2007, told CNBC Tuesday.