Why do we think poor people are poor because of their own bad choices? 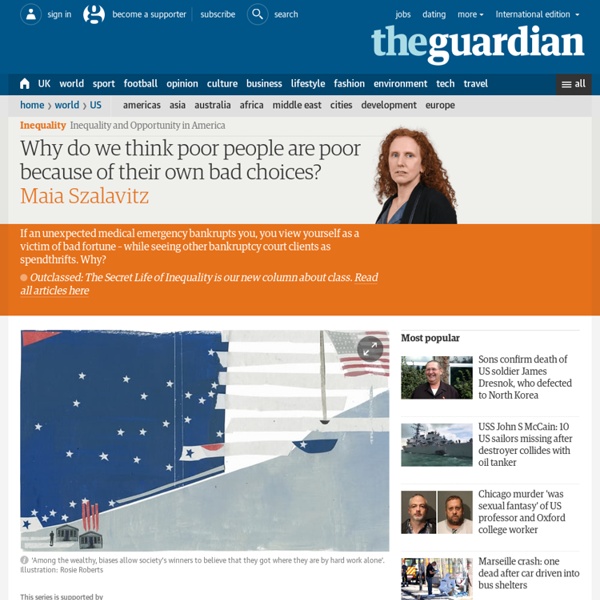 Cecilia Mo thought she knew all about growing up poor when she began teaching at Thomas Jefferson senior high school in south Los Angeles. As a child, she remembered standing in line, holding a free lunch ticket. But it turned out that Mo could still be shocked by poverty and violence – especially after a 13-year-old student called her in obvious panic. He had just seen his cousin get shot in his front yard. For Mo, hard work and a good education took her to Harvard and Stanford. But when she saw just how much chaos and violence her LA students faced, she recognized how lucky she had been growing up with educated parents and a safe, if financially stretched, home. Now, as an assistant professor of public policy and education at Vanderbilt University, Mo studies how to get upper-class Americans to recognize the advantages they have. It all starts with the psychology concept known as the “fundamental attribution error”. As the dream has faded, however, its effects have not.

Related:  How to Think Critically. Fake News • Thoughts • World View • Cultures - other humans • All your base are - Various + Solutions or Need One

The 2018 Midterms and the Specter of Voter Suppression Read: The ‘hubris’ of the Supreme Court’s voting-rights ruling On Saturday, President Donald Trump ensured that the issue would be front and center as Election Day approached. “All levels of government and Law Enforcement are watching carefully for VOTER FRAUD, including during EARLY VOTING,” he tweeted.

Knowledge of different cultures shakes up psychology 2 clicks The academic discipline of psychology was developed largely in North America and Europe. Some would argue it’s been remarkably successful in understanding what drives human behaviour and mental processes, which have long been thought to be universal. But in recent decades some researchers have started questioning this approach, arguing that many psychological phenomena are shaped by the culture we live in.

In poverty, groceries can be five times more expensive A hidden camera in a San Francisco grocery store last year captured patrons' reactions when their items ring up as five times more expensive, adjusted to reflect the cost of living near the poverty line. In "Poverty Line Prices," above, people are shocked when they see their totals. When you're poor, milk can have an adjusted cost of $24. The video comes from Tipping Point Community, an organization that combats poverty in the Bay Area, and advertising agency Goodby Silverstein & Partners. In San Francisco, the average annual family income is $153,000, five times the $24,300 a year that families living on the poverty line earn (or roughly 1 in 10 families in San Francisco).

The tricks propagandists use to beat science Back in the 1950s, health professionals became concerned that smoking was causing cancer. Then, in 1952, the popular magazine Reader’s Digest published “Cancer by the Carton,” an article about the increasing body of evidence that proved it. The article caused widespread shock and media coverage. Today the health dangers of smoking are clear and unambiguous.

25 Captivating Pictures of Street Scenes Around the World Amid the thrum and whirl of city life, today’s street photographers patiently wait for what their forebear, the influential French photographer Henri Cartier-Bresson, famously termed “the decisive moment:” that split-second when the visual and emotional elements of a scene come together to express its essence. Street photography is about the possibility—though never the promise—of capturing a flicker in time that might make a good photograph. That might mean glimpsing a symmetrical group of nuns in a Kolkata doorway and instinctively framing the image.

Don't Be Fooled: 'Generation Wealth' Is More About Wanting Than Having Jackie and friends with Versace handbags at a private opening at the Versace store, Beverly Hills, California, 2007. Lauren Greenfield/INSTITUTE hide caption toggle caption Lauren Greenfield/INSTITUTE "fake news" not new 2 clicks Donald Trump may well be remembered as the president who cried “fake news.” It started after the inauguration, when he used it to discredit stories about the size of the crowd at his inauguration. He hasn’t let up since, labeling any criticism and negative coverage as “fake.” Just in time for awards season, he rolled out his “Fake News Awards” and, in true Trumpian fashion, it appears he is convinced that he invented the term. He didn’t.

Growing Up Surrounded by Books Has a Lasting Positive Effect on the Brain, Says a New Scientific Study Image by George Redgrave, via Flickr Commons Somewhere in the annals of the internet--if this sprawling, near-sentient thing we call the internet actually has annals--there is a fine, fine quote by filmmaker John Waters: We need to make books cool again. If you go home with somebody and they don’t have books, don’t fuck them. Don’t let them explore you until they’ve explored the secret universes of books.

Related:  Priority Reading 3-Full • Articles
Related:  How to Think Critically. Fake News   -  Thoughts   -  World View   -  Cultures - other humans   -  All your base are - Various + Solutions or Need One