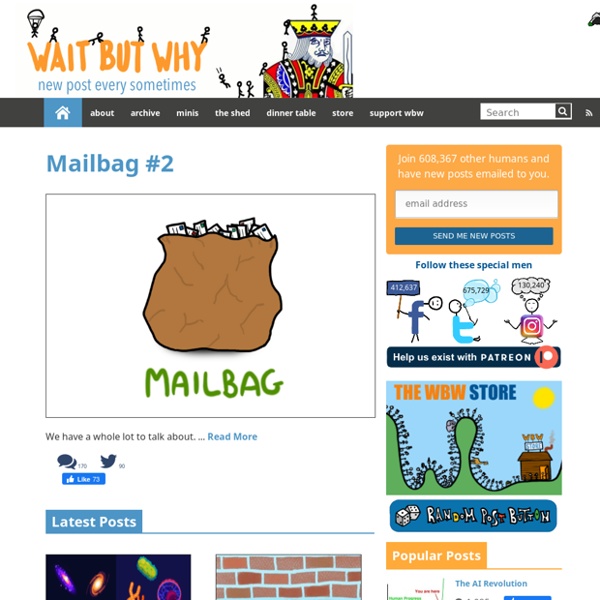 12 Books Recommended By Jeff Bezos – RecommendedBooks – Medium Jeffrey Preston Bezos is an American technology and retail entrepreneur, investor, computer scientist, and philanthropist who is best known as the founder, chairman, and chief executive officer of Amazon.com, the world’s largest online shopping retailer. 1. The Innovator’s Dilemma When New Technologies Cause Great Firms to Fail by Clayton M. View From a Park Bench: Friday's Five - Classic Soft Drinks Today it’s Pepsi Max Or Cherry Coke Soft drinks have been the stuff that afternoon picnics and parties were made for I once had a Boss who was addicted to Iru-Bru, Rationality: From AI to Zombies - Lesswrongwiki Ebook cover image. Rationality: From AI to Zombies is a 2015 ebook by Eliezer Yudkowsky on human rationality and irrationality in cognitive science. The ebook can be downloaded on a "pay-what-you-want" basis from intelligence.org or viewed on the website readthesequences.com It is an edited and reorganized version of the Sequences, a series of blog posts published to Less Wrong and Overcoming Bias between 2006 and 2009.

garcia_cv Garcia, G. D. & H. Goad. (in prep). Can you have stress without feet?Garcia, G. Here Are The Most- And Least-Trusted News Outlets In America News outlets like CNN and ABC News might have the biggest audiences, but they're not the most trusted across-the-board in America. The most trusted news outlets in America, according to a new study from Pew Research Center, are actually British. BBC and The Economist top the list of outlets that are trusted by every ideological group, while BuzzFeed and The Rush Limbaugh Show are at the bottom.

Vault7 - Home Today, Tuesday 7 March 2017, WikiLeaks begins its new series of leaks on the U.S. Central Intelligence Agency. Code-named "Vault 7" by WikiLeaks, it is the largest ever publication of confidential documents on the agency. The first full part of the series, "Year Zero", comprises 8,761 documents and files from an isolated, high-security network situated inside the CIA's Center for Cyber Intelligence in Langley, Virgina. It follows an introductory disclosure last month of CIA targeting French political parties and candidates in the lead up to the 2012 presidential election. Welcome to GrokNation! Dear Grokites (that’s you!), There are so many ways you might have found us at GrokNation, and however you came here, whatever your path was, we welcome you. It’s hard to know how to address “you” because you might be any of the following – or a combination of the following: All of you hail from different faith communities and political perspectives and with varying interests, concerns and passions.

Harvest of Grapes – Writings of Connor Creegan 1. The tone of this series doesn’t merit a formal introduction as I would include in an essay or some other form of biographical writing. Instead, I will briefly preface this article with some cursory information about what this series is, my intent in publishing it, and a few other necessary prerequisites. Top 50 ggplot2 Visualizations - The Master List (With Full R Code) What type of visualization to use for what sort of problem? This tutorial helps you choose the right type of chart for your specific objectives and how to implement it in R using ggplot2. This is part 3 of a three part tutorial on ggplot2, an aesthetically pleasing (and very popular) graphics framework in R. This tutorial is primarily geared towards those having some basic knowledge of the R programming language and want to make complex and nice looking charts with R ggplot2.

Press Accuracy Rating Hits Two Decade Low Public Evaluations of the News Media: 1985-2009 Overview The public’s assessment of the accuracy of news stories is now at its lowest level in more than two decades of Pew Research surveys, and Americans’ views of media bias and independence now match previous lows. Just 29% of Americans say that news organizations generally get the facts straight, while 63% say that news stories are often inaccurate. Operations Data Platform Beyond Application Monitoring This post is part of a series about the new Era of Log Analytics. Be sure to check out the post Application Troubleshooting & Investigation Best Practices if interested in some more advanced tips.

About — Linda Holmes I'm a podcast host, writer, radio maker, interviewer, Twitter liker, Twitter fearer, former lawyer, one-time college a cappella singer, occasional bread baker, photography dabbler, and very lucky weirdo. I'm the host of Pop Culture Happy Hour, NPR's roundtable culture and entertainment podcast. I'm also the creator of its pop culture blog, Monkey See. I've worked with most of the radio shows they have in some capacity: I've talked about pop culture on All Things Considered, Morning Edition, and Weekend Edition. I once spent a week writing for Wait Wait, Don't Tell Me, took a turn guest-hosting Jesse Thorn's wonderful interview show Bullseye, and did a terrible job answering questions about music on a bonus episode of Ask Me Another. I do local live radio whenever they let me.

Lev Shestov - Dostoevsky, Tolstoy and Nietzsche - ToC THE GOOD IN THE TEACHING OF TOLSTOY AND NIETZSCHEPhilosophy and Preaching Preface Chapters 1 2 3 4 5 6 7 8 9 10 11 12 13 14 15 Translated by Bernard Martin 8 Puzzles That Might Keep You Up All Night Some research has proven that solving riddles and puzzles is exceptionally beneficial for your brain. It sharpens your mind, improves your memory, and teaches you to pay attention to small details. And it’s simply fun.