Protect Your Library the Medieval Way, With Horrifying Book Curses 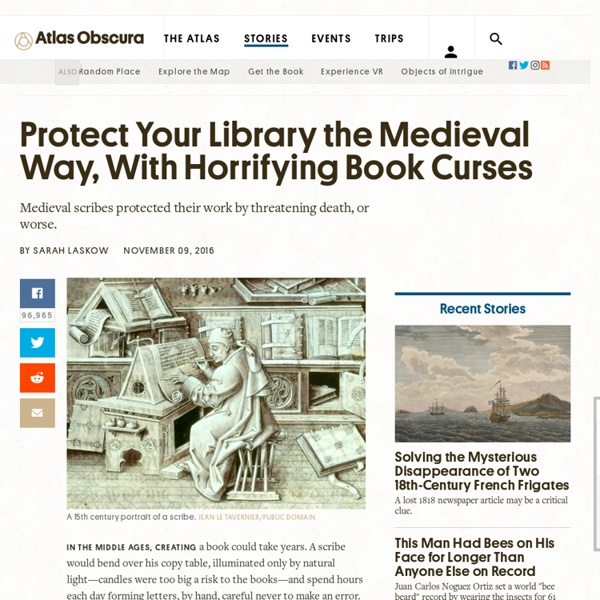 In the Middle Ages, creating a book could take years. A scribe would bend over his copy table, illuminated only by natural light—candles were too big a risk to the books—and spend hours each day forming letters, by hand, careful never to make an error. To be a copyist, wrote one scribe, was painful: “It extinguishes the light from the eyes, it bends the back, it crushes the viscera and the ribs, it brings forth pain to the kidneys, and weariness to the whole body.” Given the extreme effort that went into creating books, scribes and book owners had a real incentive to protect their work. They used the only power they had: words. At the beginning or the end of books, scribes and book owners would write dramatic curses threatening thieves with pain and suffering if they were to steal or damage these treasures. They did not hesitate to use the worst punishments they knew—excommunication from the church and horrible, painful death. The curse of excommunication—anathema—could be simple.

Related:  Thoughts • Who Let The Nerd Out ? • Storia

When Will Climate Change Make the Earth Too Hot For Humans? To read an annotated version of this article, complete with interviews with scientists and links to further reading, click here. Peering beyond scientific reticence. It is, I promise, worse than you think. If your anxiety about global warming is dominated by fears of sea-level rise, you are barely scratching the surface of what terrors are possible, even within the lifetime of a teenager today. And yet the swelling seas — and the cities they will drown — have so dominated the picture of global warming, and so overwhelmed our capacity for climate panic, that they have occluded our perception of other threats, many much closer at hand. Rising oceans are bad, in fact very bad; but fleeing the coastline will not be enough.

What Cringing at Your Own Voice Reveals About You So you hate the sound of your own voice. This complaint has become something of a cliché, perhaps especially on media Twitter, in that journalists routinely confess that they are procrastinating an interview transcription because hearing their own recorded voice is so unbearable. And yet of course the hatred itself existed long before Twitter; studies dating back to the 1960s have demonstrated that people dislike hearing recordings of their own voices, whereas listening to playbacks of friends’ or strangers’ voices didn’t bother them. What happens to the unprotected human body in space? It's a recurring horror in sci-fi: the hull is pierced, a human is trapped without equipment in an airlock about to open, a door needs to be opened in order to expel something undesirable. With no air and almost zero pressure, the human body isn't going to last long without some form of protection. But what does happen, exactly? Do your eyes explode outward while your blood evaporates?

The Classics Pages You'll find well over 1000 pages of news, information, games and controversy about the life, literature, philosophy, art and archaeology of the ancient world of Greece & Rome. Search The Classics Pages (including "The Romans" - below) has a dedicated search engine, accessible from any page. Search now. Email The Classics Pages welcomes your emails - whether you want to comment, query or argue. 6 Weird Dating Traditions In History That Might Actually Make You Grateful For Tinder We hear a lot about the so-called "golden age" of dating — the early '50s and '60s, where men brought flowers, opened doors, and generally behaved as if their date was a piece of fine china without any agency — and how modern casual attitudes have made the process both less formal and less magical. But it's important to remember that taking a girl to a drive-in movie and sharing a milkshake on the way home, (while it might seem charmingly complicated and puritan to us), is actually pretty damn daring when you look at the history of dating and courtship. Throughout history, people have concocted all kinds of ways to express love and propose marriage in the confines of their societies — and they've had to get very inventive.

phantom time hypothesis How could I have written a whole book about conspiracy theories without once encountering Heribert Illig? I just stumbled over a reference to his “phantom time hypothesis” and now I’m finding him everywhere. A prolific crank in the grand tradition of Ignatius L. Donnelley and Immanuel Velikovsky, Illig has spent many years elaborating and defending his proposition that the years 614-911 CE were invented and inserted into histories ex post facto at the behest of Otto III. The present year is not 2010, but 1713; Charlemagne and Alfred the Great were fictional characters; the Viking raids never happened; etc.

Why Do Flammable and Inflammable Mean the Same Thing? 1449 412Share949 Understand the wrong definition of inflammable and you might end up with more than an embarrassing situation while talking to your English professor. Inflammable and flammable are two words that are frequently misinterpreted. Aryan migration: New genetic study makes Out of India theory backed by Hindutva supporters unlikely A new paper authored by 92 scientists from around the globe that was posted online this weekend could settle some major questions about the subcontinent’s history and what that means for various theories of Indian civilisation. The paper, titled “The Genomic Formation of South and Central Asia” which still has to go through peer review, uses genetics to examine the ancestry of ancient inhabitants of the subcontinent. Below is a quick summary of what you need to know. Who authored the study? There are 92 named authors on the study, including scholars from Harvard, MIT, the Russian Academy of Science, the Birbal Sahni Institute of Paleosciences in Lucknow, the Deccan College, the Max Planck Institute, the Institute for Archaeological Research in Uzbekistan and the Centre for Cellular and Molecular Biology, Hyderabad.

15 Maniacs and What They're Obsessed With 1. Clinomaniacs must fight the excessive desire to stay in bed. Especially on Mondays. 2. People who can never make up their minds might be aboulomanics. Or they might not. Crash Course: Evolution of the Roman Military Accorded by some as being the most effective and long-lived military institution known to history, Rome’s military was the key to its rise from a relative backwater settlement in Italy to the most dominant power of the ancient world. Throughout its millennia-spanning history, Rome’s military underwent substantial changes as it contended with challenges both within its expanding borders and from neighboring adversaries who threatened to harm the integrity of its borders. Here is a crash course on the evolution of the Roman military.

Exploding Head Syndrome Exploding head syndrome (EHS) is a disorder characterized by the perception of loud noises (e.g. a bomb explosion, gunshot or cymbal crash) when going to sleep or awakening. Contrary to the name, ENS is not associated with pain. However the noise attacks can elicit a great deal of fear, confusion and distress in sufferers. Reports of tachycardia and palpitations are also common. Despite the distressing nature of EHS, relatively little is known about the prevalence and underlying cause of the condition. What medieval Europe did with its teenagers Image copyright Getty Images Today, there's often a perception that Asian children are given a hard time by their parents. But a few hundred years ago northern Europe took a particularly harsh line, sending children away to live and work in someone else's home.