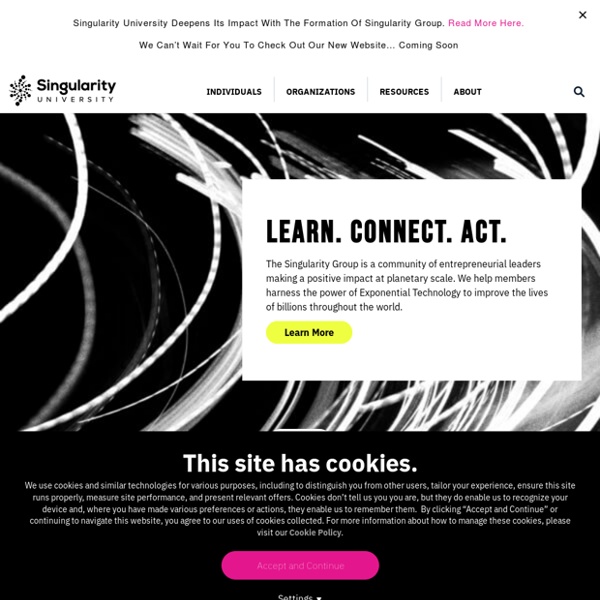 International Education News l The PIE News l Futurists say tech key to HE access, grad readiness Using video images of the 2011 tsunami in Japan, Yuri van Geest, founder of think tank SingularityU, called on educators to act before the rising tide of technological advancements. Citing examples that already exist today, including voice recognition technology used by human resource departments, Geest said technological development is shifting from the ice phase, to water and now steam. “People and ideas are interacting like never before” “People and ideas are interacting like never before,” he commented, predicting a new model of work where smaller teams of employees rely on communities to outsource specific tasks. “It’s flips the whole system inside out,” he said. “There’s less ownership and more access.”

7 Powerful Public Speaking Tips From One of the Most-Watched TED Talks Speakers You’d never know it, but Simon Sinek is naturally shy and doesn’t like speaking to crowds. At parties, he says he hides alone in the corner or doesn’t even show up in the first place. He prefers the latter. Yet, with some 22 million video views under his belt, the optimistic ethnographer also happens to be the third most-watched TED Talks presenter of all time. The Urgent and The Important In a 1954 speech to the Second Assembly of the World Council of Churches, former U.S. President Eisenhower said: “I have two kinds of problems: the urgent and the important. The urgent are not important, and the important are never urgent.” Robert Glazer shared this simple but powerful life management tool on his blog today – Dwight D.

How will you prepare your kids for the world of work? A wise old sage once told me that being parent is like being an archer complete with bow and arrow—your kids are your arrows and your job as a parent is to take aim, fire, and with fingers crossed hope they hit their mark. I liked that analogy because one of my kids is about to select her options for her exams at 16 and thoughts all round are turning to what she wants to do. Being part of Cognizant’s Center for the Future of Work, means for once she might actually listen to what I have to say!

Team-Based Software Innovation Welcome to the Essence homepage Just about everybody is for innovation, everybody talks about it and finds it vitally important, but somehow we seem to have a a shortage of methodological advice on how to make innovation more likely to occur in software development – at least at the level of the software team or project. Essence is an attempt to offer such advice and complement the contributions of other writers such as my good colleague, Jeremy Rose (Rose, J. (2010). Software Innovation: eight work-style heuristics for creative software developers. Aalborg, Software Innovation, Aalborg University). Essence is a methodology supporting innovative software teams.

Singularity University: The Harvard of Silicon Valley Is Planning for a Robot Apocalypse The students and teachers at Singularity University welcome a future where robots run the world. During a recent Executive Program at Silicon Valley’s Singularity University, the institution’s co-founder Peter Diamandis made some confident predictions. Within the next decade, he said, self-driving cars will eliminate all driving fatalities. Artificial intelligence will soon surpass the skills of the best human doctors and remove all inefficiencies from health care systems.

A Marketer's Complete Guide to Launching Mobile Apps According to former CEO of AppVee and AndroidApps Alex Ahlund, the average cost to develop a mobile app is $6,453 -- and the cost can skyrocket to as much as $150,000 depending on the complexity of the app. Wherever you fall on that spectrum, the money and resources you dedicate to conceptualizing and developing a truly great mobile app can all be put to waste if you don't orchestrate a proper mobile app launch. In fact, in December 2011, the 1 millionth mobile app was pushed to market. To give you an idea of just how quickly these mobile apps are being released, at the end of 2010, there were 300,000 mobile apps. That's a 233% increase in just 12 months. In other words, that's a lot of clutter in mobile app stores (and we won't even get into the fact that 1 in 4 apps, once downloaded, are never used again.)

How to Stop Offering Free Advice and Make the Sale In this special feature of 'Ask Entrepreneur,' Facebook fan James Schulman asks: For a consulting service, how do you make the sale without giving away expert advice for free? Customers will not appreciate you, your company or for that matter, your advice until they pay for it. The greatest challenge for the expert is not giving away free information but that most have not taken the time to become great at closing the deal. Here are some tips that will ensure you begin making the sale. First, make sure the prospect knows what you can achieve.

Cognizant Technology Solutions A paperless ICU and better post-op care Narayana Health Open-heart surgery patients at Narayana Health are living longer, healthier lives as a result of the hospital’s paperless intensive care unit, where a family of iPad apps integrates with medical equipment to feed medical teams instant, relevant patient data that improves care during the critical first hours after surgery. Cognizant collaborated with Narayana Health to develop an automated and digitally transformed ICU system that brings a single, accurate window on patient status to an iPad at each patient’s bed. Leveraging data from equipment, lab, imaging, clinicians and patient records into a single source of truth improves handoffs from shift to shift and control of infection risk throughout the unit, and leaves fewer opportunities for human error.

The Ten Myths of Innovation: the best summary I wrote the bestselling book The Myths of Innovation to share the truths everyone should know about how big ideas really change the world. Far too much of what we know about creativity isn’t based on facts at all, and my mission is to change this. Since its publication I’ve seen bloggers summarize the book into simple lists (or cheezy videos), but here’s a version written by my own hand. You can also see my compilation of 177 innovation myths others have written about. The book was heavily researched with 100s of footnotes and references, but here’s the tightest summation: The myth of epiphany.

The End of School — Life Learning Once upon a time, unless you were aristocracy or a member of a philosophical class, the most common way for you to get educated was not to craft your own curriculum with the help of a mentor or coach but to go to school. Assuming you weren’t needed to keep your family alive by farming, collecting food, hunting, or working a factory, you went where other children in your class went: to school. The idea behind the community school was economies of scale.

20 Best Self Growth Books That Will Change Your Life - Simona Rich Read these self growth books to improve your life and gain a better understanding of wealth, success principles and health. 1. “The 4-Hour Work Week” by Tim Ferris