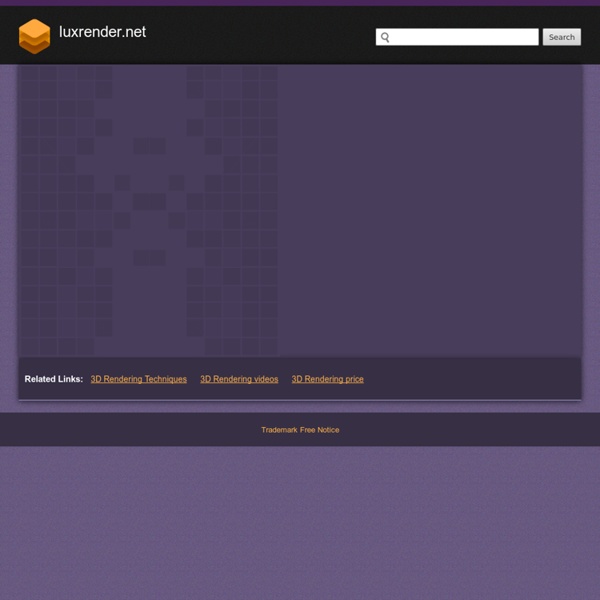 LuxRender is a physically based and unbiased rendering engine. Based on state of the art algorithms, LuxRender simulates the flow of light according to physical equations, thus producing realistic images of photographic quality. LuxRender is now a member project of the Software Freedom Conservancy which provides administrative and financial support to FOSS projects. This allows us to receive donations, which can be tax deductible in the US. To get started with LuxRender, choose a package: LuxRender is free software - both for personal and commercial use - and is licensed under the GPL. Physically based spectral rendering LuxRender is built on physically based equations that model the transportation of light. Materials LuxRender features a variety of material types. Fleximage (virtual film) The virtual film allows you to pause and continue a rendering at any time. Free for everyone LuxRender is and will always be free software, both for private and commercial use.

CNC Conversion Kits from MicroKinetics DIY CNC Conversion Kits For the do it yourselfer, we offer complete conversion kits that you can install on your own machine. This is a great way to make a top notch cnc machine with less financial investment and at the same time enjoy the process and have the satisfaction of building your own high quality CNC. MicroKinetics' CNC conversion kits require no wiring or soldering. [Animating in 2.5] Getting to grips with Keying Sets Over the past few months, I've been observing quite a bit of confusion over some aspects of the animation system in 2.5 that's all related to "Keying Sets". These are a rather important new feature aimed at improving the animation workflow, but which many people don't seem to be aware of. So, if you're wondering why you're getting a "weird" error message when trying to insert keyframes, or if you'd just like to learn some new workflow tricks to make animating easier, read on :) A bit of history first... (2.4x days) What many may not be aware of, is that you've (assuming you have used the 2.4x series) been using Keying Sets for a lot longer than you know.

Sculptris Focus as an artist on pure creativity Enter Sculptris, a fun and engaging way to start off your digital sculpting journey! If you're new to the world of digital sculpting, Sculptris is the ideal ground on which to get started. If on the other hand you're experienced in CG, we offer you ZBrush. With our award-winning software, ZBrush, released more than a decade ago, Pixologic, makers of ZBrush and Sculptris, has become recognized for bringing ground-breaking innovations into the world of digital art. Sculptris Artist: Taron Baysal Thea Render The new integrated plugin for 3dsMax has just arrived and licensed users can grab the plugin as a free update! Bundle with Motiva Colimo and create infinite variations from a single render. Perform luminance and illuminance analysis and generate reports out-of-the-box. Thea Render offers a variety of high quality Model and Material Libraries.

Introduction to LuxRender - LuxRender Wiki From LuxRender Wiki LuxRender is a physically based and unbiased rendering engine. Based on state of the art algorithms, LuxRender simulates the flow of light according to physical equations, thus producing realistic images of photographic quality. The program is based on the PBRT project, but differs from that program by focusing on production rendering and artistic efficiency instead of scientific purposes. Valkyrie: $100 Arduino based CNC Apparently this CNC machine can be made in about 30 hours for approximately $100. It’s powered by an Arduino which interprets the code sent to it via Python. The Arduino then sends the data to the custom motor controllers that are based on the ATtiny 2313 and l298. This is the second version of a homemade CNC machine build using mostly off the shelve parts. The first one aka “The beast” had a lot of precision issues due to play in most parts which in turn was caused by mostly bad cutting. Also one of the biggest problems was that when I have build it I did not think to allow later adjustments to be done.

Blender 2.5 tutorials and training game · level · character Using the Blender tutorials and training available below, learn how to use Blender 3D for content creation and game development. Pick up essential skills for properly optimised models, efficient level design and texture making. In-depth, extensive and unique explanations of methods and principles you won't find anywhere else, seriously! Not just on using Blender 3D, but also the 'hidden' and less talked about core subjects associated with content and game development, all of if freely available to those looking for it.

hdriLibrary Bunkspeed’s HDRILibrary is one of the world’s largest royalty-free HDRI stock libraries. Whatever your project, we can provide an HDRI environment to suit your needs, accompanied by background photography. Just follow the 3 steps and start producing some fantastic visuals. New Arduino Mega CNC machine......(UPDATED) My new machine, the other one was a prototype, now this one will use all the electronics.... Made with MDF, bigger than the prototype...... Almost done... My new control box, X, Y, Z axis, DB9 conector for the limit switches, and usb conection to computer. Better cable arrangement.....

3D Models <center><div class="site_errors"><div class="floatType_site_error_top"></div><div class="floatType_site_error"><table summary="layout table"><tr><td bgcolor="#000000"><font color="#ffffff"><h2><img src="/templateimages/redesign/modules/overlay/site_error.gif" title="Site Error" alt="Site Error"/>There's a problem with your browser or settings. </h2></font><font color="#ffffff"><p>Your browser or your browser's settings are not supported. To get the best experience possible, please download a compatible browser. Smoothieboard 4x – Uberclock Note: Until we have higher inventory levels we ask that you please limit your order to a maximum of 5 Smoothieboards per individual. If you are interested in reselling Smoothieboards or including Smoothieboard in your own product please contact us directly for more information and to discuss options. Thanks for understanding!

Latest Build Available – Soon to be released to the public for testing! « Save The Ocean Sim – Project News We’ve been on a bit of a break due to holidays, and work schedules, but I wanted to let you know about the latest build of the Ocean Simulation Tools version of Blender that has been posted. Contrary to some people’s belief, the project has not died, and work is progressing very well! : ) The newest build is the January 4th version which is now available for donors for Win 32/64, Linux 32/64, and OSX 64 as usual. Here’s what is new to this build: Updates in Build 0104

100 Beautiful Free Textures - Smashing Magazine Use of texture in Web design is extremely common. Part of the reason textures are so useful to designers is the relative ease of the integrating one into a design if a high-quality textured image already exists, not to mention the endless possibilities . Fortunately, plenty of photographers and designers are willing to share their work with the rest of us so that we can use them in a number of different ways. In this post, we’ll look at 100 different textures in a wide variety of different categories. Of course, each image is linked to the source where it can be downloaded. Fluid Simulation for Dummies Fluid Simulation for Dummies In the spring and summer of 2005, I wrote my Master's thesis on high-performance real-time 3D fluid simulation and volumetric rendering. The basics of the fluid simulation that I used are straightforward, but I had a very difficult time understanding it. The available reference materials were all very good, but they were a bit too physics-y and math-y for me. Unable to find something geared towards somebody of my mindset, I'd like to write the page I wish I'd had a year ago. With that goal in mind, I'm going to show you how to do simple 3D fluid simulation, step-by-step, with as much emphasis on the actual programming as possible.