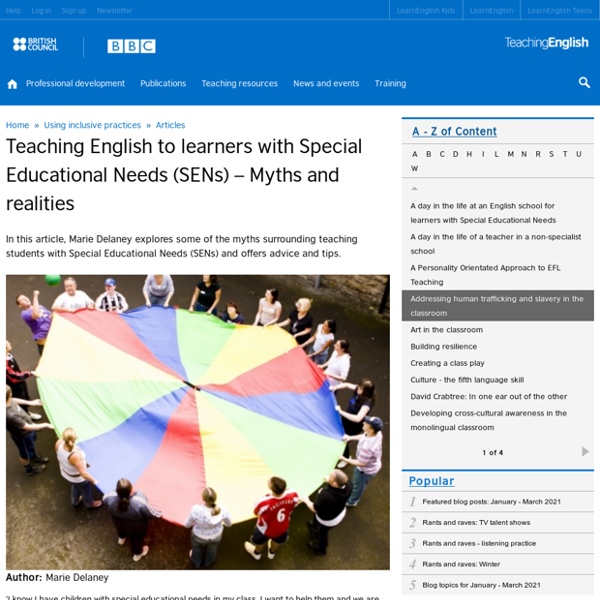 ‘I know I have children with special educational needs in my class, I want to help them and we are supposed to promote inclusion, but I really am not sure how to do this’ Vera, primary teacher from Spain ‘Some of the children in my class are really badly behaved, they can’t sit still, don’t finish their work and are always calling out. I think they might have a learning difficulty, but I don’t know what to do’ Kris, secondary teacher from Poland Do you feel like these teachers? Myth 1 – You have to be a specialist psychologist or specially trained teacher to know how to teach these learners No, you don’t. Myth 2 – other learners in the class make less progress when they are taught with learners with SENs No, this is not necessarily the case. Myth 3 – learners with SENs cannot learn languages No, this does not have to be true. Myth 4 – it takes a lot of extra time and planning No. Myth 5 – a teacher can’t ‘fix’ the learner’s problem so there is nothing I can do Definitely not true. 1. 2. 3. 4.

Schema and Fairies Schemas are one of those things that divide practitioners, like fairies at the bottom of the garden. You either believe in them and are in absolute awe at how amazing they are, or you just don’t believe they exist. It’s really interesting when you discuss this with people and it’s extra exciting when a ‘non-believer’ suddenly says “That describes my key child exactly!!”

Practical tips By Opal Dunn, educational consultant and author Introduction Young children learn English differently from most adults. Most have an innate ability to pick up English while taking part in activities, by making sense of what they are doing and picking up the adult’s language that accompanies the activity.

"I Said I Want the Red Bowl!" Responding to… Amelia, told that she can’t have a fifth book before bedtime, shouts: “You are the meanest mommy! You are not invited to my birthday party!” Derek, when offered a choice between carrots and cheese, not ice cream, before dinner announces: “I don’t like the choices you are choicing me!” Alex hurls a bowl of his favorite cereal off the table and screams, “I said the red bowl, not the blue bowl!”

Does my toddler have a short attention span because she won’t sit still for a story? A: It is perfectly normal for toddlers to not sit still very long—period. Most don’t like to stay in one place for long now that they can explore in so many new ways—by running, jumping, and climbing. So, an adult’s idea of snuggling on the couch to hear a story may not be the same idea a toddler has for story-time. You may only be able to read or talk about a few pages in a book at a time.

How can parents and teachers best educate young children? What principles can both teachers and parents bring to the education of very young children? Gillian Craig, who was part of the Learning Time with Shaun and Timmy writing team, explains. As teachers and parents, we follow certain principles in our roles. Often though, these principles overlap and all we need to do is recognise and reinforce these areas. Ask (the right) questions Deconstructing Role Play – Provide the Resources, Step Back and Watch Children’s Learning Flourish Hospital, vet’s surgery, post office, travel agent – themed role play areas are often seen as a must for an early years setting. They are often meticulously prepared to be aesthetically pleasing, covered in laminated words and pictures with the aim of enticing children in. But this is where I encountered a problem: in these areas, children are expected to come together to play out adult scenarios that are consistent with these themes.

How to help your child learn English with YouTube videos Tracey Chapelton, education consultant and materials writer, has some advice for parents of young English learners, whose home language might not be English. To learn a language we need a lot of exposure to it. YouTube is beneficial if you are not a fluent English speaker, and want a more fluent model of English for your child. Helped along by the visuals of their favourite cartoon, children can watch their favourite characters involved in adventures, while absorbing the language. Repetition is also important for language learning. The Power of Evening Routines The word “structure” can evoke less than positive associations. It suggests constraints, which are never a good thing, right? Wrong. It turns out that everyone benefits from a certain amount of daily structure, so long as that structure is pleasant, productive, and meaningful.

Moodle What do we make of a boy like Thomas? Thomas (his middle name) is a fifth-grader at the highly competitive P.S. 334, the Anderson School on West 84th. Slim as they get, Thomas recently had his long sandy-blond hair cut short to look like the new James Bond (he took a photo of Daniel Craig to the barber). MIT Brain Study: Back-And-Forth Talk Key To Developing Kids' Verbal Skills New MIT research finds that for children's brain development, parents don't just need to talk to their kids — it's important to talk with them, in back-and-forth exchanges. "What we found is, the more often parents engaged in back-and-forth conversation with their child, the stronger was the brain response in the front of the brain to language," said cognitive neuroscience professor John Gabrieli. Story continues below Most Viewed Stories That stronger brain response, measured as children ages 4 to 6 lay in a scanner listening to simple stories, reflects a deeper, more intimate engagement with language, said graduate student Rachel Romeo.