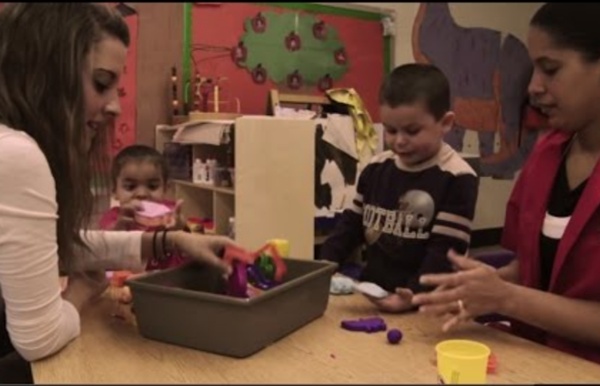 How can parents and teachers best educate young children? What principles can both teachers and parents bring to the education of very young children? Gillian Craig, who was part of the Learning Time with Shaun and Timmy writing team, explains. As teachers and parents, we follow certain principles in our roles. Often though, these principles overlap and all we need to do is recognise and reinforce these areas. Practical tips By Opal Dunn, educational consultant and author Introduction Young children learn English differently from most adults. MIT Brain Study: Back-And-Forth Talk Key To Developing Kids' Verbal Skills New MIT research finds that for children's brain development, parents don't just need to talk to their kids — it's important to talk with them, in back-and-forth exchanges. "What we found is, the more often parents engaged in back-and-forth conversation with their child, the stronger was the brain response in the front of the brain to language," said cognitive neuroscience professor John Gabrieli. Story continues below Most Viewed Stories

5 Examples of Onomatopoeia The word onomatopoeia comes from the combination of two Greek words, one meaning "name" and the other meaning "I make," so onomatopoeia literally means "the name (or sound) I make." That is to say that the word means nothing more than the sound it makes. "Boing," for example, means nothing more than what it sounds like. It is simply a sound effect, but one that is very useful in making writing more expressive and vivid. FAQ: Raising Bilingual Children Why want bilingual children? There are many reasons, but the two most common are: 1) The parents speak different languages (say, an American woman and a Turkish man). How to teach children English using illustrated storybooks What makes illustrated storybooks such a good resource for teaching young learners of English? The British Council’s Gail Ellis, co-author of a storytelling handbook for primary English language teachers, explains. Listen to an interview with Gail in our podcast and register for her webinar taking place on Thursday, 2 October.

The Power (and Peril) of Praising Your Kids What do we make of a boy like Thomas? Thomas (his middle name) is a fifth-grader at the highly competitive P.S. 334, the Anderson School on West 84th. Slim as they get, Thomas recently had his long sandy-blond hair cut short to look like the new James Bond (he took a photo of Daniel Craig to the barber). Unlike Bond, he prefers a uniform of cargo pants and a T-shirt emblazoned with a photo of one of his heroes: Frank Zappa. Thomas hangs out with five friends from the Anderson School. Moodle Child Dev. Author manuscript; available in PMC 2013 Sep 1. Published in final edited form as: Meredith L.

Ten ways to support your child’s English-learning at home As the British Council opens a new Learning Time with Shaun & Timmy centre in Mexico for two- to six-year-olds, senior teacher Sarah Reid offers some useful tips for supporting your child’s learning at home. More and more parents want their children to learn English from a young age. I often meet parents of children as young as two or three who say that proficiency in speaking English will help their child 'get ahead in a globalised world'.

Teaching English to learners with Special Educational Needs (SENs) – Myths and realities ‘I know I have children with special educational needs in my class, I want to help them and we are supposed to promote inclusion, but I really am not sure how to do this’ Vera, primary teacher from Spain ‘Some of the children in my class are really badly behaved, they can’t sit still, don’t finish their work and are always calling out.

Whole Child Development Is Undervalued The question is how to make such an approach both systemic and sustainable. Whole Person Socio-emotional, physical, creative, and cognitive capacities are deeply intertwined and equally important in ensuring a child's wellbeing, learning, and growth.