An Autobiography: The Story of My Experiments with Truth, by Mohandas K. Gandhi, 1925; ed. by Mahadev Desai, 1940 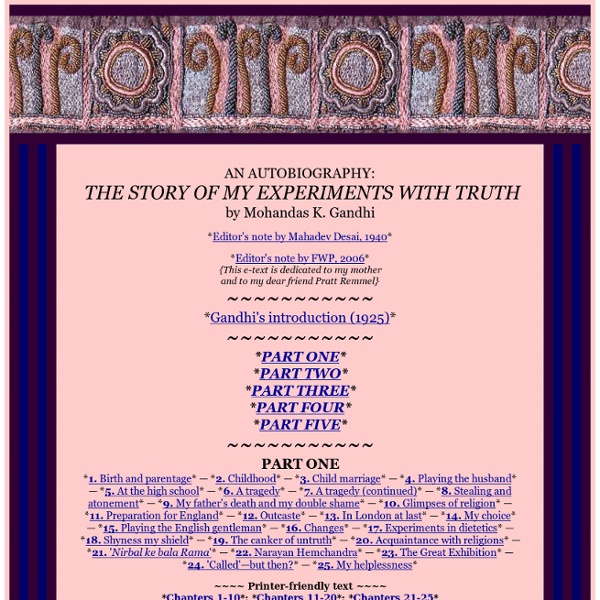 Truth  Philosophers are interested in a constellation of issues involving the concept of truth. A preliminary issue, although somewhat subsidiary, is to decide what sorts of things can be true. Is truth a property of sentences (which are linguistic entities in some language or other), or is truth a property of propositions (nonlinguistic, abstract and timeless entities)? The principal issue is: What is truth? Can claims about the future be true now? Table of Contents 1. The principal problem is to offer a viable theory as to what truth itself consists in, or, to put it another way, “What is the nature of truth?” This philosophical problem of truth has been with us for a long time. The three most widely accepted contemporary theories of truth are [i] the Correspondence Theory ; [ii] the Semantic Theory of Tarski and Davidson; and [iii] the Deflationary Theory of Frege and Ramsey. 2. The term “truth-value” has been coined by logicians as a generic term for “truth or falsehood”. a. b. c. d.

Why I Write - Essay by George Orwell Why I Write by George OrwellGangrel, [No. 4, Summer] 1946 From a very early age, perhaps the age of five or six, I knew that when I grew up I should be a writer. Between the ages of about seventeen and twenty-four I tried to abandon this idea, but I did so with the consciousness that I was outraging my true nature and that sooner or later I should have to settle down and write books. I was the middle child of three, but there was a gap of five years on either side, and I barely saw my father before I was eight. However, throughout this time I did in a sense engage in literary activities. When I was about sixteen I suddenly discovered the joy of mere words, i.e. the sounds and associations of words. So hee with difficulty and labour hard Moved on: with difficulty and labour hee. which do not now seem to me so very wonderful, sent shivers down my backbone; and the spelling 'hee' for 'he' was an added pleasure. (i) Sheer egoism. (ii) Aesthetic enthusiasm. (iii) Historical impulse.

Scary Paranormal Stories » Locations & Sites Rating: 8.1/10 (263 votes cast) 1. It is the year 2037. Yeah, okay. Alright, I’m sorry for being so unclear about what happened exactly. Even though I like my work, my cat and my lifestyle, I haven’t felt at ease in my home for the past months. Perhaps you’re wondering what exactly happened to Jimmy? 25 years ago, while I was browsing the internet looking for some interesting things to write about, I stumbled upon a story about a house that had been empty for 135 years, but was never torn down. I questioned several archive workers, but none of them were able to tell me something I didn’t already know about the house. Jimmy was always up for some fun. 2. Jimmy’s facial expression changed. ‘Alright man, let’s do it! We drove to the building and after we arrived we immediately got out of the car. I took the photos of the house out of my pocket and held one of them next to the house to compare. Jimmy leaned in to take a look for himself. ‘Come on, let’s enter.’ 3. ‘You two are reporters? 4.

What is Occam's Razor? [Physics FAQ] - [Copyright] Updated 1997 by Sugihara Hiroshi. Original by Phil Gibbs 1996. Occam's (or Ockham's) razor is a principle attributed to the 14th century logician and Franciscan friar William of Ockham. Ockham was the village in the English county of Surrey where he was born. The principle states that "Entities should not be multiplied unnecessarily." "Pluralitas non est ponenda sine neccesitate" "Frustra fit per plura quod potest fieri per pauciora" "Entia non sunt multiplicanda praeter necessitatem" In fact, only the first two of these forms appear in his surviving works and the third was written by a later scholar. Many scientists have adopted or reinvented Occam's Razor, as in Leibniz's "identity of observables" and Isaac Newton stated the rule: "We are to admit no more causes of natural things than such as are both true and sufficient to explain their appearances." In physics we use the razor to shave away metaphysical concepts. References: W. W.

Random Blog Posts "When you really want to see beyond the matter, seek to view the vibration that arises from the matter for it's only then that you will truly understand that the matter really doesn't exist, the matter doesn't really matter" Catrima Gabrielle "Those who give, receive. Those who take, are taken from. When you give something to someone, you also give it to yourself. What you're expressing to others you're also expressing towards yourself. (click to see entire quote) "Those who give, receive. some thoughts... "If you have a pessimistic view of the world you are not enlightened you are lazy" J. "I don't believe that death is the intermission of life, but that life is the intermission of something greater." Carlos Daniel Vásquez The Life-Giving Thing Priorities ‘I am one with Everything’ – Beautiful Indian Guy In the Desert… On LSD "If you want to achieve greatness, stop asking for permission." Unknown- Street Art Sheep Kent Sayre Kent Sayre — The Only Thing That Stops Us Theory of Absolute Infinity ∞ Ray

Do Not Stand at My Grave and Weep Do Not Stand at My Grave and Weep is a poem written in 1932 by Mary Elizabeth Frye. Although the origin of the poem was disputed until later in her life, Mary Frye's authorship was confirmed in 1998 after research by Abigail Van Buren, a newspaper columnist.[1] Full text[edit] Do not stand at my grave and weep, I am not there; I do not sleep. I am a thousand winds that blow, I am the diamond glints on the snow, I am the sunlight on ripened grain, I am the gentle autumn rain. When you awaken in the morning’s hush I am the swift uplifting rush Of quiet birds in circled flight. I am the soft stars that shine at night. Do not stand at my grave and cry, I am not there; I did not die. Origins[edit] Mary Frye, who was living in Baltimore at the time, wrote the poem in 1932. Mary Frye circulated the poem privately, never publishing or copyrighting it. The poem was introduced to many in Britain when it was read by the father of a soldier killed by a bomb in Northern Ireland. BBC poll[edit] ... Rocky J.

Neurotic Poets - Neurotic Poets - The Link Between Creativity And Madness NationStates | create your own country Literature Project - Free eBooks Online Game Theory First published Sat Jan 25, 1997; substantive revision Wed May 5, 2010 Game theory is the study of the ways in which strategic interactions among economic agents produce outcomes with respect to the preferences (or utilities) of those agents, where the outcomes in question might have been intended by none of the agents. The meaning of this statement will not be clear to the non-expert until each of the italicized words and phrases has been explained and featured in some examples. Doing this will be the main business of this article. First, however, we provide some historical and philosophical context in order to motivate the reader for the technical work ahead. 1. The mathematical theory of games was invented by John von Neumann and Oskar Morgenstern (1944). Despite the fact that game theory has been rendered mathematically and logically systematic only since 1944, game-theoretic insights can be found among commentators going back to ancient times. 2. 2.1 Utility

Online Speed Reading tools and software Simply start by clicking on the Play button on the left. Reading is that one activity that we do every day but we don't really practice. Most people learn the basics of reading in kindergarten and never graduate to the next levels. You are probably using the same basic rudimental tools and techniques that you learned when you were 6. The average American person reads at an average speed of 180 to 240 words per minute and has done so since he was 16 years old. Does it make sense that we hit our best performance at age 16 and that we don't improve much after that? Keep in mind less than 10% read at 400 words per minute and less than 1% faster than 600. Have you ever wished you could take one of those costly speed reading courses? The problem with those courses is that you have to keep practicing those techniques until they become second nature. That's the goal of this site. We are here to keep you focused and to help you improve your speed reading everyday. What is sub-vocalization?