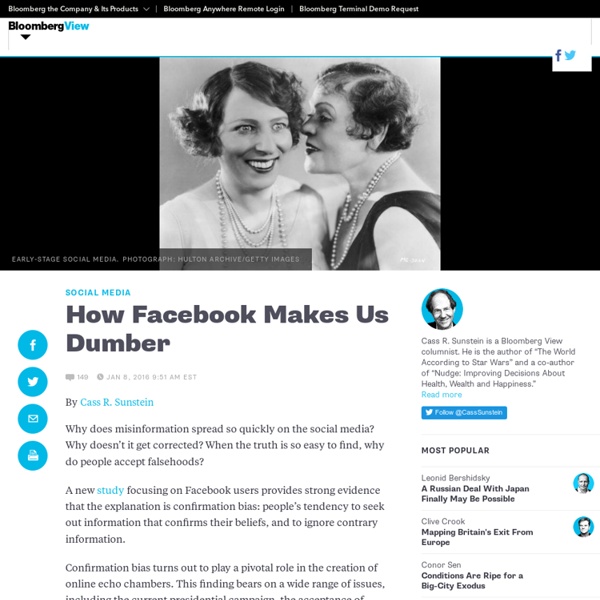 Why does misinformation spread so quickly on the social media? Why doesn’t it get corrected? When the truth is so easy to find, why do people accept falsehoods? A new study focusing on Facebook users provides strong evidence that the explanation is confirmation bias: people’s tendency to seek out information that confirms their beliefs, and to ignore contrary information. Confirmation bias turns out to play a pivotal role in the creation of online echo chambers. This finding bears on a wide range of issues, including the current presidential campaign, the acceptance of conspiracy theories and competing positions in international disputes. The new study, led by Michela Del Vicario of Italy’s Laboratory of Computational Social Science, explores the behavior of Facebook users from 2010 to 2014. In sum, the researchers find a lot of communities of like-minded people. The consequence is the “proliferation of biased narratives fomented by unsubstantiated rumors, mistrust, and paranoia.”

Why Intelligent People Can't find Happiness - The Minds Journal “Happiness in intelligent people is the rarest thing I know.”-Ernest Hemingway The presence of a faithful and loving partner, a great family life and a successful career may not be enough to prevent an intelligent soul to feel grief and melancholy. How We Grieve: Meghan O’Rourke on the Messiness of Mourning and Learning to Live with Loss John Updike wrote in his memoir, “Each day, we wake slightly altered, and the person we were yesterday is dead. So why, one could say, be afraid of death, when death comes all the time?” And yet even if we were to somehow make peace with our own mortality, a primal and soul-shattering fear rips through whenever we think about losing those we love most dearly — a fear that metastasizes into all-consuming grief when loss does come.

The Assault on Empathy One morning this past November, with my daughter about to visit and holiday gifts on my mind, I opened my MIT mail and found an intriguing “call for subjects.” It described a research project that promised to use conversation with sociable robots, some of them designed to be children’s playthings (and indeed, marketed as holiday gifts), as a step towards “eliciting empathy.” There it was in black and white, the thing that has been unfolding for decades: The robot presented as empathy machine—an object that presents itself as worthy of your empathic response, and as having an empathic reaction to you.

Co-living's a Growing Trend - Not just among Millennials A 21st-century version of dormitory living for adults is emerging as a way for city dwellers to deal with expensive real estate, social isolation and environmental pressures. It's billed as co-living – the residential equivalent to co-working spaces – though there are parallels to older concepts such as boarding houses or university accommodation. In the past six months co-living spaces have opened up in Stanmore and Newtown, with Paddington coming within weeks, and Glebe and Randwick slated for 2020. Rebecca Dracup, an environmental engineer at Stantec-owned Wood and Grieve Engineers, said co-living was a growing trend around the world.

The Cure for Toxic Positivity When my dad was diagnosed with colon cancer at age 52, I was flooded with emails, calls, and in-person pep talks from friends and acquaintances. Anyone who’d ever met me, it seemed, was eager to offer up a platitude. “Think positive,” they told me. “It will be okay. He’ll get through this.”

How to Answer Tricky Interview Questions Are you smarter than an interviewer? If you prepare properly, you will be. During a job interview, employers sometimes ask tricky questions to trip you up — not out of maliciousness, but to get an accurate sense of your candidacy. Interviewers know that you've probably practiced all of the traditional questions, so they try to stump you with trickier ones to get a better idea of your background, your communication skills, and how you'll perform should they offer you the job. Do keep in mind that there may not be a right or wrong answer for some of these questions. The interviewer will be more interested in how you respond than what your answer is.

Top 10 skills all hospitality employees have Top 10 skills all hospitality employees have Working within the hospitality industry can be extremely rewarding. Not only do you help customers on a daily basis, there are ample opportunities for career progression. Having said that, every career path obviously has its ups and downs. Social Exchange Theory Explanations > Theories > Social Exchange Theory Description | Research | Example | So What? | See also | References Description All relationships have give and take, although the balance of this exchange is not always equal.

How feelings took over the world On a late Friday afternoon in November last year, police were called to London’s Oxford Circus for reasons described as “terror-related”. Oxford Circus underground station was evacuated, producing a crush of people as they made for the exits. Reports circulated of shots being fired, and photos and video appeared online of crowds fleeing the area, with heavily armed police officers heading in the opposite direction. Amid the panic, it was unclear where exactly the threat was emanating from, or whether there might be a number of attacks going on simultaneously, as had occurred in Paris two years earlier.

The Root of All Cruelty? The philosopher David Livingstone Smith, commenting on this episode on social media, wondered whether its writer had read his book “Less Than Human: Why We Demean, Enslave, and Exterminate Others” (St. Martin’s). It’s a thoughtful and exhaustive exploration of human cruelty, and the episode perfectly captures its core idea: that acts such as genocide happen when one fails to appreciate the humanity of others. One focus of Smith’s book is the attitudes of slave owners; the seventeenth-century missionary Morgan Godwyn observed that they believed the Negroes, “though in their Figure they carry some resemblances of Manhood, yet are indeed no Men” but, rather, “Creatures destitute of Souls, to be ranked among Brute Beasts, and treated accordingly.” Then there’s the Holocaust.

We don’t want billionaires’ charity. We want them to pay their taxes “Charity is a cold, grey loveless thing. If a rich man wants to help the poor, he should pay his taxes gladly, not dole out money at a whim.” It is a phrase commonly ascribed to Clement Attlee – the credit actually belongs to his biographer, Francis Beckett – but it elegantly sums up the case for progressive taxation. According to a report by the Swiss bank UBS, last year billionaires made more money than any other point in the history of human civilisation. Their wealth jumped by a fifth – a staggering $8.9tn – and 179 new billionaires joined an exclusive cabal of 2,158. "On My Block" and "In the Long Run" give working-class people the loving portraits they deserve In 1936, George Orwell gave up his part-time job as a bookshop assistant in London and headed north on a fact-finding mission. His subject? The English working class.

What do incels, fascists and terrorists have in common? Violent misogyny The apparent connection of recent murders in Toronto to the “incel” movement has led to a torrent of commentary. Too much of it has appeared to rationalise Alek Minassian’s actions. Just yesterday, New York Times columnist Ross Douthat made their major gripe – that the world denies them sex – into the basis of a kind of seminar room thought experiment, wondering whether a redistribution of sex might not be “entirely responsive to the logic of late-modern sexual life”.

Related:
Related:  Disinformation   -  Socio.Logical   -  The Straight Dope – Fighting ignorance since 1973. (It's taking longer than we thought.)   -  List of common misconceptions - Wikipedia, the free encyclopedia   -  Top 10 Strange Phenomena of the Mind - Listverse   -  The 12 cognitive biases that prevent you from being rational   -  EWU | 15 Styles of Distorted Thinking   -  Frontier of Physics: Interactive Map   -  The Evolutionary Argument Against Reality   -  The end of capitalism has begun | Books   -  How technology disrupted the truth | Katharine Viner | Media