GREEN MAGIC HOMES - The most beautiful Green Homes ever. 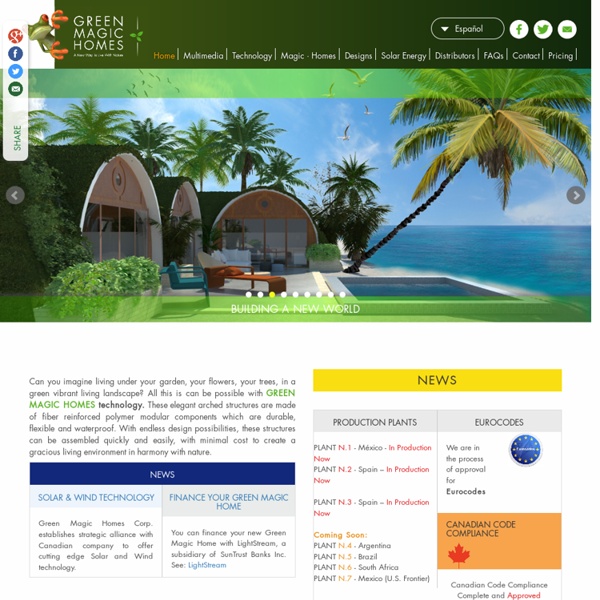 Can you imagine living under your garden, your flowers, your trees, in a green vibrant living landscape? All this is can be possible with GREEN MAGIC HOMES technology. These elegant arched structures are made of fiber reinforced polymer modular components which are durable, flexible and waterproof. With endless design possibilities, these structures can be assembled quickly and easily, with minimal cost to create a gracious living environment in harmony with nature. Green Magic Homes Corp. establishes strategic alliance with Canadian company to offer cutting edge Solar and Wind technology. You can finance your new Green Magic Home with LightStream, a subsidiary of SunTrust Banks Inc. PLANT N.1 - México - In Production Now PLANT N.2 - Spain – In Production Now PLANT N.3 - Spain – In Production Now Coming Soon: PLANT N.4 - Argentina PLANT N.5 - Brazil PLANT N.6 - South Africa PLANT N.7 - Mexico (U.S. We are in the process of approval for Eurocodes

Going Green Underground: Eco-Retro Earth House Designs They may look a bit dated at first, or at least more whimsical than required for functional living. Still, these earth houses have more to offer than custom curves and a unique aesthetic – including a set of design philosophies, strategies and tactics that are far from just superficial nods to sustainable trends. The designs take everything into account from fire and earthquake protection to integral insulation-efficient arches and buffer rooms for energy-free temperature control. While not every Erdhaus is actually built under the existing ground on a site, they are all tied to their earthen surroundings by sloping sheaths of greenery. Grass-covered walls curve up and continue as green roofs along the tops of each structure.

EcoPods - EcoPods High Wickham 2010 This EcoPod was for use as an office and garden room. The garden had its own river at the bottom and was a very beautiful setting. The EcoPod was built for small Pilates group. As with all our EcoPods it was heavily insulated with a wall, floor and roof thickness of 200mm which means it will be very toasty, even in the winter. It was clad in Western Red Cedar with a butyl roof covering. Everything I ever knew or said about green sustainable design was probably wrong The drawing above, or some version of it, has been part of every sustainable design class since about 1970: have lots of south facing windows carefully shaded by properly designed overhangs, with the winter sun heating up that thermal mass of the floor. Frank Lloyd Wright did it; I did it; everybody did it. But what if we were all wrong? Over at Green Building Advisor, Martin Holladay looks at what was almost a religious doctrine and questions its tenets, writing:

Here's the dirt on a prefabricated plastic earth sheltered home design you can buy off the shelf No, this isn't Hobbiton or a scene from Teletubbies. It's a rendering of a community of earth-sheltered houses built from a new prefab building system. I once wrote that from Hobbiton to Tatooine, earth sheltered houses make sense all over the universe; now you can just order one up. Earth-sheltered houses have long been known to be very energy-efficient, with the thermal mass of all that dirt keeping the temperature relatively even all year.

Looking for a new house? Eco-friendly underground home on the market in Md. posted Categories: Homes / Dwellings FOX 29 News Philadelphia | WTXF-TV If you're looking for a new place to live, this home on the market in Prince George's County in Maryland will probably give you a double take after you look at it. What makes it stand out is that the home is partially underground. How easy is it to start your own microbrewery? Many men are turning such imaginings into liquid reality. The Society of Independent Brewers (SIBA) was established in 1980 by a group of 20 microbrewers; it now has 786 members. Last year, 62 new breweries joined. Volume sales are growing exponentially, and the variety is astounding: SIBA stats for 2013 list 4,000 permanent cask ales – a 25% increase on the 2012 figure – as well as 5,800 seasonals and specials. But, how were these breweries and their beers born?