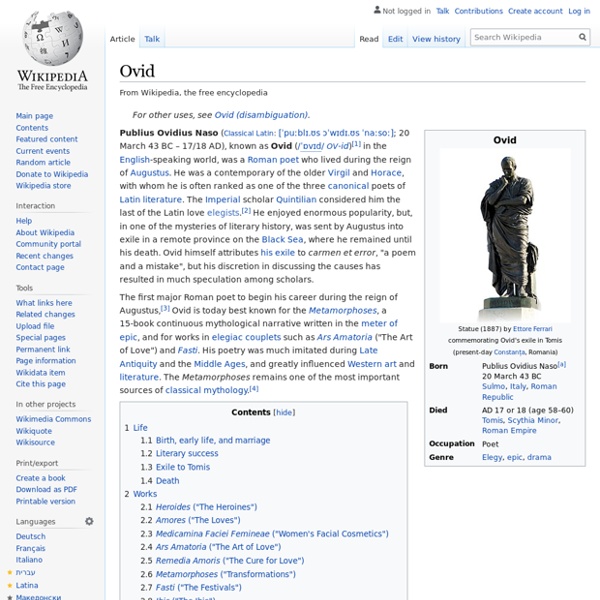 Life[edit] Ovid talks more about his own life than most other Roman poets. Information about his biography is drawn primarily from his poetry, especially Tristia 4.10, which gives a long autobiographical account of his life. Other sources include Seneca the Elder and Quintilian. Birth, early life, and marriage[edit] His father wanted him to study rhetoric toward the practice of law. Ovid's first recitation has been dated to around 25 BC, when he was eighteen.[11] He was part of the circle centered on the patron Marcus Valerius Messalla Corvinus, and seems to have been a friend of poets in the circle of Maecenas. He married three times and divorced twice by the time he was thirty years old. Literary success[edit] The first 25 years of Ovid's literary career were spent primarily writing poetry in elegiac meter with erotic themes.[14] The chronology of these early works is not secure; tentative dates, however, have been established by scholars. Exile to Tomis[edit] In 1923, scholar J. [edit]

Virgil 1st-century BC Roman poet Virgil is traditionally ranked as one of Rome's greatest poets. His Aeneid has been considered the national epic of ancient Rome since the time of its composition. Modeled after Homer's Iliad and Odyssey, the Aeneid follows the Trojan refugee Aeneas as he struggles to fulfill his destiny and reach Italy, where his descendants Romulus and Remus were to found the city of Rome. Virgil's work has had wide and deep influence on Western literature, most notably Dante's Divine Comedy, in which Virgil appears as Dante's guide through Hell and Purgatory.[4] Life and works[edit]

Quintus Fabius Pictor Life[edit] Q. Fabius Pictor led Roman forces against the Gauls in 225 BC. In 216 BC, during the Second Punic War, he was appointed to travel to the oracle at Delphi in Greece to seek guidance after the disastrous Roman defeat to Hannibal at Cannae. Work[edit] Fabius wrote a history of Rome in Greek; it has not survived but is partially known through quotations and allusions in later authors. www.britannica Publius Ovidius Naso was, like most Roman men of letters, a provincial. He was born at Sulmo, a small town about 90 miles (140 km) east of Rome. The main events of his life are described in an autobiographical poem in the Tristia (Sorrows). His family was old and respectable, and sufficiently well-to-do for his father to be able to send him and his elder brother to Rome to be educated.

Roman Republic Period of ancient Roman civilization (509–27 BC) The Roman Republic (Latin: Rēs pūblica Rōmāna, Classical Latin: [ˈreːs ˈpuːblɪka roːˈmaːna]) was the era of classical Roman civilization beginning with the overthrow of the Roman Kingdom, traditionally dated to 509 BC, and ending in 27 BC with the establishment of the Roman Empire. It was during this period that Rome's control expanded from the city's immediate surroundings to hegemony over the entire Mediterranean world. Roman society under the Republic was a cultural mix of Latin, Etruscan, and Greek elements, which is especially visible in the Roman Pantheon.

Gauls Group of Celtic peoples of Western Europe The Gauls (Latin: Galli, Ancient Greek: Γαλάται, Galátai) were a group of Celtic peoples of Continental Europe in the Iron Age and the Roman period (roughly from the 5th century BC to the 5th century AD). The area they originally inhabited was known as Gaul. Their Gaulish language forms the main branch of the Continental Celtic languages. The Gauls emerged around the 5th century BC as the bearers of the La Tène culture north of the Alps (spread across the lands between the Seine, Middle Rhine and upper Elbe).

rome_ovid_metamorphoses Introduction | Synopsis | Analysis | Resources “Metamorophoses” (“Transformations”) is a narrative poem in fifteen books by the Roman poet Ovid, completed in 8 CE. It is an epic (or “mock-epic”) poem describing the creation and history of the world, incorporating many of the best known and loved stories from Greek mythology, although centring more on mortal characters than on heroes or the gods. Each story contains some sort of transformation (or metamorphosis) as the link that ties them all together. It has remained one of the most popular works of mythology, and was perhaps the classical work best known to medieval writers and strongly influenced medieval and Renaissance poetry.

Late Middle Ages Period of European history between 1250 and 1500 CE From the Apocalypse in a Biblia Pauperum illuminated at Erfurt around the time of the Great Famine. Death sits astride a lion whose long tail ends in a ball of flame (Hell). Famine points to her hungry mouth. The Late Middle Ages or Late Medieval Period was the period of European history lasting from 1250 to 1500 AD. Barcids Background[edit] During the 3rd century BC, the Barcids comprised one of the leading families in the ruling oligarchy of Carthage. Realizing that the expansion of the Roman Republic into the Mediterranean Sea threatened the mercantile power of Carthage, they fought in the First Punic War (264–241 BC) and prepared themselves for the Second Punic War (218–201 BC). The Barcids founded several Carthaginian cities in the Iberian peninsula, some of which still exist today. Note for example Mahón and Qart Hadast (more famous under the Latin translation of its name: "Carthago Nova" or New Carthage) which currently bears the name of Cartagena in modern-day Spain. The name is also commonly given as an etymology for Barcelona.

en.m.wikipedia Life[edit] Family background[edit] Birth and career[edit] Latin poetry We ask you, humbly, to help. Hi, reader in Canada, sorry for the interruption and it's a little awkward to ask, but this Tuesday Wikipedia really needs you. Time is running out in 2019 to help us. Carthage archaeological site in Tunisia Carthage was the center or capital city of the ancient Carthaginian civilization, on the eastern side of the Lake of Tunis in what is now the Tunis Governorate in Tunisia. Carthage was widely considered the most important trading hub of the Ancient Mediterranean and was arguably one of the most affluent cities of the Ancient World. Name[edit] The name Carthage is the Early Modern anglicisation of Middle French Carthage /kar.taʒ/,[8] from Latin Carthāgō and Karthāgō (cf. Greek Karkhēdōn (Καρχηδών) and Etruscan *Carθaza) from the Punic qrt-ḥdšt (𐤒𐤓𐤕 𐤇𐤃𐤔𐤕‎) "new city",[9] implying it was a "new Tyre".[10] The Latin adjective pūnicus, meaning "Phoenician", is reflected in English in some borrowings from Latin—notably the Punic Wars and the Punic language.

en.m.wikipedia Dares Phrygius (Ancient Greek: Δάρης), according to Homer,[1] was a Trojan priest of Hephaestus. He was supposed to have been the author of an account of the destruction of Troy, and to have lived before Homer.[2] A work in Latin, purporting to be a translation of this, and entitled Daretis Phrygii de excidio Trojae historia, was much read in the Middle Ages, and was then ascribed to Cornelius Nepos, who is made to dedicate it to Sallust; but the language better fits a period much later than the time of Nepos (probably the 5th century AD). It is doubtful whether the existing work is an abridgment of a larger Latin work or an adaptation of a Greek original. Equestrian The word equestrian is a reference to horseback riding, derived from Latin equester and equus, "horse". Horseback riding[edit] Notable examples of this are: