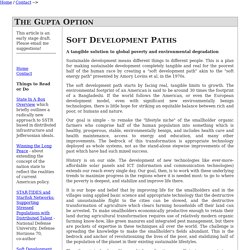 This is a plan for making sustainable development completely tangible and real for the poorest half of the human race by creating a "soft development path" akin to the "soft energy path" presented by Amory Lovins et al. in the 1970s. The soft development path starts by facing real, tangible limits to growth. The environmental footprint of an American is said to be around 30 times the footprint of a Bangladeshi. If the world follows the American, or even the European development model, even with significant new environmentally benign technologies, there is little hope for striking an equitable balance between rich and poor, or humans and nature. History is on our side. Then there is technology. The poor cannot follow the development path that the current rich have taken without destroying the planet.

We need your help to make that step real. Who Are Indigenous Peoples. According to the United Nations, there are approximately 400 million Indigenous people worldwide, making up more than 5,000 distinct tribes. 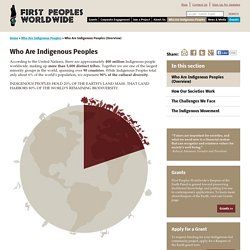 Together we are one of the largest minority groups in the world, spanning over 90 countries. While Indigenous Peoples total only about 6% of the world’s population, we represent 90% of the cultural diversity. DEFINING INDIGENOUS PEOPLES There is no rigid definition of what makes a group Indigenous, but the United Nations and the International Labour Organization have outlined a few characteristics that usually define an Indigenous group: ● We are descended from the pre-colonial/pre-invasion inhabitants of our region. ● We maintain a close tie to our land in both our cultural and economic practices. ● We suffer from economic and political marginalization as a minority group. ● A group is considered Indigenous if it defines itself that way.

An Indigenous Led Organization. The Institute for Collapsonomics. Resilience Maps - Simple Critical Infrastructure Maps. Appropedia. Free science and engineering in the global public interest. A follow up to my bitcoin magazine interview on natural monopolies, cartels and power law distribution of wealth. 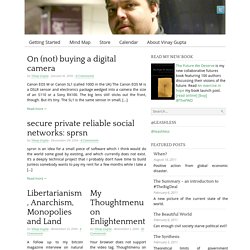 Nothing special is required to constitute the State within strict libertarian thinking. It is simply a monopoly landowner: that is the _definition_ of the State if we are honest. You do not like this, but it is [...] Read more → Your browser does not support the video tag. Read more → Maker / Culture Wednesday 17th of September, 2014 at @MakersCAFE London TICKETS NOW AVAILABLE ON EVENTBRITE Examining the fertile borders where the Makers touch the world The team that brought you TRUTHANDBEAUTY at Hub Westminster and Big Picture Days at Limewharf is delighted to present a new event at MakersCAFE, a new fabrication venue in [...]

Microclimate. Pachamama. Russell means for america to live europe must die. The Ethics of Working in a Foreign Culture. Timeline of Tribal Engagement in Protection. To Change Everything 1up. To Change Everything 2up. Ii. Foreword by Charles Eisenstein. FOREWORD by Charles Eisenstein Going into my first conversation with Mark Boyle a year ago, I was feeling a little bit defensive. 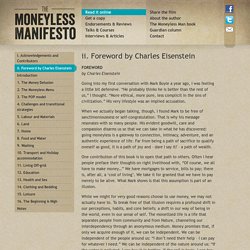 “He probably thinks he is better than the rest of us,” I thought. “More ethical, more pure, less complicit in the sins of civilization.” His very lifestyle was an implied accusation. When we actually began talking, though, I found Mark to be free of sanctimoniousness or self-congratulation. One contribution of this book is to open that path to others. While we might for very good reasons choose to use money, we may not actually have to. Here, then, is another illusion: we cannot actually achieve independence via money. Mark Boyle offers us one way to do this.

None of this means that living moneyless is the only way to enter the spirit of the gift. What about the collective level? That is why I believe Mark’s work has a significance beyond merely describing a more joyful, connected way of living.