The 100 Most Common Irregular Plural Nouns in English. Most English nouns form their plural by adding either -s (books, bands, bells) or -es (boxes, bunches, batches). 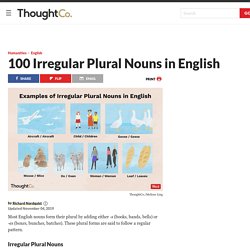 These plural forms are said to follow a regular pattern. Irregular Plural Nouns "The Penguin Writer's Manual" "There are no easy rules, unfortunately, for irregular plurals in English. Definition and Examples of Linguistic Mutation. In linguistics, mutation is a change in a vowel sound caused by a sound in the following syllable. 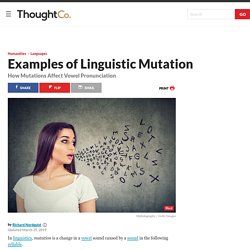 As discussed below, the most significant form of mutation in the history of English was the i-mutation (also known as front mutation). This system of changes occurred before the appearance of written Old English (probably in the sixth century) and no longer plays an important role in modern English. Real Vocabulary: Is 'data' singular or plural? 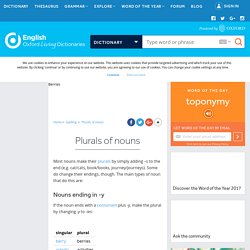 Some do change their endings, though. The main types of noun that do this are: Plural exercises - grammar. BEGCh6Singular&PluralNouns. Sing PluralRvw. FEGi Talking Heads. What Is the Plural of the Word "Data"? The word “data” shows up throughout statistics. 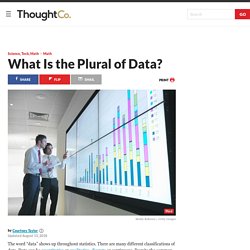 There are many different classifications of data. Data can be quantitative or qualitative, discrete or continuous. Despite the common use of the word data, it is frequently misused. The primary problem with the use of this term stems from a lack of knowledge about whether the word data is singular or plural. If data is a singular word, then what is the plural of data? It turns out that this occurs for a very interesting reason. A Little Bit of Latin We begin with the history of the word datum. What all this Latin grammar means is that the plural of datum is data. Data and Datum Although some treat the word data as a collective noun referring to a collection of information, most writing in statistics recognizes the origin of the word.

One way to dodge this issue is to consider all of the data as a set. Spot the Examples of Misuse A brief quiz may further help to sort out the correct way to use the term data. Grammar and Statistics. The Plural of Genus (And Other Irregular Plurals) A genus is a group of objects that have similar characteristics. 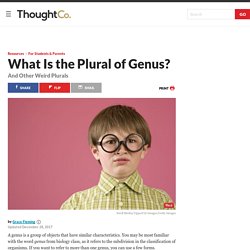 You may be most familiar with the word genus from biology class, as it refers to the subdivision in the classification of organisms. If you want to refer to more than one genus, you can use a few forms. Both genera and genuses are correct, although genera is best for academic writing. Note: You pronounce genera as JEN - er - uh. The 100 Most Common Irregular Plural Nouns in English. What Is the Plural of Virus? It is common knowledge that the plurals of many words from Latin end in "-a" or "-i. 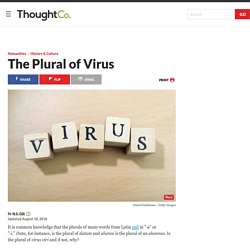 " Data, for instance, is the plural of datum and alumni is the plural of an alumnus. Is the plural of virus viri and if not, why? Neuter and Masculine Nouns ​Latin neuters end in "-a" in the plural for the nominative and accusative cases: Plural Nouns Forms. Nouns are words that indicate objects, things, places and people such as: computer, chair, beach, janitor, etc. 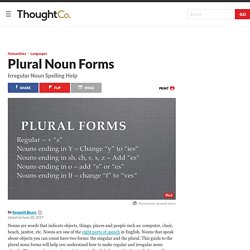 Nouns are one of the eight parts of speech in English. Nouns that speak about objects you can count have two forms: the singular and the plural. This guide to the plural noun forms will help you understand how to make regular and irregular noun plurals. Irregular Plural Nouns: Definitions and Examples. Although most count nouns in English have regular plurals, some nouns (such as sheep) don't have separate plural forms while others (such as woman and half) form the plural by changing an internal vowel (women) or consonant (halves). 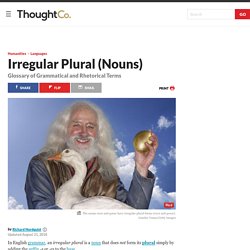 Examples and Observations "All around us on each side of the river were sheep, cattle, horses, wagons, men, women and children—more cattle and sheep than I ever saw before in my life: drove after drove, thousands, yes, tens of thousands. "(Rebecca Ketcham, quoted by Lillian Schlissel in Women's Diaries of the Westward Journey. Schocken Books, 1992)"Farmers trekked into town with their children and wives streaming around them. 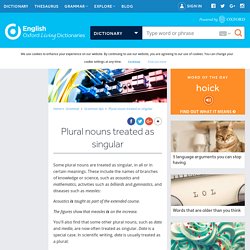 These include the names of branches of knowledge or science, such as acoustics and mathematics, activities such as billiards and gymnastics, and diseases such as measles: Acoustics is taught as part of the extended course. ‘Phenomenon’ or ‘phenomena’? The word phenomenon comes from Greek, and its plural form is phenomena, as in: These phenomena are not fully understood. 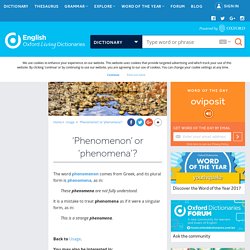 It is a mistake to treat phenomena as if it were a singular form, as in: This is a strange phenomena. Back toUsage. You may also be interested in: 'Amoral' or 'immoral'? 'Climactic' or 'climatic'? Hoofs or Hooves? Here's a question for you: When you hear reindeer clattering on your roof, are you hearing their hoofs (H-O-O-F-S) or their hooves (H-O-O-V-E-S)? Some Nouns Have Too Many Plurals - Copyediting.com. Forming regular plural nouns in English is a pretty simple concept, but that’s where the simplicity ends. English has so many different irregular plurals — and so many different types! There are plurals that are identical to their singular versions (sheep: sheep), plurals that change for count and noncount nouns (fish: fish, fishes), plurals that have held on to their Old English or Middle English endings (child: children), plurals that retain the endings from their source languages (criterion: criteria), a whole slew of words with multiple acceptable plurals (index: indexes, indices), and that barely scratches the surface of irregular nouns.

But there’s one subset of plurals that is rarely spoken of: homonyms (in the first sense mentioned here) that, for reasons of etymology, tradition, or convention, have nonhomonymous plurals — one regular, one irregular. Here are just five of them to consider. Datum And to confuse matters more, surveyors can use datums to collect data about an area. English plurals. English nouns are inflected for grammatical number, meaning that if they are of the countable type, they generally have different forms for singular and plural. Why is the plural of fish still fish and not fishes? Many English nouns have irregular plural forms. While the general rule says that adding -s or -es to a noun forms its plural, this is not always true. The following examples show some of the ways English nouns become plural.

For some nouns, like fish, there is no difference between the singular form and the plural form. Sometimes, however, people do use regular plural endings for irregular nouns, so in casual conversation you may hear fishes or elks. One fish; three fishA deer; many deerAn elk; some elkOne species; several speciesA series; many series Some English words come from Latin, and take a Latinate plural ending. A syllabus; all of the syllabiA larva; many larvaeThis genus; these generaHer thesis; their thesesOne crisis; two crisesAn index; a couple of indicesA matrix; two matrices Sometimes nouns end in -f or -fe and the f becomes a v before adding -s or -es. A loaf of bread; a few loaves of breadOne wolf; a pack of wolvesA knife; some knives I hope this helps. The Flatmates - Language Point 116. Fm_quiz_071023. The Flatmates - Language Point 116. Common Irregular Noun Plurals in English. Common Irregular Noun Plurals in English.

'Whereabouts': is it singular or plural? The whereabouts of conclusive advice about whether whereabouts is plural or singular has historically been elusive. We're here to correct that. These days it's more often than not plural: A warrant was issued, but his whereabouts were unknown. — The Barrie (Ontario) Examiner, 13 Mar. 2017 The use in that quote is typical, but such was not always the case.