Therapeutic targeting of liver inflammation and fibrosis by nanomedicine - Bartneck - Hepatobiliary Surgery and Nutrition. Liver biology, innovative drugs, and arising hope from nanomedicine The liver is the largest internal human organ weighing about 1.5 kg in an adult, with many essential roles in metabolism and clearance. 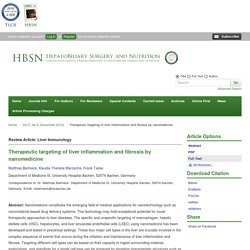 Bile acids are formed by the liver, which are of critical importance for the maintenance of cholesterol metabolism and intestinal lipid absorption. The capability of the liver to regenerate is remarkable, because it can even compensate a loss of 70% of the parenchyma by proliferation within several weeks (1). However, sustained injury promotes a characteristic wound healing response termed fibrosis, in which the tissue is encircled by deposited extracellular matrix (ECM) proteins and undergoes severe structural and functional alterations (2). Classifications of nanoparticles Therapeutic nanoparticles range from 1 to 100 nm (12), however, many carrier systems require larger sizes for drug release and thus frequently, the definition is being extended to the submicron scale (up to 500 nm).

Cadmium and Fullerenes in Liver Diseases. Dietary Interventions in Liver Disease. Remission of aggressive autoimmune disease (dermatomyositis) with removal of infective jaw pathology and ozone therapy: review and case report. Oral infection, including occult cavitations and endodontically treated teeth, may be key sources of bacterial seeding in the body that is routinely overlooked. 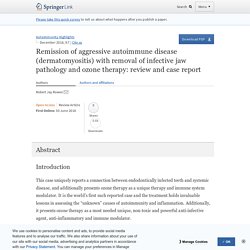 Weston Price, DDS, a renowned researcher of the last century, published his findings on the systemic risks of endodontic infections [9]. He found that he could transfer human diseases (from arthritis to carditis) to a rabbit by implanting a fragment of the sick person’s extracted endodontically treated tooth into the belly area of rabbits.

Anaerobic organisms were difficult to culture in his day. Transplanting the infected structure and observing ramifications were his means of demonstrating transmissible agent. Dr. This case also supports long held concerns about the systemic effects of oral infections. Additionally, German brothers, Huneke, described relationships between specific teeth and acupuncture meridians/organs, and joints to which they are related [18]. Ozone therapy has significant activity against microorganisms. Bioscience Horizons: The International Journal of Student Research. We use cookies to enhance your experience on our website.By continuing to use our website, you are agreeing to our use of cookies. 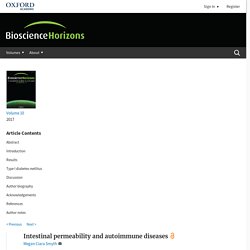 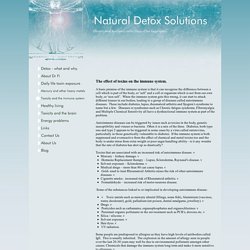 A basic premise of the immune system is that it can recognise the difference between a cell which is part of the body, or ‘self’ and a cell or organism which is not from our own body, or ‘non self’. When the immune system gets this wrong, it can start to attack different tissues in our bodies, leading to a group of diseases called autoimmune diseases. These include diabetes, lupus, rheumatoid arthritis and Sjogren’s syndrome to name but a few. Diseases or syndromes such as Chronic fatigue syndrome, Fibromyalgia and Multiple Chemical Sensitivity all have a dysfunctional immune system as part of the problem. Autoimmune diseases can be triggered by issues such as toxins in the body, genetic susceptibility and viruses or bacteria. Metal Implants and Autoimmunity. Autoimmune diseases and metal implants and devices - The SMART Choice. In the US, estimates of people afflicted by these debilitating health conditions range from 14.7 million to 50 million. 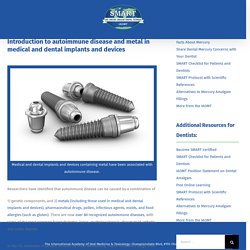 It is important to note that the number of people suffering from autoimmune disease is increasing, and the use of medical and dental implants and devices containing metal is likewise increasing. While numerous health conditions have been related to the presence of metals in the body, scientific research has clearly shown that autoimmune disease can be associated with metals used in dentistry and medicine, including metals in medical and dental implants, devices, and adjuvants (substances added to vaccines such as aluminum and mercury).

The relationship between vitamin C status, the gut-liver axis, and metabolic syndrome. JavaScript is disabled on your browser. 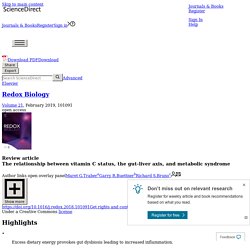 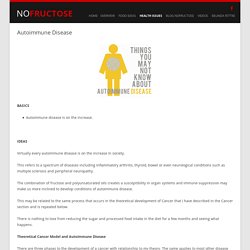 Virtually every autoimmune disease is on the increase in society. This refers to a spectrum of diseases including inflammatory arthritis, thyroid, bowel or even neurological conditions such as multiple sclerosis and peripheral neuropathy. The combination of fructose and polyunsaturated oils creates a susceptibility in organ systems and immune-suppression may make us more inclined to develop conditions of autoimmune disease. This may be related to the same process that occurs in the theoretical development of Cancer that I have described in the Cancer section and is repeated below. Re-framing the Theory of Autoimmunity in the Era of the Microbiome: Persistent Pathogens, Autoantibodies, and Molecular Mimicry - Amy D Proal - Discovery Medicine. Abstract: The theory of autoimmunity was developed at a time when the human body was regarded as largely sterile. 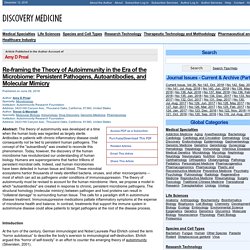 Antibodies in patients with chronic inflammatory disease could consequently not be tied to persistent human pathogens. The concept of the "autoantibody" was created to reconcile this phenomenon. Today, however, the discovery of the human microbiome has revolutionized our understanding of human biology. Humans are superorganisms that harbor trillions of persistent microbial cells. 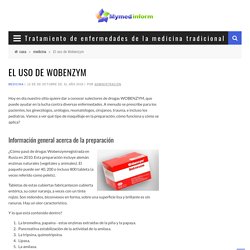 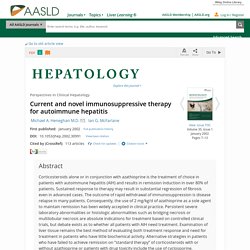 Sustained response to therapy may result in substantial regression of fibrosis even in advanced cases. The outcome of rapid withdrawal of immunosuppression is disease relapse in many patients. Consequently, the use of 2 mg/kg/d of azathioprine as a sole agent to maintain remission has been widely accepted in clinical practice. Persistent severe laboratory abnormalities or histologic abnormalities such as bridging necrosis or multilobular necrosis are absolute indications for treatment based on controlled clinical trials, but debate exists as to whether all patients with AIH need treatment.

Prothrombin index decrease: a useful and reliable marker of... : European Journal of Gastroenterology & Hepatology. Liver biopsy is a diagnostic method of extensive fibrosis/cirrhosis that has several limitations: (1) this invasive procedure induces marked anxiety, abdominal or shoulder pain, and discomfort [1]; (2) it is well known that this method is associated with a significant rate of false-negative results for the diagnosis of cirrhosis, particularly in the case of macronodular cirrhosis [2]; and (3) side effects are observed frequently after liver biopsy, and death may occur in some cases [1]. For several years, many teams have focused on the development of non-invasive serum markers to diagnose extensive fibrosis.

Sensitivity, specificity, predictive values and diagnosis accuracy of serum markers are still unsettled. Moreover, the use of non-invasive serum markers in patients with non-alcoholic liver disease is questionable, as the markers were analysed mainly in patients with alcoholic liver disease. Hyaluronate, an unbranched polysaccharide, is a component of extracellular matrix. 1. 2. 3.

Treatment of autoimmune liver disease: current and future therapeutic options. Role of metals in autoimmunity. Reversal of liver cirrhosis: current evidence and expectations. Patent US8242178 - Use of cannabidiol in the treatment of autoimmune hepatitis - Google Patents. The present application claims priority to U.S. Provisional Patent Application Ser. No. 60/936,040 filed on Jun. 18, 2007, entitled “Use of Cannabinoids in the Treatment of Hepatitis”, which is incorporated by reference herein. The present invention was developed with funding from the National Institutes of Health grant 5R01DA016545-05. The government retains certain rights in this invention. Cannabinoids as novel anti-inflammatory drugs. Use of Cannabinoids as a Novel Therapeutic Modality Against Autoimmune Hepatitis. Endocannabinoids in Liver Disease. The Seignalet Diet - Seignalet diet to reverse Autoimmune hepatitis. Number of Autoimmune hepatitis patients treated with the Seignalet diet over a period of 20 years : 7 100% remissions: 7 80/90% improvements: 0 50% improvements: 0 Failures: 0 “It is a curious and depressing truth, demonstrated time and again in medical history that the desire of the average physician to administer powerful and active drugs is only equalled by the desire of the average patient to have powerful and active drugs administered to him.”

Barbara Griggs: “Green Pharmacy” (A history of medicines and drugs through the ages) Newly diagnosed? Seignalet's Ancestral Hypotoxic Diet Explained + 6 Steps to Detoxifying Your Diet. It’s pretty safe to say that most people are motivated to clean up their diet for one reason: they want to have a rockin’ hot bod or, at the very least, a better body! I am motivated to eat mindfully for reasons that go well beyond my physical appearance. If you’ve been following along here on French Bliss Me over the past year or so, you may remember me mentioning that I have Multiple Sclerosis. Association Jean Seignalet. Seignalet diet. JEAN SEIGNALET worked as a doctor and professor in the Montpellier Hospital (France).

He was the administrator of the renal graft department during 30 years, and a pioneer in organ transplantation, especially renal. His wide knowledge as a doctor and biologist allowed him to create a global theory that related a big part of autoinmune diseases with modern diet, designing a diet that aplied with success to his patients. At first, he designet a diet to eliminate the possible stimulators of the immune system in autoinmmune diseases, specially in reumatologic ones: rheumatoid arthritis, ankylosing spondylitis, Behcet disease… The good results obtained moved him to apply his diet to autoinmmune diseases from othes specialities, and after that even to other diseases of unknown cause. The results are shown here. Role of Antimicrobial Peptides in Innate Immunity1. Skip to Main Content Sign In Register Advanced Search Online ISSN 1557-7023 Print ISSN 1540-7063 Copyright © 2017 The Society for Integrative and Comparative Biology Connect Resources.

Autoimmune Hepatitis as a Unique Form of an Autoimmune Liver Disease: Immunological Aspects and Clinical Overview. Management of autoimmune hepatitis: Focus on pharmacologic treatments beyond corticosteroids. Evaluation of the effectiveness of treatment with prednisone and azathioprine of autoimmune hepatitis in children. Difficult treatment decisions in autoimmune hepatitis. Natural Protection for Your Liver and Kidney. With Typical Autoimmune Hepatitis Labs, Biopsy Unneeded. Ala health professional. Hepatitis Children & CAM Alternatives. A comparison of hepatoprotective activities of aminoguanidine and N-acetylcysteine in rat against the toxic damage induced by azathioprine.