For The Love of Maps

Eleanor Lutz created a medieval-style map of Mars. Eleanor Lutz I’ve always been something of a map dork. 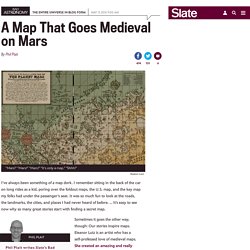 I remember sitting in the back of the car on long rides as a kid, poring over the foldout maps, the U.S. map, and the key map my folks had under the passenger’s seat. It was so much fun to look at the roads, the landmarks, the cities, and places I had never heard of before. … It’s easy to see now why so many great stories start with finding a secret map. Phil Plait writes Slate’s Bad Astronomy blog and is an astronomer, public speaker, science evangelizer, and author of Death From the Skies! Sometimes it goes the other way, though: Our stories inspire maps. She titled it “Here Be Robots,” which I love. Stanford's map center devoted to the 'joyful exploration of all things cartographic' The David Rumsey Map Center is a spacious room with maps at every turn – in slender atlases tucked into bookcases, displayed on the fragile pages of rare books, mounted on walls with magnets, gleaming on two vast video walls – even etched on its front doors. 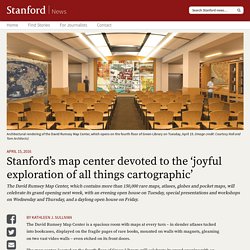 The map center, located on the fourth floor of Green Library, will celebrate its grand opening with an open house from 6 to 7 p.m. Tuesday, April 19. The festivities will continue with two days of special presentations and workshops (April 20-21), including talks by library staff, visiting scholars and Stanford faculty, and a daylong open house on April 22. The events are open to the public; registration is required. Exhibition designer Becky Fischbach talks with David Rumsey in the David Rumsey Map Center in Green Library.

GrafoMaps Turns Any Location in the World Into a Graphic Map Print to Hang on Your Wall. The new company GrafoMap gives any location in the world—yes, any—the artsy treatment. 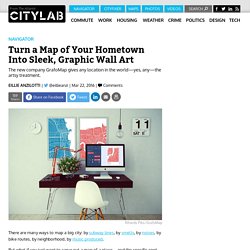 There are many ways to map a big city: by subway lines, by smells, by noises, by bike routes, by neighborhood, by music produced. But what if you just want to carve out a map of a place—and the specific spot within that place—that represents local pride for you? The Riga, Latvia-based company GrafoMap, which launched two months ago, makes it possible to do just that. On the website, you can search for any location in the world, zoom in or out to your heart’s content, and select one of four filters to create a completely custom print.

(You can see how five CityLab editors chose to rep their hometowns, below.) Here Is A great Interactive Tool to Teach Students How to Read A Map. March 17, 2016 Here is a great educational tool we came across today as we were working on the list of social studies websites for elementary students. 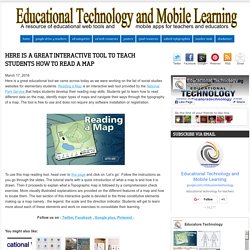 Reading a Map is an interactive web tool provided by the National Park Service that helps students develop their reading map skills. Students get to learn how to read different data on the map, identify major types of maps and navigate their ways through the typography of a map. The tool is free to use and does not require any software installation or registration. The NYPL's Map Expert Explains This "Wondrous" Map Of 1920s Manhattan: Gothamist. Manhattan: 10th Avenue - 25th Street (Courtesy of the NYPL) This colorful map dates back to 1926, and is sort of like one you'd find in a brochure for Disney World. 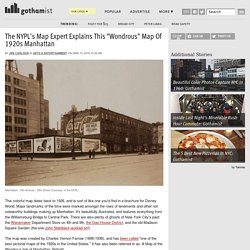 Major landmarks of the time were marked amongst the rows of tenements and other not noteworthy buildings making up Manhattan. It's beautifully illustrated, and features everything from the Williamsburg Bridge to Central Park. Rare Globes From the 1600s Are Being Digitized So You Can Spin Them Online. David Neikirk is 3D imaging a vintage globe. 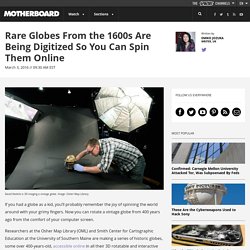 Image: Osher Map Library If you had a globe as a kid, you’ll probably remember the joy of spinning the world around with your grimy fingers. Now you can rotate a vintage globe from 400 years ago from the comfort of your computer screen. Researchers at the Osher Map Library (OML) and Smith Center for Cartographic Education at the University of Southern Maine are making a series of historic globes, some over 400-years-old, accessible online in all their 3D rotatable and interactive glory. Their work is supported by a $60k (£43k) National Endowment for the Humanities Fund. 13 Great Tools for Creating Your Own Maps to Use in Class. February 11, 2016 Today we have spent sometime going through our Map Tools archive and curated for you the collection below. 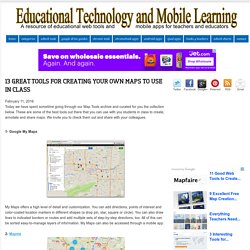 These are some of the best tools out there that you can use with you students in class to create, annotate and share maps. We invite you to check them out and share with your colleagues. 1- Google My Maps My Maps offers a high level of detail and customization. You can add directions, points of interest and color-coated location markers in different shapes (a drop pin, star, square or circle). 2- Mapme Mapme is a platform that enables anyone to build smart and beautiful maps without any coding. 3- ZeeMaps 4- Google Maps API. This Interactive Map Lets You Explore Locations From Your Favorite Books. 17 4ShareNew Ever wonder what books were set in your hometown? 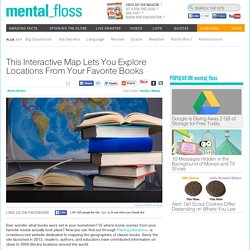 Or where iconic scenes from your favorite novels actually took place? The best American wall map: David Imus’ “The Essential Geography of the United States of America” American mapmaking’s most prestigious honor is the “Best of Show” award at the annual competition of the Cartography and Geographic Information Society. 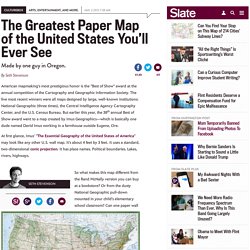 The five most recent winners were all maps designed by large, well-known institutions: National Geographic (three times), the Central Intelligence Agency Cartography Center, and the U.S. Census Bureau. But earlier this year, the 38th annual Best of Show award went to a map created by Imus Geographics—which is basically one dude named David Imus working in a farmhouse outside Eugene, Ore. At first glance, Imus’ “The Essential Geography of the United States of America” may look like any other U.S. wall map. 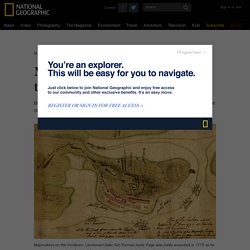 Few maps had been made of the interior of what would become the United States, and commanders often had to rely on maps drawn by soldiers in the midst of the fighting. (Read 4th of July: Nine Myths Debunked.) The new book Revolution: Mapping the Road to American Independence collects many such battle-tested maps, which give fresh perspectives on the period’s key conflicts. 10 amazing vintage maps from the New York Public Library's Digital Collection. The New York Public Library just made over 180,000 of its public domain images available for high-resolution download this Wednesday. If you have some time to spare, it's definitely worth poking around the archives. All the images on the site are free to share and reuse, and you can find fascinating old menus, historical photos, documents, illustrations and more.

Below, check out ten antique maps from the database that provide interesting peeks into New York City history from 1639 to 1940. Cartonerd: Favourite maps from 2015. I feel it's been a good year in cartography. Since I started this blog, focusing on cartographic howlers, the various tools with which people make maps have improved and the quality of maps is also improving.

The book, organized into eight geographical regions, chronicles sites across the globe that have been afflicted by a miscellany of misfortunes. Le Carrer’s work is aimed at those who believe the world is still full of mysteries to investigate. This World Map Combines Myth With Real Geography Like No Other Map We Know. By Frank Jacobs The oceans on this Burmese map of the world are as flat and blue as ours. That much is familiar at least. But the land masses rising from their waves are unlike anything in Western cartography. This is the best map of the United States you'll ever see. They Don't Make Maps Like this Anymore. 10 Maps That Will Change How You View The World.

Maps are one of those things you can lose yourself in for hours. Since their humble origins as scribbles in the sand thousands of millennia ago, maps have been useful companions during the development of human culture and society. Now, in an age of seemingly endless information, maps are more abundant, advanced and fascinating than ever before. Here are some of the most interesting maps we could find; hopefully, they will leave you looking at our little "pale blue dot" with a fresh perspective. Goode Homolosine Projection Image credit: Strebe/Wikimedia Commons. Collections with Maps. 8 Antique Maps That Were the First of Their Kind. Cartographers shape how we think about the world. The designers and explorers who create maps influence things like whether we think of North America as above South America or below, how big we think Greenland is. These Centuries-Old ‘Dissected Maps’ Were the Earliest Jigsaw Puzzles. Solving modern-day jigsaw puzzles is often about piecing together fun scenes, but the objects of leisure once served a more educational purpose.

LEGO Topography - Susan's Homeschool Blog Susan's Homeschool Blog. You can teach your kids about geography, topography, and landscaping through making topography scenes. You can choose a real location and re-create it in LEGOs, or you can create your own scene. This is a great activity for learning about geographic terms such as waterfall, fjord, peninsula, cave, volcano, archipelago, delta, glacier, island, mesa, etc. A topographic map uses contour lines to represent three-dimensional features such as mountains. You can teach kids how to read contour maps and have them build the topographic map with LEGOs. LEGO Topography - Susan's Homeschool Blog Susan's Homeschool Blog. Maps: charting and changing the world – in pictures. 10 Maps That Will Change How You View The World. Worlds Revealed: Geography & Maps at The Library Of Congress. Recently, the Geography and Map Division has undertaken a large scale project to collect manuscripts, technical information, algorithms, software, and hardware from the earliest days of computer cartography.

This project, which is being directed by the author, began as a series of lectures for graduate students that I gave at Johns Hopkins University on the mathematical foundations of Geographic Information Science (GIS), and which peaked my interest in early GIS many years ago. Here Is A Good Tool for Creating Interactive Maps. November 6, 2015 Mapme is an interesting web tool that allows you to create interactive maps to share with others. You can add as much content to your map as you want. For instance, you can create a map displaying locations you will visit in your next field trip with your students or design a map featuring historical locations and events in your school community. Mapme is ideal for showcasing mapped content in an interactive format. Other interesting features provided by Mapme include the ability to organize layered content using tags and categories, customize the look and feel of your maps by adding a custom logo, icons and colours.

You can also use data imported from an Excel file right into your map. To start using Mapme, you need to sign up using a valid email address. Magnificent Maps of New York - Maps and views blog. This way to the catnip for map geeks. If you’re a map geek – and many travelers are – you may wish to avert your eyes. How The Internet's Most Prolific Map Designer Creates His Viral Worlds. 8 Stunning Maps That Changed Cartography. Collections with Maps. 20 Good Map Creation Tools for Students. Natural Atlas Maps Your Trips Into the Great Outdoors. The Medieval Digital Map.