Shaved asparagus frittata. As a person who at least two to three nights a week doesn’t understand why we plan menus and grocery lists when we could just be eating an egg on toast, scrambled, crispy, poached or soft-cooked and smashed, I, too, would expect this site to have more frittata recipes than it does. 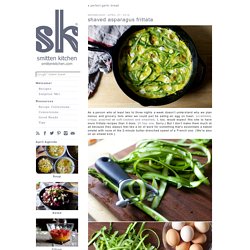 (It has one. Sorry.) But I don’t make them much at all because they always feel like a lot of work for something that’s essentially a baked omelet with none of the 2-minute butter-drenched speed of a French one. (We’re also on an omelet kick.) I blame the parcooked vegetables. My other gripe is that although I love my cast-iron skillet endlessly and think I keep it well-seasoned, my frittatas always stick, which leads to scrubbing and the grumpiness that comes from messing with a hard-won finish. * which at least one of us worked off running their first half-marathon; that person was, predictably, not me. Shaved Asparagus Frittata. Seeded Popovers Recipe. The most delightful thing my oven produces is the popover. 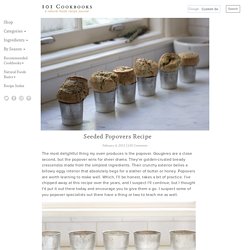 Gougères are a close second, but the popover wins for sheer drama. They're golden-crusted bready crescendos made from the simplest ingredients. Their crunchy exterior belies a billowy eggy interior that absolutely begs for a slather of butter or honey. Popovers are worth learning to make well. Vegan Zucchini Bread. A friend of mine from Books Through Bars tipped me off to this delicious recipe back in 2008. 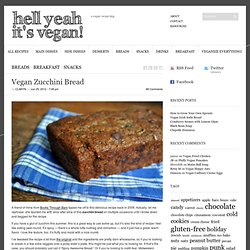 Actually, let me rephrase: she taunted me with slice after slice of this zucchini bread on multiple occasions until I broke down and begged for the recipe. If you have a glut of zucchini this summer, this is a great way to use some up, but it’s also the kind of recipe I feel like eating year-round. It’s spicy — there’s a whole lotta nutmeg and cinnamon — and it just has a great, warm flavor. Pumpkin cinnamon rolls. Something kind of terrifying is going on around here, and it started in the back of the closet. 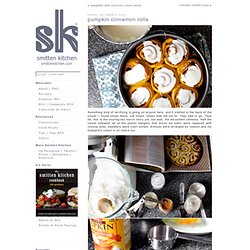 I found shoes there, old shoes, shoes that did not fit. They had to go. Thus far, this is the snoring-est horror story yet, but wait, the discontent simmers: Half the closet followed, all of the plastic hangers that drove me batty were replaced with nonslip ones, sweaters were color-sorted, dresses were arranged by season and my husband’s closet is on notice too. It gets worse: What began as a vague declaration that “this coffee table needs to be replaced” turned into an entire living room overhaul, from a fresh paint job to a new sofa, chairs, and yes, tables too. The throw pillows are looking nervous, as well they should. You see, you can’t go on book tour if your son’s toys aren’t yet in colorful baskets; somewhere it is written. But the parallels between writing a book and having a baby are surprisingly numerous. Buttermilk Berry Muffins Recipe.

The other morning I found myself gushing to this guy about some muffins I baked. 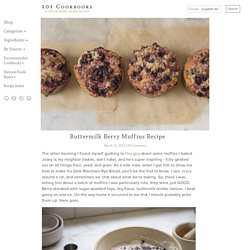 Josey is my neighbor (ladies, don't hate), and he's super inspiring - fully geeked out on all things flour, seed, and grain. As a side note, when I get him to show me how to make his Dark Mountain Rye Bread, you'll be the first to know. I see Josey around a lot, and sometimes we chat about what we're baking. So, there I was, telling him about a batch of muffins I was particularly into, they were just GOOD. Berry-streaked with sugar-sparkled tops, big flavor, buttermilk tender texture, I kept going on and on. I used whole wheat pastry flour, huckleberries from last summer (frozen), and topped them with crushed rose cinnamon sugar. To make them extra-special I decided to top them. Whole Wheat Pumpkin Honey Walnut Bread Recipe.

Beauty - Thy name is Pumpkin Bread! 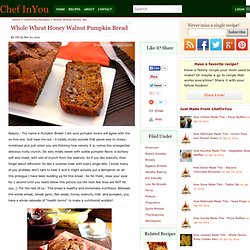 I am sure pumpkin lovers will agree with me on this one. Just hear me out - A totally crusty outside that paves way to chewy moistness and just when you are thinking how velvety it is, comes the unexpected delicious nutty crunch. Its very mildly sweet with subtle pumpkin flavor, is buttery soft and moist, with lots of crunch from the walnuts. So if you like walnuts, then forget about leftovers! Its like a surprise treat with every single bite. Changes I Made: I found this delicious slice of heaven in the Whole Foods Market website and decided to make it the same day. References recipe adapted from whole foods market and the pumpkin pie spice is courtesy all recipes Basic Information Prep Time: 30 min to 1 hour Cook Time: 30 min to 1 hour Serves: 4 people Yield: Makes one 8 inch loaf Ingredients Tips 1.Wheat Germ: If you do not have it, simply replace it with either Oat Germ or additional wheat flour. Method Preheat oven to 350°F.. Until smooth.Set aside. Best Ever Eggless Banana Oatmeal Muffins Recipe - Food.com - 22600.