FindSounds - Search the Web for Sounds 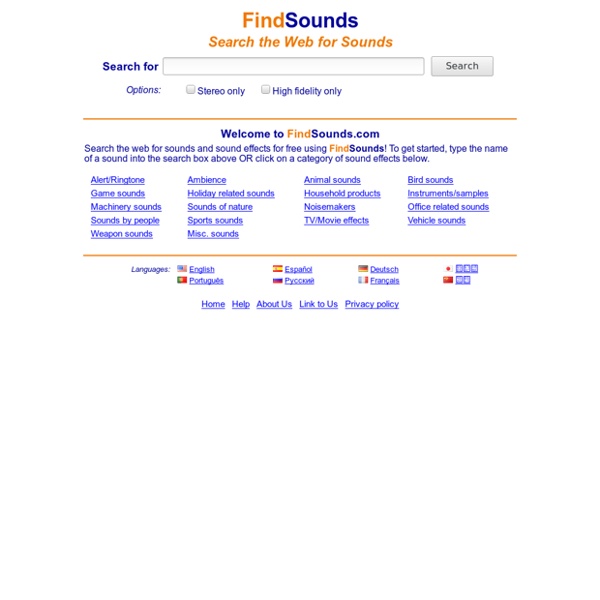 Online Drum Machine Drumbot is the next best thing to a real drummer. Full song loops and tons of grooves. Designed specifically for non-drummers for use as backing tracks during song composition. We've partnered with real drummers, (can you think of a better beat maker?) who've created entire songs, from intro to outro, then organized everything to help you discover that perfect groove. Each of the hand-crafted "songs" consists of a collection of loops (loop set) that all run at the same BPM and are all inter-related.

Examples of Gliffy Diagrams Gliffy’s friendly editor, vast symbol libraries, and handy templates make it easy to communicate your thoughts and plans visually. You’re just minutes away from all the diagrams you need: Flow Charts SWOT Analysis UML Charts It’s Not My Fault… Ironically enough I actually had my ass handed to me, during a few rounds of Fruit Ninja, by my rotund friend at Intervention the weekend before last. Personally, I do not own a Kinect. Nothing so far about this peripheral has screamed “must have” for me yet. Los puentes de vida de los PlanetOddity.com Cherrapunji The Living Bridges Of The Cherrapunji Posted on 03 February 2010 Crni It is incredible to see the bridges in Cherrapunji grow on their own, instead of being built. They are called ‘Living Bridges’ of Cherrapunji. Cherrapunji, in Meghalaya, India, is famous for the highest amount of rainfall in the world. It is not only the maximum rainfall that you witness here, but the place is adorned with amazing plants also, which leave you astonished.

The Best Copyright-Free Photo Libraries: - DotGovWatch Exposing the good, the bad, and the buggy - A Blog Monitoring U.S. Federal, State, and Local Government Websites Thousands of photos taken by U.S. Government employees as part of their official duty are free of copyright and free to use. Based on my extensive review of government photo libraries, the best collections below. How to easily convert any music to 432hz and why A frequency is the number of movements up and down per second, called hertz. Energy is the ability to move, it is what fuels the movement up and down. 432hz tuning simply means that the note A in the middle of the musical scale will vibrate at 432hz, then all other notes along the scale are tuned accordingly. All octaves of the A note will be doubles or halves of that 432hz frequency (27, 54, 108, 216, 432, 864, etc) Here are various cosmic measurements, where we find the exact same numbers :

Our Digital Media Services include DM Strategy and Branding, Product and Design, Web Services, Social Media Marketing, SEO and SEM. What you need about your mark or company. PH1, strategically is aware of this blending of these concepts, quickly prepares and offers all the activities, you will bring the most effective content to your target audience effectively. No matter which industry or the scale, the fastest way to add value to your brand and what your customers want to meet, all of your requests will be answered in PH1’s services. We would be appreciated with offering a free a week trial of our services so you can see us in action yourself! Ph1istanbul Digital Media Agency by ph1istanbul Aug 12