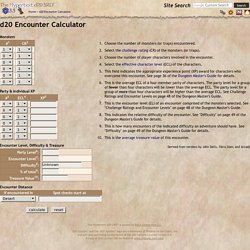 Select the challenge rating (CR) of the monsters (or traps). Choose the number of player characters involved in the encounter. Select the effective character level (ECL) of the characters. This field indicates the appropriate experience point (XP) award for characters who overcome this encounter. See page 36 of the Dungeon Master's Guide for details.

Derived from versions by John Dells, Tiera Starr, and Arcady. The Adventure Zone. Here's a collection of over 360 historical city maps and illustrations that I've gathered from /r/papertowns, portraying many of the world's cities from the times of antiquity to the 21st century : history. Rajamaiden encounttereita (unedit) 100 Adventure Ideas (DnD Other) Remember as you add ideas that you are writing a story. 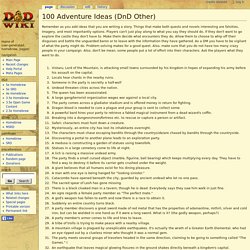 Things that make both quests and novels interesting are falsities, Imagery, and most importantly options. Players can't just play along to what you say they should do. If they don't want to go explore the castle they don't have to. Make them decide what encounters they do. Allow them to choose to whip off their disguises and battle the unguarded baron or to leave with the information they have gathered. Vistaru, Lord of the Mountain, is attacking small towns surrounded by his kingdom in hopes of expanding his army before his assault on the capital.

Dungeon Generator for D&D. Welcome to Scenic Whereverthefuck, if you lived here, you’d be caught up in drama by now. In my short, sharp review of Scenic Dunnsmouth at the end of the last post, I listed what I felt were its shortfalls when I was running it, chief of which was the lack of inter-NPC relationships. 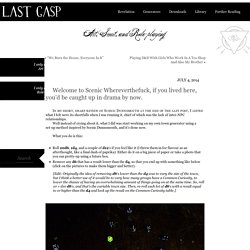 Well instead of crying about it, what I did was start working on my own town generator using a set-up method inspired by Scenic Dunnsmouth, and it’s done now. What you do is this: Roll 20d6, 1d4, and a couple of d12‘s if you feel like it (I threw them in for flavour as an afterthought, like a final dash of paprika). Either do it on a big piece of paper or take a photo that you can pretty-up using a future box.Remove any d6 that has a result lower than the d4, so that you end up with something like below (click on the pictures to make them bigger and better). 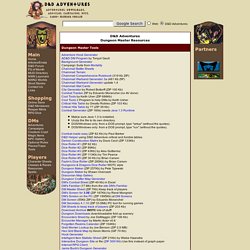 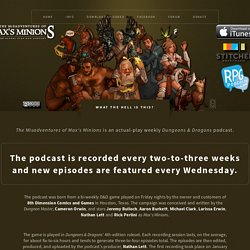 The podcast is recorded every two-to-three weeks and new episodes are featured every Wednesday. The podcast was born from a bi-weekly D&D game played on Friday nights by the owner and customers of 8th Dimension Comics and Games in Houston, Texas. The campaign was conceived and written by the Dungeon Master, Cameron Orwin, and stars Jeremy Bulloch, Aaron Burkett, Michael Clark, Larissa Erwin, Nathan Lett and Rick Perlini as Max's Minions. The game is played in Dungeons & Dragons' 4th-edition ruleset. Each recording session lasts, on the average, for about fix-to-six hours and tends to generate three-to-four episodes total. 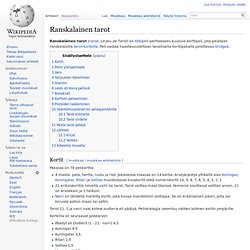 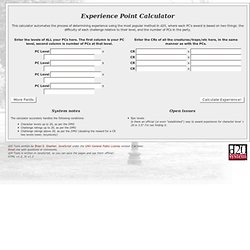 At the moment, all that exists is an experience point calculator, but more tools are coming. This calculator automates the process of determining experience using the most popular method in d20, where each PC's award is based on two things: the difficulty of each challenge relative to their level, and the number of PCs in the party. Enter the levels of ALL your PCs here. The first column is your PC level, second column is number of PCs at that level. Random Dungeon Generator.