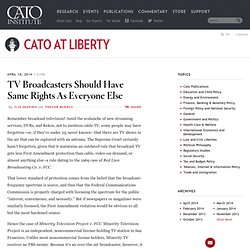 Skeptics remain many: everything depends on whether the ruling elite, and not just President Hassan Rouhani, is serious about reform. Iran should demonstrate its commitment by respecting religious liberty. The most celebrated case of persecution today is Saeed Abedini, an American citizen born in Iran and sentenced to eight years in prison last year for “undermining national security” by the Iranian government.

A Muslim convert to Christianity, his “crime” in Tehran’s view apparently was aiding house churches. He went to Iran in 2012 to set up an orphanage, with the government’s approval. Unfortunately, Abedini represents far broader religious repression. Tehran’s brutal persecution has been getting worse. Currently the regime appears to be most concerned about conversions. Iran is a theocratic state whose laws are to be based on “Islamic criteria.” Government hostility encourages private discrimination as well. 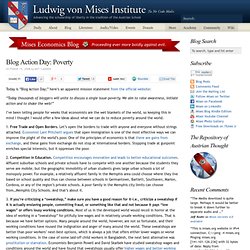 We aim to raise awareness, initiate action and to shake the web!” I’ve been telling people for weeks that economists are the wet blankets of the world, so keeping this in mind I thought I would offer a few ideas about what we can do to reduce poverty around the world. 1. Free Trade and Open Borders. 2. 3. 4. 5. Samizdata.net. Institut économique Molinari : proposer des solutions alternativ. TCS Daily : Technology - Commerce - Society.

The Austrian Economists. |Peter Boettke| Listening to NPR one morning, this story about soccer playing robots came on and I was intrigued by the discussion. 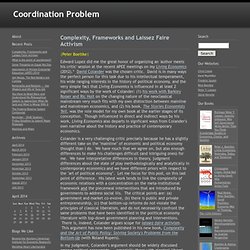 When I entered graduate school and was assigned to Don Lavoie, my expectation would be that I would be working on questions related to the problems of economic calculation under socialism. Of course, I wasn't disappointed as in the first 2 years of graduate study Lavoie was finishing up Rivalry and Central Planning, and National Economic Planning: What is Left? But most of my work for Don at that stage of those projects was reference checking, his argument was already completed and written down. So besides learning by reading his books, I learned how to work the open stacks at the Library of Congress and browse the University of Maryland library shelves to double check and track down accurate references that Lavoie was citing.

Well now go back to think about our soccer playing robots. Reason Magazine. Hit & Run : Reason Magazine. PwCWith tax season upon us, if you were a foreign business owner regarding all of this scurrying around to file forms and pay the United States government its take, would you consider the activity as relatively attractive compared to the alternatives? 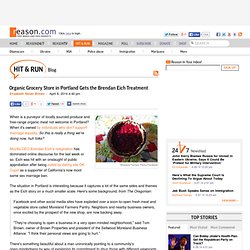 Or would you consider it a turnoff? To judge by rankings released last year by the consulting firm PricewaterhouseCoopers (you can call it PwC), businesses may venture into the Land of the Free for market opportunities, but that may well be despite a pretty uncompetitive tax regime. The U.S. ranks 64 out of 189 for ease of paying taxes, has a total tax rate that's above average and, importantly, barely seems to be trying to compete with other countries that Americans once mocked as overtaxed and overgoverned. According to PwC, "Paying Taxes 2014 looks not only at corporate income tax, but at all of the taxes and mandatory contributions that a domestic medium-size case study company must pay. 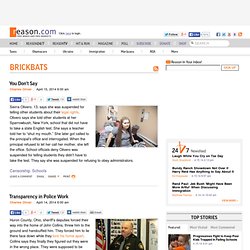 Olivero says she told other students at her Sparrowbush, New York, school that did not have to take a state English test. She says a teacher told her to “shut my mouth.” She later got called to the principal's office and interrogated. When the principal refused to let her call her mother, she left the office. School officials deny Olivero was suspended for telling students they didn't have to take the test. Huron County, Ohio, sheriff's deputies forced their way into the home of John Collins, threw him to the ground and handcuffed him.

Rob Scott says he may have caught a world-record trout while ice fishing on the Ontario side of Lac La Croix. Two University of Utah students are angry that police entered their apartment in Midvale one night, pulling them out of bed, handcuffing them and interrogating them. A St. DeKalb County, Georgia, police officer Demetrius A. Le blogue du QL. Objectif Liberté. Institut Turgot.