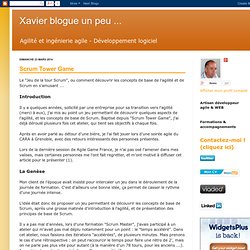 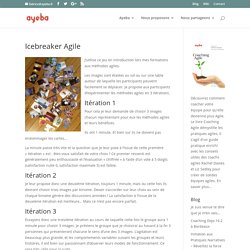 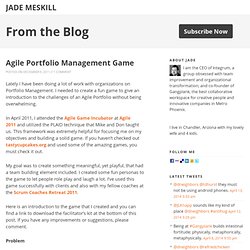 I needed to create a fun game to give an introduction to the challenges of an Agile Portfolio without being overwhelming. In April 2011, I attended the Agile Game Incubator at Agile 2011 and utilized the PLAID technique that Mike and Don taught us. This framework was extremely helpful for focusing me on my objectives and building a solid game. If you haven’t checked out tastycupcakes.org and used some of the amazing games, you must check it out. Intro to Refactoring with LEGOs. Practicing Into to Refactoring with LEGOs. 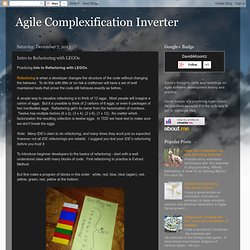 Refactoring is when a developer changes the structure of the code without changing the behavior. To do this with little or no risk a craftsman will have a set of well maintained tests that prove the code still behaves exactly as before. A simple way to visualize refactoring is to think of 12 eggs. Most people will imagine a carton of eggs. But it is possible to think of 2 cartons of 6 eggs; or even 6 packages of two hardboiled eggs. Note: Many IDE's claim to do refactoring, and many times they work just as expected; however not all IDE refactorings are reliable. To introduce beginner developers to the basics of refactoring - start with a well understood class with many blocks of code.

But first make a program of blocks in this order: white, red, blue, blue (again), red, yellow, green, red, yellow at the bottom. TDD: Test Driven Drawing. Timing: 30 minutes Materials: Preferably an even number of players as they play in pairs, but you can have one team of 3. 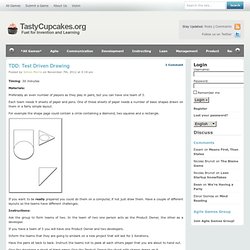 Each team needs 4 sheets of paper and pens. One of these sheets of paper needs a number of basic shapes drawn on them in a fairly simple layout. 99 Test Balloons. Check the error messages » Blog Archive » Simple (non-coding) TDD Game. I did an intro to test driven development (TDD) talk for TechMeetup Aberdeen last night and started with the ‘ simple TDD game ‘. 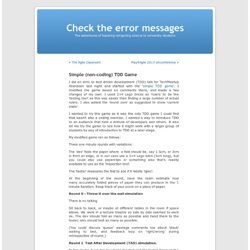 I modified the game based on comments there, and made a few changes of my own. I used 2×4 Lego bricks as ‘rulers’ to be the ‘testing tool’ as this was easier than finding a large number of actual rulers. I also added the ’round zero’ as suggested to show ‘current state’. The Scrum Penny Game – a modification. *All Games* Gamestorming. The Airplane Factory Game « Agile Way. One of the best ways to introduce a new culture, methodology or processes is using a game. The reason is simple: people understand better when they practice the theory, besides only listen to it. The Airplane Factory Game is a simple game to introduce people to Agile and SCRUM. And also, it could be easily adapted to Lean, XP, etc. This article will explain briefly the game, showing the rules, some tips and results. Also, you will be able to download it The Airplane Factory was created in 2007 by me (Flavio Steffens de Castro). GetKanban.com. ScrumKnowsy.

The Draw-This-Drawing Game. This is the game I’ve been teaching since the late 1990s at all my agile development classes. 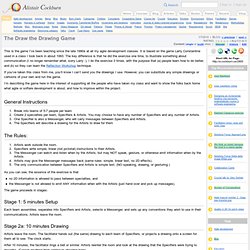 It is based on the game Larry Constantine used in a class I took back in about 1993. The key difference is that he did the exercise one time, to illustrate something about communication (I no longer remember what, sorry Larry :). I do the exercise 3 times, with the purpose that (a) people learn how to do better, and (b) so they can learn the Reflection Workshop technique. If you’ve taken this class from me, you’ll know I can’t send you the drawings I use. However, you can substitute any simple drawings or cartoons of your own and run the game. 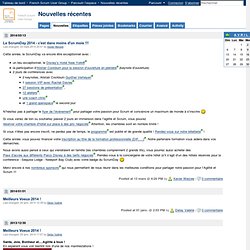 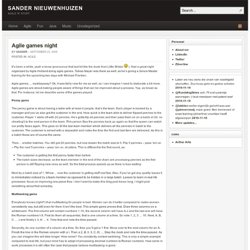 Had a great night organized by Agile Holland doing agile games. Tobias Mayer was there as well, as he’s giving a Scrum Master training for the upcoming two days with Michael Franken. Penny Queueing Exercise - Lean Process (Agile Advice) This simple simulation exercise helps people to understand the efficiency that can come from moving away from a waterfall or large batch process. 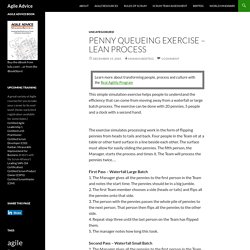 The exercise can be done with 20 pennies, 5 people and a clock with a second hand. The exercise simulates processing work in the form of flipping pennies from heads to tails and back. Four people in the Team sit at a table or other hard surface in a line beside each other. The surface must allow for easily sliding the pennies. The fifth person, the Manager, starts the process and times it.

Henrik Kniberg's name game. The Scrum Game a Fun Interactive Tool for Learning Scrum Agile. Mike Cohn of Mountain Goat Software and Bill Wake introduced The Scrum Game at the Spring 2007 Scrum Gathering in Portland. This cooperative game features teams of any size (four or five are ideal but any number can play) moving around a familiar-looking game board while trying to burndown a committed amount of work.

Each game simulates a ten-day sprint. While completing their work, players are occasionally presented with Opportunities. Each Opportunity is solved through collaborative team discussion and represents a chance for the team to overcome an obstacle and improve. Improve and they burn work down faster. Players may also become blocked by various Impediments that await on the game board. Scrum from Hell. Goal: Practice standup meetings with a dysfunctional one. Time: 15-20 minutes. This exercise is for a group of 6 to 8 participants who stand up, and some number of observers who may sit and watch.

Background Describe a Scrum meeting, so people understand the three questions and the flow of the meeting.Describe common problems and interventions that address them. Top 100 Learning Game Resources. Scrum Trainers Gathering (2/4): The Ball Point Game « Kane Mar. Scrum Trainers Gathering (2/4): The Ball Point Game Posted by Kane on 07/04/2008 · 17 Comments Update: part 1, part 2, part 3 and part 4. In part 1 of my report on the Trainers Gathering I gave an gave a summary of the events that occurred. In this post I’d like to discuss one of the exercises that was discussed.

Learning Scrum through the Ball Point Game. The ball point game by Boris Gloger is a great game for introducing Scrum to new agile teams. I have played and facilitated this game a few times and would like to share my notes. Many thanks to Boris for creating this game. Special thanks to Henrik Kniberg and Robyn Dymond for facilitating and sharing their ideas on the game at AYE 2009. Rules The point of this game is to pass as many balls as possible through every team member in 2 minutes.