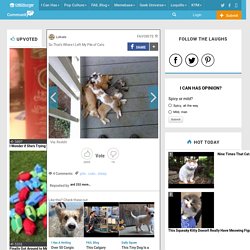 One of world's oldest cats mistakenly put down by vet. Miez Maz, one of the oldest pet cats in the world, was put to sleep at the age of 33 when a vet mistook him for a sick stray. 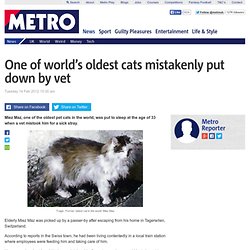 Elderly Miez Maz was picked up by a passer-by after escaping from his home in Tagerwilen, Switzerland. According to reports in the Swiss town, he had been living contentedly in a local train station where employees were feeding him and taking care of him. Someone Unzip it, Quick! Login Very Demotivational Channels Cheezburger Channels Upvoted Do It the Columbus Way! 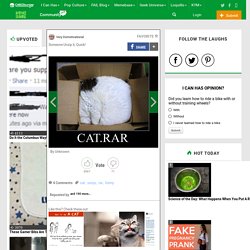 6 Adorable Cat Behaviors With Shockingly Evil Explanations. Imitating Snakes to Intimidate You Anyone who has ever witnessed a visceral deathmatch between two angry cats is intimately aware of the blood curdling noises the cute little animals are able to create. 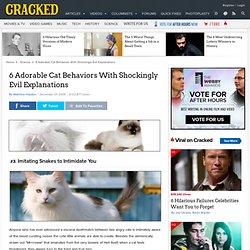 Besides the demonically drawn out "Mrrrroww" that emanates from the very bowels of Hell itself, when a cat feels threatened, they always turn to the tried and true hiss. Lots of animals make this noise when in the throes of battle, but why? 5 Tips for Teaching Your Kids How to Properly Handle a Cat. Like humans, each cat has a unique personality. 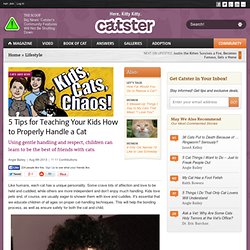 Some crave lots of affection and love to be held and cuddled, while others are more independent and don't enjoy much handling. Kids love pets and, of course, are usually eager to shower them with love and cuddles. It's essential that we educate children of all ages on proper cat-handling techniques. This will help the bonding process, as well as ensure safety for both the cat and child. Cat Health Facts. There are such diseases as feline leukemia and feline AIDS. 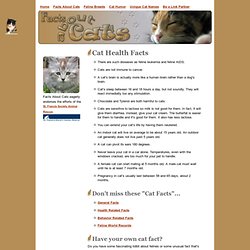 Cats are not immune to cancer. A cat's brain is actually more like a human brain rather than a dog's brain. Cat's sleep between 16 and 18 hours a day, but not soundly. They will react immediatly too any stimulation. 5 Ways You Didn't Realize You're Making Your Pet Hate You. It's hard to stay mad at your pets, even when they're pooping on your sheets or chewing on your Mr. 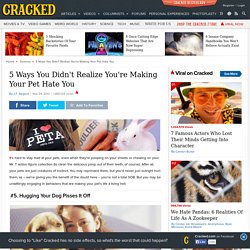 T action figure collection (to clean the delicious poop out of their teeth, of course). After all, your pets are just creatures of instinct. You may reprimand them, but you'd never just outright hurt them, as -- we're giving you the benefit of the doubt here -- you're not a total SOB. But you may be unwittingly engaging in behaviors that are making your pet's life a living hell. #5. Comstock/Comstock/Getty Images One of the best things about pets is how affectionate they are. Hemera Technologies/AbleStock.com/Getty Images"Your attempts at productivity will prove futile. But it turns out that our understanding of pet affection may be a bit flawed. Came home to realise I have left my cat outside all day. He is Mine. He is My Fuzzy! We iz Package Deal! Always Share Your Hobbies With Your Friends! I Think It's Time to Go on a Diet. Login Cheezburger Channels Upvoted I Wonder if She's Trying to Tell Me Something... 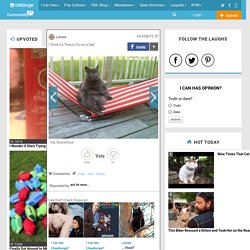 Finally Got Around to Mowing the Lawn Today Can Someone Link Her That 'List of Burn Centers' Wikipedia Page, Please? I.chzbgr. The 25 Most Awkward Cat Sleeping Positions. Think of All the Hits. Login Search. 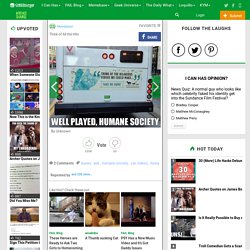 Healthy & Safe Cat Food. Watch the online movie and listen to the voice recording by Dr Jane Bicks, and you will know what items on the ingredient and nutrition labels of the cat food you buy are NOT good for your cat or kitten - such as corn, soy, wheat, gluten, animal byproducts, and unhealthy chemical preservatives. 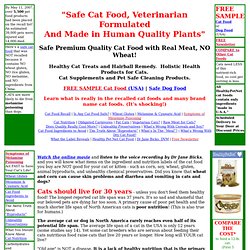 Did you know that wheat and corn can cause skin problems and diarrhea and vomiting in cats and dogs? Cats should live for 30 years - unless you don't feed them healthy food! The longest reported cat life span was 37 years. It's so sad and shameful that our beloved pets are dying far too soon. A primary cause of poor pet health and the much shorter life span of North American cats is poor nutrition!

The average cat or dog in North America rarely reaches even half of its potential life span. "Old age" is NOT a disease. Ethical Pets Blog » Food. Is vegan cat food natural, safe or healthy? In 2003 Tina M Gray sent a sample of two American vegan cat food brands to a lab. She found that both were deficient in some of the specified/required levels of nutrients. She concluded that these specific foods “could not be recommended as a sole source of nutrition for cats.” [1] Andrew Knight argued that the results were caused by poor quality control during feed manufacture, but that cats can still be vegan safely [1b].

Three years later, Wakefield, Shofer and Michel took blood and plasma samples from several American vegan cats to look for likely deficiencies. They found most had normal results, a few had poorer than normal results but none were critically deficient [2]. These two studies represent the bulk of research into the effects of vegan cat food, therefore a) decisive answers are impossible and b) debate amongst scientists is polarized and based more on opinion than data. Yes. Optimal Nutrition for Your Cat. 9th June 2012 By Jordan & Kyla Miller Contributing Writers for Wake Up World Have you ever noticed your cat binging on grass, only to soon after throw it up? To us, it can be a very disturbing scene. After all, we don’t like to see our pets suffer.

Domestic animals, like humans, are subject to the damaging effects of cooked and processed foods, food additives, environmental pollution, over-vaccination and the stress of modern day living. Advertising and claims of pet food manufacturers have contributed to the misinformation surrounding what is best for our pets. Just as with people, cats have a very intricate and complex network of body mechanics. What can be done? In the wild, cats instinctively thrive on raw, whole pray and very little plant food. 4 Dog Food Allergy Myths. Allergies are a common problem for dogs.

Typical symptoms include itchiness resulting in excess scratching, biting, or licking, and sometimes chronic or recurrent skin/ear infections. While dogs most frequently suffer from allergies to environmental triggers (e.g., pollen, molds, and dust mites or flea bites), allergic reactions to food are possible, and are frequently a source of greater controversy. Diagnosing canine food allergies is not easy. It typically requires a food trial during which a dog eats ABSOLUTELY NOTHING other than a food containing protein and carbohydrate sources to which he has never been exposed before.

Another option is to only allow your dog to eat food that has been processed in such a way as to make it hypoallergenic. I think the difficulty we have in definitively diagnosing food allergies in dogs is at least partially responsible for some of the myths that have developed around the condition. In fact, protein sources are more often to blame than grains. Frequently Asked Questions - Vegan Cat Food - Vegan Dog Food. No, we don't think so. As vegans personally, and as a vegan company, our goal is to reduce animal suffering and death by as much as we possibly can.

Can cats and dogs be Vegan? - Vegan Cat Food - Vegan Dog Food. Without a doubt, cats and dogs can be vegan. Over our many years in business, we have heard countless success stories from people whose companion animals have transitioned to a vegan diet and have been happy and healthy the entire time. How to Make Vegan Cat Food. Cat Furniture- Modern Luxury Cat Trees, Litter Box Furniture, Towers.

Magnificent Modular Cat Climbing Wall  How to walk your human. ISP Sends Customer a Spare Router for His Cat to Nap On. Now that's customer service! Chances are, if you've got a cat, you know how weird they can be. You also probably know that they have an obsession with electronics and will sit on keyboards, consoles, and anything else with a power button. There isn't really much you can do to stop them, as cats generally tend to do whatever they like, whenever they like; and sitting on warm, cozy electronics seems to be pretty high on their list of likes. However, one ISP in the UK did manage to come up with a solution for a customer whose cat wouldn't stay off his router. Reddit user Pope_friction recently revealed that a tongue-in-cheek complaint posted to his ISP's community discussion boards yielded an unexpected response.

"I'm having a problem with my router," the post began. "I'm sick of my internet going down all the time due to this - is there a fix? Pope_friction included the following image with his post: Not too long after, his ISP, Be Broadband, got in touch with him. The best part? Home.