1449 - 1513 Born at Tantallon Castle wis a powerful noble who turned against James III, first 'bellin-the-cat' or 'dealin' wi the king's favourite, Robert Cochrane, by hingin him fae a brig in Lauder, eventually battlin an killin the king at Sauchieburn. 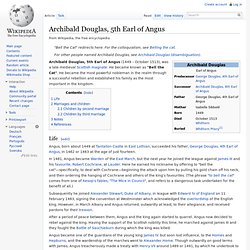 He became known as "Bell the Cat". He became the most powerful nobleman in the realm through a successful rebellion and established his family as the most important in the kingdom. Life[edit] Angus, born about 1449 at Tantallon Castle in East Lothian, succeeded his father, George Douglas, 4th Earl of Angus, in 1462 or 1463 at the age of just fourteen. Subsequently he joined Alexander Stewart, Duke of Albany, in league with Edward IV of England on 11 February 1483, signing the convention at Westminster which acknowledged the overlordship of the English king. After a period of peace between them, Angus and the king again started to quarrel. In October 1491 he fortified his castle of Tantallon against James, but had to submit and to exchange his Liddesdale estate and Hermitage Castle for the lordship of Bothwell. 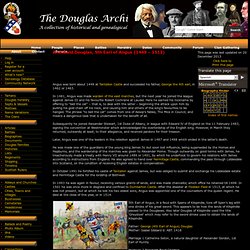 In 1481, Angus was made warden of the east marches, but the next year he joined the league against James III and his favourite Robert Cochrane at Lauder. Here he earned his nickname by offering to "bell the cat" – that is, to deal with the latter – beginning the attack upon him by pulling his gold chain off his neck, and causing him and others of the king's favourites to be hanged. James III, Bell-the-Cat and Lauder Bridge, Lauder Scotland. James became King, in 1460, at the age of eight, upon the death of James II, killed by a bursting cannon at Roxburgh Castle. 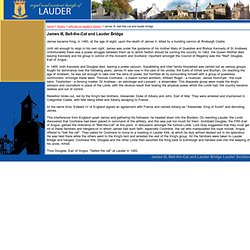 Until old enough to reign in his own right, James was under the guidance of his mother Mary of Gueldres and Bishop Kennedy of St Andrews. Unfortunately there was a power struggle between them as to which faction should be running the country. In 1463, the Queen Mother died leaving Kennedy and his group in control of the monarch and Scotland. Inportant amongst the Council of Regency was the "Red" Douglas, Earl of Angus. In 1465, both Kennedy and Douglas died, leaving a power vacuum. Rebellion broke out, led by the King's two brothers, Alexander, Duke of Albany and John, Earl of Mar. At the same time, Edward IV of England signed an agreement with France and named Albany as "Alexander, King of Scots" and demoting James. This interference from England upset James and gathering his followers, he headed down into the Borders. Archibald 'Bell the Cat' Douglas - The Douglas Archives. 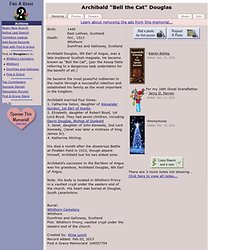 He became known as "Bell the Cat", (per the Aesop fable referring to a dangerous task undertaken for the benefit of all.) He became the most powerful nobleman in the realm through a successful rebellion and established his family as the most important in the kingdom. Archibald married four times:1. Catherine Seton, daughter of Alexander Gordon, 1st Earl of Huntly.2.

Elizabeth, daughter of Robert Boyd, 1st Lord Boyd. His died a month after the disastrous Battle at Flodden Field in 1513, though absent himself, Archibald lost his two eldest sons. Bell the cat. Meaning To hang a bell around a cat's neck to provide a warning. 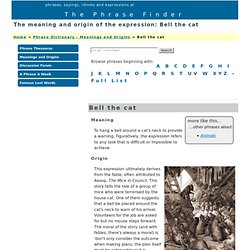 Figuratively, the expression refers to any task that is difficult or impossible to achieve. Origin This expression ultimately derives from the fable, often attributed to Aesop, The Mice in Council. This story tells the tale of a group of mice who were terrorised by the house cat. The attribution to Aesop is almost certainly incorrect. Bell the Cat. To Bell the Cat is a wonderful expression used to describe any dangerous task carried out at great personal risk. 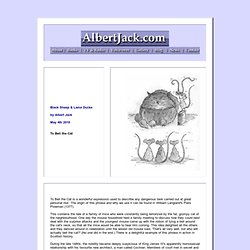 The origin of this phrase and why we use it can be found in William Langland's Piers Plowman (1377). This contains the tale of a family of mice who were constantly being terrorized by the fat, grumpy cat of the neighbourhood. One day the mouse household held a family meeting to discuss how they could best deal with the surprise attacks and the youngest mouse came up with the notion of tying a bell around the cat's neck, so that all the mice would be able to hear him coming.

This idea delighted all the others and they danced around in celebration until the wisest old mouse said, 'That's all very well, but who will actually bell the cat? ' (No one did in the end.) Robert Cochrane, Earl of Mar.