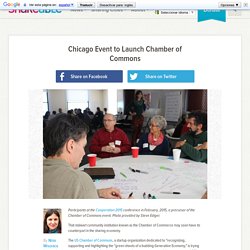 Photo provided by Steve Ediger. That stalwart community institution known as the Chamber of Commerce may soon have its counterpart in the sharing economy. Drinking Molotov Cocktails with Gandhi. Exposing the false prophets of social transformation. John Mackey, CEO of Whole Foods Market. 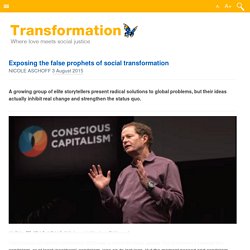 Credit: All rights reserved. The collapse of Lehman Brothers in 2008 was a shock for many people. For a moment it seemed like capitalism, or at least ‘neoliberal’ capitalism, was on its last legs. Stanford Social Innovation Review. (Illustration by Mike McQuade) Thirty-five years ago, one of us (Edgar S. 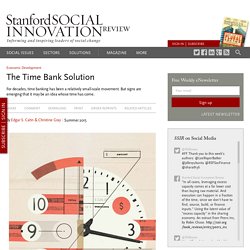 Cahn) started to experiment with a new way to link untapped social capacity to unmet social needs. He created a practice known as “time banking”—a mode of exchange that lets people swap time and skill instead of money. The Permaculture Student. Educate and Empower: Tools For Building Community Wealth. How Communities Can Build Wealth by Knocking on Doors.

Jennifer Meccozi spent two decades chopping onions as a restaurant cook before she became “chief door knocker” in Buffalo, New York, or in other words, director of organizing at People United for Sustainable Housing (PUSH) Buffalo. 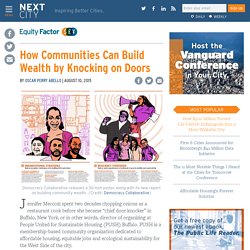 PUSH is a membership-based community organization dedicated to affordable housing, equitable jobs and ecological sustainability for the West Side of the city. Charting Your Own Credit Union - Sustainable Economies Law Center. Under-served communities, often communities of color, are in dire need of funding and development, but, all too often, people from these communities are unable to access funds necessary for this work. 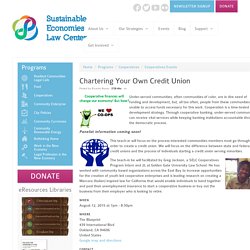 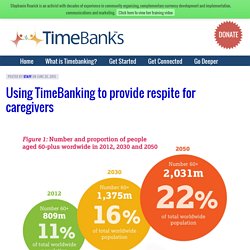 Ithaca, NY Launches its Own Digital Currency to Boost Local Economy. A startup local currency has just launched the Ithaca dollar in Ithaca, NY, designed to not only promote investment in local businesses and bring the community together, but to also pick up where one of the most successful alternative currency experiments in the US, the Ithaca HOURs, has left off. 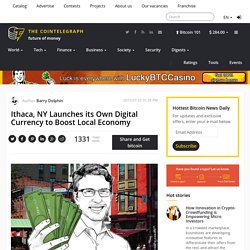 Ithaca Dollars The new Ithaca dollar is produced by a company called Ithacash, and for the moment is exclusively in digital form. The company founder, Scott Morris, is keen to keep local money within the local community. Local currencies “generate a lot of social and economic wealth,” said Morris to CNYcentral. The new currency has a one to one parity with the US dollar, although when an individual buys into the scheme they receive 125 Ithaca dollars for their first $100 deposit. Over 100 local businesses have so far signed up to the scheme, with some already accepting payments via text message. . - Ithacash founder, Scott Morris Local sentiment towards the initiative is positive. Ithaca HOURs. See Ya Later, Capitalism — the Collaborative Economy Is Taking Over — Backchannel. How land trusts can partner with young farmers : National Young Farmers Coalition. Land Banks and Land Banking: 2nd Edition. 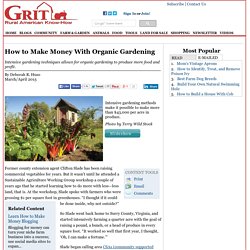 But it wasn’t until he attended a Sustainable Agriculture Working Group workshop a couple of years ago that he started learning how to do more with less—less land, that is. At the workshop, Slade spoke with farmers who were grossing $1 per square foot in greenhouses. Security for Girls Through Land Project (Girls Project) Goal The Girls Project aims to position girls to realize land rights as women, improving their long-term economic and social prospects and enabling them to reduce vulnerabilities – including child marriage, lack of education, and malnutrition – that they face in the immediate term as adolescents. 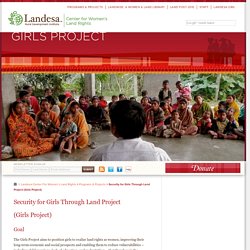 Progress The Girls Project has already reached more than 40,000 girls in more than 1,000 villages in the Cooch Behar district of West Bengal. Girls who participated in the program for one year are more likely to continue their studies, more likely to have an asset in their name, and less likely to become a child bride. The Community-Scale Permaculture Farm. As with many permaculture and sus-tainable living books, the wealth of beautiful glossy photographs in The Community-Scale Permaculture Farm elucidate an instant feeling of an idyllic rural, ecologically responsible life which anyone would feel compelled to be part of. 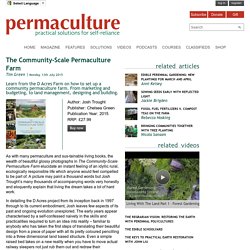 A picture may paint a thousand words but Josh Trought’s many thousands of accompanying words very honestly and eloquently explain that living the dream takes a lot of hard work. In detailing the D Acres project from its inception back in 1997 through to its current embodiment, Josh leaves few aspects of its past and ongoing evolution unexplored. The early years appear characterised by a self-confessed naivety in the skills and practicalities required to turn an idea into reality – familiar to anybody who has taken the first steps of translating their beautiful design from a piece of paper with all its pretty coloured pencilling into a three dimensional land based structure.

Tim Green is co-founder of Village Farm, Devon. These Neighbors Got Together to Buy Vacant Buildings. Now They’re Renting to Bakers and Brewers by Olivia LaVecchia. This article was produced by the Institute for Local Self-Reliance, as part of its Community-Scaled Economy Initiative, which produces research and partners with a range of allies to implement public policies that curb economic consolidation and strengthen locally owned enterprise.

The intersection of Central and Lowry Avenues in northeast Minneapolis is bustling. On the northwest corner is a trifecta of local businesses: A bike shop, a cooperative brewery, and a bakery, in buildings with eye-catching exteriors of rough-hewn wood and silvery porcelain bricks. The neighborhood grocery co-op is one block up the street. For Facebook, A Modest Proposal. General Motors recently reported that it will pull its advertising from Facebook, citing a low click-through rate among other indications that its advertising there isn’t effective.

I’m not surprised — I for one have never clicked on a Facebook ad and in fact don’t even notice them. Like most people, I have trained myself to tune them out. RSA Replay: How to Become a Soulful Organisation. Frederic Laloux video sharing key insights from his research. Video on the cultural model referenced in Reinventing Organizations and the emergence of teal. The Opportunity to Unite "Local Food"! - Farm-to-Consumer Legal Defense Fund. FarmMatch.com has become the world’s fastest growing local foods search engine. Raw milk activist, Max Kane, and software firm owner David King launched the website in the fall of 2012 to strengthen the local food movement and build community. In this article, Kane writes about the benefits FarmMatch has to offer farmers and consumers and the potential to help growing and protecting local food systems. A City Where Everyone Works, There Is No Police, And The Salary Is 1200 Euros.

Rural Child Poverty – New White House Report and Initiative. May 29, 2015 Addressing rural child poverty is the subject of a recently launched White House “Rural Impact” initiative, including a recently published report highlighting the trends in rural poverty in the United States and plans to address the issue through various federal safety net programs and investments. The Report — Opportunity for All: Fighting Rural Child Poverty On May 20th, the White House released a report prepared by the Council of Economic Advisers, Domestic Policy Council, and Office of Management and Budget entitled: Opportunity for All: Fighting Rural Child Poverty (May 2015 Report). The report was released during the Organization for Economic Cooperation and Development (OECD’s) tenth rural development policy conference, hosted by the White House Rural Council, with the support of the Atlantic Canada Opportunities Agency and Mexico’s Secretariat for Agrarian, Territorial and Urban Development.

Booting Corporate Power, Communities Are Taking Back Control of Their Water. We're bringin' farming back. The Tao of Innovation: Nine Questions Every Innovator Must Answer by Teng-Kee Tan. Appalachian Sustainable Agriculture Project's Local Food Guide. 10 Steps to a Healthier Community through Social Marketing. Building a More Effective Core Team. 7 Ways to Think Differently. Women Over 65 Own Nearly a Third of Iowa’s Farmland—Can They Prevent the Next Dust Bowl? Reclaiming Broken Places: Introduction to Civic Ecology. FEDN is an initiative of the Urban Economic Development Association of WI.

11 New Business Books for a New Economy. How to Run a Business in the Gift Economy. Community Land Trust. Land Banking. Designing & Building the Future…Literally. Open Source Ecology with Marcin Jakubowski (PVP061) Farm Commons. The Sharing Solution: How to Save Money, Simplify Your Life & Build Community by Janelle Orsi. The New Barnraising. FabLabs, Time Banks, and Other Hidden Treasures You Didn’t Know You Owned by David Bollier. Attributes of a Successful Sharer. The Promise of the Commons.