A City Where Everyone Works, There Is No Police, And The Salary Is 1200 Euros 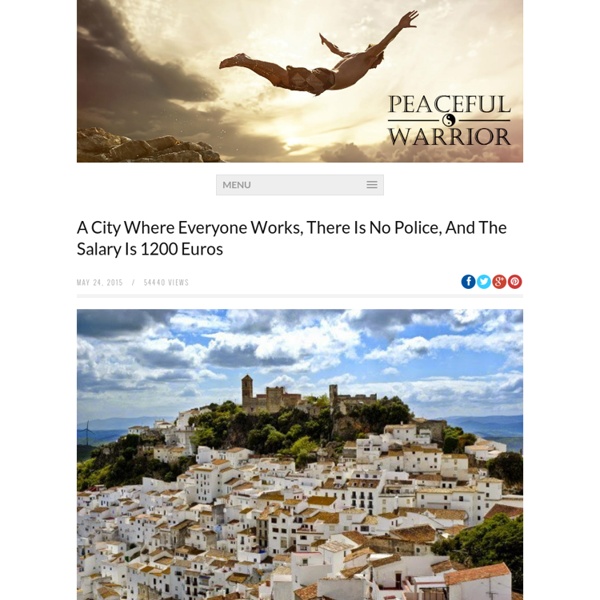 With virtually no police, crime or unemployment, meet the Spanish town described as a democratic, socialist utopia. Unemployment is non-existent in Marinaleda, an Andalusian village in southern Spain that is prosperous thanks to its farming cooperative. GARD Pro Not Registered On the face of it, the Spanish town of Marinaleda is indistinguishable from any other in its region. Nestled in the picturesque Campiña valley, the surrounding countryside is made up of rolling green hills, miles of olive plantations and golden fields of wheat stretching as far as the eye can see. The town is pretty, tranquil and typical of those found in Andalusia, Spain’s poorest and most southerly province. It’s also a democratic, anti-capitalist village whose mayor actively encourages shoplifting. In an interview after the event, Gordillo, the democratically elected mayor since 1979, said it was not theft, but a non-violent act of disobedience. “There are many families who can’t afford to eat,” he argued.

An Interview Introducing and Exploring Parecon 1. Where did parecon come from? What is its history? Participatory economics, or parecon, came mainly from the cumulative struggles of diverse populations trying to win liberation from capitalism. Parecon owes, in particular, to the anarchist and the libertarian socialist heritage, to the most recent experiences of the New Left of the Sixties, but also to every historical uprising and project aimed at eliminating class rule from the beginning to the present. It has learned from successes and from failures.

Introduction to Parecon: The Basics of Participatory Economics The following are installments for a column run in the Nashville Free Press. Participatory Economics, or Parecon for short, is an economic model developed by Michael Albert and Robin Hahnel as an alternative to capitalism. As I did not come up with this economic model, much was certainly borrowed from Albert and Hahnel for this column (some points and examples come directly from Albert). If you want to find out more about Parecon ahead of my pieces, you can visit the Z PARECON Page for books, articles, and presentations exploring all aspects of Participatory Economics. If you have specific Parecon questions (or challenges) for me, you are welcome to submit them at lonnie (at) projectQUESTION.org, and hopefully I can address a good number of these publicly in columns after the conclusion of this series.

2012: Time For Change (2010) "2012: Time for Change" presents an optimistic alternative to apocalyptic doom and gloom. Directed by Emmy Award nominee João Amorim, the film follows journalist Daniel Pinchbeck, author of the bestselling 2012: The Return of Quetzalcoatl, on a quest for a new paradigm that integrates the archaic wisdom of tribal cultures with the scientific method. As conscious agents of evolution, we can redesign post-industrial society on ecological principles to make a world that works for all.

Don't Panic - The Truth About Population (2013) Using state of the art 3D graphics and the timing of a stand-up comedian, world famous statistician Professor Hans Rosling presents a spectacular portrait of our rapidly changing world. With 7 billion people already on our planet we often look to the future with dread, but Rosling's message is surprisingly upbeat. Almost unnoticed we have actually begun to conquer the problems of rapid population growth and extreme poverty. Across the world, even in countries like Bangladesh, families of just two children are now the norm - meaning that within a few generations the population explosion will be over. A smaller proportion of people now live in extreme poverty than ever before in human history and the United Nations has set a target of eradicating it altogether within a few decades.

The Dutch "Basic Income" Experiment Is Expanding across Multiple cities By Maria Sanchez Diez / qz.com Free cash is in the works for a growing number of Dutch urbanites. After the city of Utrecht announced that it would give no-strings-attached money to some of its residents, other Dutch cities are getting on board for social experiments with “basic income,” a regular and unconditional stipend to cover living costs. Money & Life (2013) Money & Life is a passionate and inspirational essay-style documentary that asks a provocative question: can we see the economic crisis not as a disaster, but as a tremendous opportunity? This cinematic odyssey connects the dots on our current economic pains and offers a new story of money based on an emerging paradigm of planetary well-being that understands all of life as profoundly interconnected. A Note from the Film-makers: We offer Money & Life to the world in spirit of the Gift. With the Creative Commons license we are effectively decriminalizing and inviting sharing of the film. By streaming the film online at no cost and offering the digital download at no cost we are removing the financial barrier to access.

This Music Festival Will Challenge the Two-Party System Claire BernishJuly 21, 2015 (ANTIMEDIA) The second annual United We Stand Festival is slated to take place at the Belasco Theater in Los Angeles on September 19 from 5-10 pm PST. This historic event marks the Free and Equal Elections Foundation’s kickoff for a series of open presidential debates for 2016—and will be broadcast worldwide by freeandequal.org. Remember us, for… Share this: Like this: Like Loading... Leave a Reply Follow Get every new post delivered to your Inbox. Treehouse Hotels Robin’s Nest Our trip to Robin’s Nest Treehouse Hotels in Hesse, Germany was filled with winding roads through small villages and eerie night routes. When we finally arrived on the mountain, where the treehouses are located, it was late at night and the forests were pitch black. We were finding our way to the cabin through the vast darkness, when we found owner Peter Becker sitting at a campfire. The moment we walked into our treehouse, a warm and cozy feeling spread over us thanks to the beautiful wooden interiors and a flickering fireplace. The next morning, we woke up surrounded by nothing but lush greenery, large trees and quietness. After a rustic breakfast buffet that included homemade pancakes and fluffy scrambled eggs, we chatted with Becker – who’s been a fan of Robin Hood since childhood – about how he came up with the idea for the treehouse hotels, the connection to the nearby Berlepsch Castle and his new life in the woods after spending many years in the big city…

The Economics of Happiness (2011) Economic globalization has led to a massive expansion in the scale and power of big business and banking. It has also worsened nearly every problem we face: fundamentalism and ethnic conflict; climate chaos and species extinction; financial instability and unemployment. There are personal costs too. For the majority of people on the planet life is becoming increasingly stressful. We have less time for friends and family and we face mounting pressures at work.

Bucket crops: Mississippi man takes container gardening to another level Some people are happy with a patio tomato on the porch. Willie Anderson, 82, took container gardening to another level; he planted tomatoes, cucumbers, corn, okra, squash, peppers and eggplants in five-gallon plastic buckets in his yard in Red Banks, Mississippi. He now has plants in more than 1,000 buckets.