Implementing HAL hypermedia API using Spring HATEOAS. Waiting for client libraries getting smart enough… To use or not to use hypermedia (HATEOAS) in a REST API, to attain the Level 3 of the famous Richardson Maturity Model. 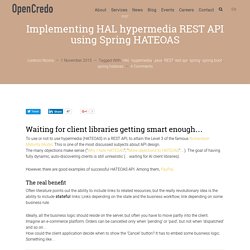 This is one of the most discussed subjects about API design. The many objections make sense (“Why I hate HATEOAS“, “More objections to HATEOAS“…). 10 Best Practices for Better RESTful API. Web APIs has become an very important topic in the last year. 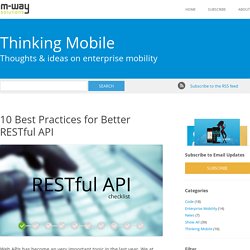 We at M-Way Solutions are working every day with different backend systems and therefore we know about the importance of a clean API design. Typically we use a RESTful design for our web APIs. The concept of REST is to separate the API structure into logical resources. There are used the HTTP methods GET, DELETE, POST and PUT to operate with the resources. Configure gson in spring using GsonHttpMessageConverter. Jackson has been the default json library in springframework until version 4.1 where it added support to use Gson by configuring GsonHttpMessageConverter. 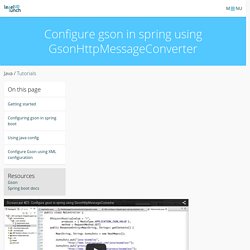 Let's take a look at how to configure your spring application to use Google Gson library's Gson class. Detailed Video Notes Gson is a java based library that converts java objects into their JSON representation and vice versa. A common example is when you are create a REST end point via a spring @Controller where you fetch a list of objects that you want to convert into an jsonarray. Post JSON to spring REST webservice. After making a GET request to a REST service the natural progression is to POST information back to the server. 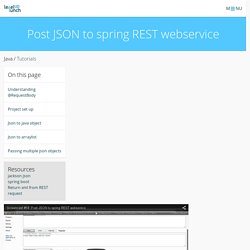 In this episode we will look at how to post json to spring controller and have it automatically convert JSON to arraylist, object or multiple objects. Detailed Video Notes Understanding @RequestBody The first thing to understand is how json binds to a java object. The HAL Browser. Best Practices for Designing a Pragmatic RESTful API. Your data model has started to stabilize and you're in a position to create a public API for your web app. 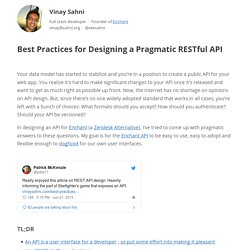 You realize it's hard to make significant changes to your API once it's released and want to get as much right as possible up front. Now, the internet has no shortage on opinions on API design. But, since there's no one widely adopted standard that works in all cases, you're left with a bunch of choices: What formats should you accept? HTTP/1.1: Status Code Definitions. Each Status-Code is described below, including a description of which method(s) it can follow and any metainformation required in the response. 10.1 Informational 1xx This class of status code indicates a provisional response, consisting only of the Status-Line and optional headers, and is terminated by an empty line. 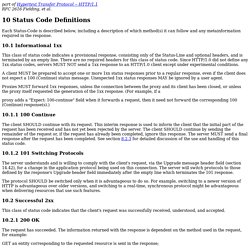 There are no required headers for this class of status code. Since HTTP/1.0 did not define any 1xx status codes, servers MUST NOT send a 1xx response to an HTTP/1.0 client except under experimental conditions. A client MUST be prepared to accept one or more 1xx status responses prior to a regular response, even if the client does not expect a 100 (Continue) status message.

Proxies MUST forward 1xx responses, unless the connection between the proxy and its client has been closed, or unless the proxy itself requested the generation of the 1xx response. Why HATEOAS. Thinking about IT: HATEOAS using Spring Framework. Hypermedia based REST webservices - Tutorial for Telosys Tools 2.1. As we said on the introduction, HATEAOS is an architectural constraint where clients are driven by links and their relation types. 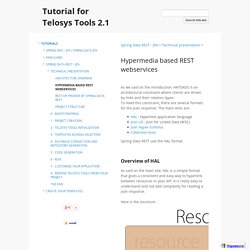 To meet this constraint, there are several formats for the json response. The main ones are : Spring Data REST use the HAL format. Building Elegant REST Services with Spring - Safari Blog. A guest post by Josh Long, the lead author on Apress’ Spring Recipes, 2nd Edition, O’Reilly’s Spring Roo, and a SpringSource open-source project committer and contributor. 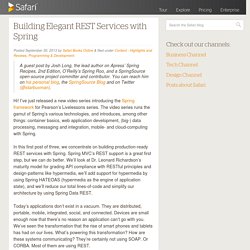 You can reach him on his personal blog, the SpringSource Blog and on Twitter (@starbuxman). Hi! I’ve just released a new video series introducing the Spring framework for Pearson’s Livelessons series. The video series runs the gamut of Spring’s various technologies, and introduces, among other things: container basics, web application development, (big-) data processing, messaging and integration, mobile- and cloud-computing with Spring.

Where to find REST presentations. Richardson Maturity Model. A model (developed by Leonard Richardson) that breaks down the principal elements of a REST approach into three steps. 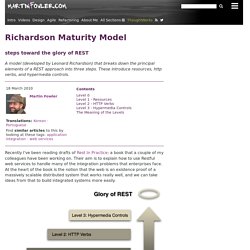 These introduce resources, http verbs, and hypermedia controls. Recently I've been reading drafts of Rest In Practice : a book that a couple of my colleagues have been working on. Their aim is to explain how to use Restful web services to handle many of the integration problems that enterprises face. At the heart of the book is the notion that the web is an existence proof of a massively scalable distributed system that works really well, and we can take ideas from that to build integrated systems more easily.

Figure 1: Steps toward REST To help explain the specific properties of a web-style system, the authors use a model of restful maturity that was developed by Leonard Richardson and explained at a QCon talk. Level 0 The starting point for the model is using HTTP as a transport system for remote interactions, but without using any of the mechanisms of the web. REST API Reference. Use the Payouts API to make PayPal payments to multiple PayPal accounts in a single API call. 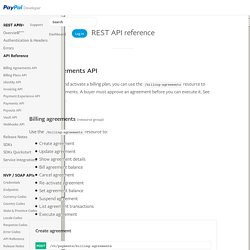 You can specify the recipients by using their PayPal email addresses, phone numbers, or encrypted PayPal account numbers. The Payouts API is a fast, convenient way to send commissions, rebates, rewards, and general disbursements. Payouts appear as Mass Payments in the sender's PayPal account and are provided with the Mass Payment reports. For more information about the Payouts API, see Payouts. Swagger: Make Developers Love Working With Your REST API.

As JAX-RS API is evolving, with version 2.0 released earlier this year under JSR-339 umbrella, it's becoming even more easy to create REST services using excellent Java platform. But with great simplicity comes great responsibility: documenting all these APIs so other developers could quickly understand how to use them. Unfortunately, in this area developers are on their own: the JSR-339doesn't help much. For sure, it would be just awesome to generate verbose and easy to follow documentation from source code, and not asking someone to write it along the development process. Sounds unreal, right? In certain extent, it really is, but help is coming in a form of Swagger. Getting Started · Building a Hypermedia-Driven RESTful Web Service. Now that you’ve set up the project and build system, you can create your web service. Begin the process by thinking about service interactions. The service will expose a resource at /greeting to handle GET requests, optionally with a name parameter in the query string.

The GET request should return a 200 OK response with JSON in the body that represents a greeting. Thoughts on RESTful API Design. HATEOAS with Spring MVC REST. REST has been getting momentum for the last few years. Roy Fielding was the first to come up with the term "REST" in the 5th chapter of his thesis. When describing REST, we usually say this style of architecture builds on top of 5 principles: resources, uniform interface, representation, stateless architecture, hypermedia.

Today we'll study the hypermedia principle and see how to implement HATEOAS - hypermedia as the engine of application state - with Spring MVC. HATE... what?