Toxic BPA found in 16,000 food and beverage items. 10 Signs You Might Be Suffering From A Hormonal Imbalance. Most women experience pretty drastic physical changes when they hit their 40s and 50s. 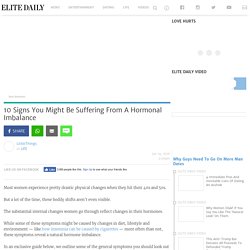 But a lot of the time, these bodily shifts aren't even visible. The substantial internal changes women go through reflect changes in their hormones. While some of these symptoms might be caused by changes in diet, lifestyle and environment — like how insomnia can be caused by cigarettes — more often than not, these symptoms reveal a natural hormone imbalance. In an exclusive guide below, we outline some of the general symptoms you should look out for if you suspect you're undergoing hormone changes. These symptoms may very well be a side effect of perimenopause, which is a period when estrogen levels and egg production decline. 1. Headaches and migraines have long been linked to the female hormone estrogen. This powerful hormone controls the chemicals in the brain that cause or alleviate the feelings of pain.

As such, a decline in estrogen levels can lead to headaches. But for others, the symptoms worsen. 2. Natural Solutions for Hormonal Imbalance and Endocrine Disruptors. How much Atrazine and Roundup is in your food? Prepare to be blown away! Silencing the Scientist: Tyrone Hayes on Being Targeted By Herbicide Firm Syngenta. ATRAZINE CHEMICAL INDUCED HOMOSEXUALITYtm Legally Allowed Poisons in our Tap Water.

The Effects of BPA in Paper Receipts. The Great Invasion - Documentary on endocrine disruptors. Are Canned Foods Dangerous To Consume? Posion Bisphenol A in Plastics, canned foods, baby bottles, making babys stupid. ACID RAIN: Acidic Drinking Water & Its Health Risks. The ill effects of acidity in drinking water has recently come to light as studies have progressed documenting the changing lifestyles of Americans. pH is the measurement of acid versus alkaline within a substance. 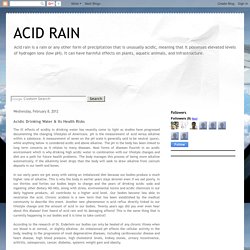 A measurement of seven on the pH scale is generally said to be neutral (pure), while anything below is considered acidic and above alkaline. The pH in the body has been linked to long term concerns as it relates to many diseases. PROOF, BOTTLED WATER IS MAKING YOU SICK! Estrogen Polution in Water and Environment. Plastic Water Bottles & Food Containers ...or Glass, Estrogenics. Uranium. Uranium is a silvery-white metallic chemical element in the actinide series of the periodic table, with symbol U and atomic number 92. 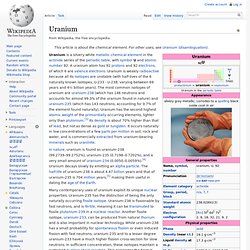 A uranium atom has 92 protons and 92 electrons, of which 6 are valence electrons. Uranium is weakly radioactive because all its isotopes are unstable (with half-lives of the 6 naturally known isotopes, U-233 - U-238, varying between 69 years and 4½ billion years). The most common isotopes of uranium are uranium-238 (which has 146 neutrons and accounts for almost 99.3% of the uranium found in nature) and uranium-235 (which has 143 neutrons, accounting for 0.7% of the element found naturally).

Uranium has the second highest atomic weight of the primordially occurring elements, lighter only than plutonium.[3] Its density is about 70% higher than that of lead, but not as dense as gold or tungsten. 10 U.S. cities with the worst drinking water - Business - Going Green. Unknown to most Americans, a surprising number of U.S. cities have drinking water with unhealthy levels of chemicals and contaminants. 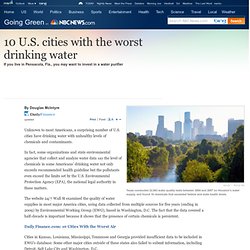 In fact, some organizations and state environmental agencies that collect and analyze water data say the level of chemicals in some Americans' drinking water not only exceeds recommended health guideline but the pollutants even exceed the limits set by the U.S. Environmental Protection Agency (EPA), the national legal authority in these matters. The website 24/7 Wall St examined the quality of water supplies in most major America cities, using data collected from multiple sources for five years (ending in 2009) by Environmental Working Group (EWG), based in Washington, D.C. The fact that the data covered a half-decade is important because it shows that the presence of certain chemicals is persistent. Daily Finance.com: 10 Cities With the Worst Air Daily Finance.com : Companies That Will Disappear in 2011 10. 9. AP: Drugs found in drinking water. By Jeff Donn, Martha Mendoza and Justin Pritchard, Associated Press A vast array of pharmaceuticals — including antibiotics, anti-convulsants, mood stabilizers and sex hormones — have been found in the drinking water supplies of at least 41 million Americans, an Associated Press investigation shows. 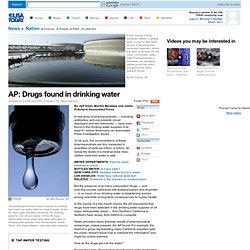 To be sure, the concentrations of these pharmaceuticals are tiny, measured in quantities of parts per billion or trillion, far below the levels of a medical dose. Also, utilities insist their water is safe. But the presence of so many prescription drugs — and over-the-counter medicines like acetaminophen and ibuprofen — in so much of our drinking water is heightening worries among scientists of long-term consequences to human health. In the course of a five-month inquiry, the AP discovered that drugs have been detected in the drinking water supplies of 24 major metropolitan areas — from Southern California to Northern New Jersey, from Detroit to Louisville How do the drugs get into the water? There Are Drugs in Drinking Water. Now What? There are traces of sedatives in New York City’s water. 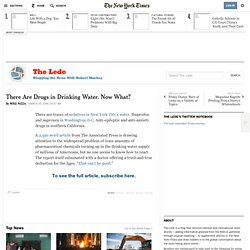 Ibuprofen and naproxen in Washington, D.C. Anti-epileptic and anti-anxiety drugs in southern California. A 2,550 word article from The Associated Press is drawing attention to the widespread problem of trace amounts of pharmaceutical chemicals turning up in the drinking water supply of millions of Americans, but no one seems to know how to react. The report itself culminated with a doctor offering a tried-and-true deduction for the Ages: “That can’t be good.” But how bad is it, exactly? ”We recognize it is a growing concern and we’re taking it very seriously,” said Benjamin H.

Pharmaceuticals in Our Water Supply Are Causing Bizarre Mutations to Wildlife. August 9, 2007 | Like this article? 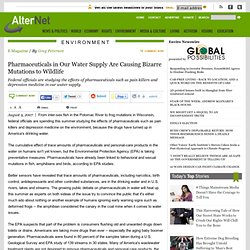 Join our email list: Stay up to date with the latest headlines via email. From inter-sex fish in the Potomac River to frog mutations in Wisconsin, federal officials are spending this summer studying the effects of pharmaceuticals such as pain killers and depression medicine on the environment, because the drugs have turned up in America's drinking water. The cumulative effect of trace amounts of pharmaceuticals and personal-care products in the water on humans isn't yet known, but the Environmental Protection Agency (EPA) is taking preventative measures.

Better sensors have revealed that trace amounts of pharmaceuticals, including narcotics, birth control, antidepressants and other controlled substances, are in the drinking water and in U.S. rivers, lakes and streams. Pharmaceuticals Found in Public Water Supply. Pharmaceuticals Found in Public Water Supply NEW YORK - An array of pharmaceuticals - including antibiotics, anticonvulsants, mood stabilizers, and sex hormones - have been found in the drinking water supplies of at least 41 million Americans, an Associated Press investigation found. 'We recognize it is a growing concern, and we're taking it very seriously,' said Benjamin Grumbles, assistant administrator for water at the federal EPA. 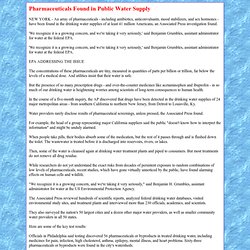 The concentrations of these pharmaceuticals are tiny, measured in quantities of parts per billion or trillion, far below the levels of a medical dose. Jacob M. Appel: Beyond Fluoride: Pharmaceuticals, Drinking Water and the Public Health. This week's New York Times Magazine draws attention to an article in The British Journal of Psychiatry that has been the talk of bioethical circles since May, when researchers at Japan's Oita University reported that communities with increased levels of lithium in their drinking water suffered a significantly lower incidence of suicide. 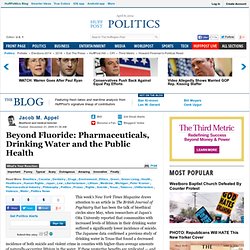 The Japanese data confirmed a previous study of drinking water in Texas that found a decreased incidence of both suicide and violent crime in counties with higher-than-average amounts of naturally-occurring lithium in the water. If these protective benefits are replicated -- and no equally deleterious health effects of such low-dose exposures are discovered -- public health authorities may soon confront the question of whether it is ethical to supplement all public water supplies with lithium.

The benefits of lithium fortification may someday prove just as dramatic. Lithium may actually be the tip of the fortification iceberg. Pharmaceuticals_water.pdf (application/pdf Object) Prescription Drugs in Water Supply. Can Birth Control Hormones Be Filtered from the Water Supply? Dear EarthTalk: Is there any truth to the rumor about high levels of birth control chemicals being found in some cities’ drinking water? 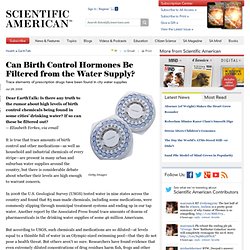 If so can these be filtered out? -- Elizabeth Yerkes, via email It is true that trace amounts of birth control and other medications—as well as household and industrial chemicals of every stripe—are present in many urban and suburban water supplies around the country, but there is considerable debate about whether their levels are high enough to warrant concern. In 2008 the U.S. Geological Survey (USGS) tested water in nine states across the country and found that 85 man-made chemicals, including some medications, were commonly slipping through municipal treatment systems and ending up in our tap water.

But according to USGS, such chemicals and medications are so diluted—at levels equal to a thimble full of water in an Olympic-sized swimming pool—that they do not pose a health threat. EarthTalk is produced by E/The Environmental Magazine. Removing Estrogen from our Water Supply PDF. Feminizing Uranium Added to Water Supply. Feminizing Uranium Added to Water Supply – Worldwide Water Conspiracy Tonight’s Conspiracy Theory with Jesse Ventura, to expose toxins in water, population control motives and water privatization schemes worldwide; Premieres FRIDAY, DEC. 3 AT 10 PM EST/ 9 PM CST Testing shows that numerous deadly toxins have been found in the majority of America’s tap water, and it’s no accident.

Feminizing-uranium, fluoride & lithium in water Ventura. Tonight’s Conspiracy Theory to expose toxins in water, population control motives and water privatization schemes worldwide; Premieres FRIDAY, DEC. 3 AT 10 PM EST/ 9 PM CST Aaron DykesInfowars.com December 3, 2010 As producer Michael Braverman announced yesterday, what was once an episode just dealing with schemes to profit off the Great Lakes has now expanded into a startling exposé of the dangerous toxins being added to our water by design. Arsenic and Uranium in Private Drinking Water Wells. Uranium & Radium In Drinking Water PDF. Drinking Water Contaminant - Uranium. Sources of uranium in drinking water Uranium ore is often formed by the dissolution, transport, and precipitation of uranium-rich groundwater and for that reason the geochemical behavior of uranium has been extensively studied.

Solubility is dependent on pH, the presence (or absence) of oxygen, as well as the presence of other elements, such as sulfur and iron. Dissolved uranium is present in natural waters in concentrations ranging from 0.1 ug/L (parts per billion) with concentrations greater than 1 mg/L (parts per million) typically associated with uranium ore chemically precipitated in "roll-fronts" in the aquifer. Uranium is also found in igneous rocks and hydrothermal rock veins, and some hot springs are known for their naturally occurring radioactivity due to uranium.

Uranium cannot be detected by taste, sight, or smell. Environmental Contamination From Uranium Facilities PDF. Radioactivity Map of Vermont. Vermont Agency of Natural Resources Department of Environmental Conservation One South 103 South Main Street Waterbury, Vermont 05671 Fact Sheet - Radioactivity Map 1. Why make a radioactivity map of Vermont? In 2000, groundwater from a number of private wells in the towns of Milton and Colchester was found to have elevated radioactivity.

Subsequent to this discovery, the Vermont Geological Survey investigated the geologic literature and found that some previous geophysical and geological surveys had identified elevated radioactivity (anomalies) in this area. 2. Radium in Ground Water illinoiis. Uranium in Drinking Water Factsheet PDF. Uranium Found in Kansas Drinking Water Supplies. Uranium Found in Kansas Drinking Water Supplies LAWRENCE, Kansas, November 28, 2008 (ENS) - The radioactive element uranium has been found above federal limits in the drinking water supplies of nine Kansas communities, says Don Whittemore, a geochemist with the Kansas Geological Survey. Now these communities must devise solutions to bring down the uranium levels. Possible solutions include relocating wells, buying water from other suppliers, or installing a treatment system, such as reverse osmosis. In 2003 the U.S. In Time of Water Shortages, Drinking Fountain Revival. Top Secret Water - 2005 Documentary.