String theorist Michio Kaku: 'Reaching out to aliens is a terrible idea' Michio Kaku is a professor of theoretical physics at City College, New York, a proponent of string theory but also a well-known populariser of science, with multiple TV appearances and several bestselling books behind him. 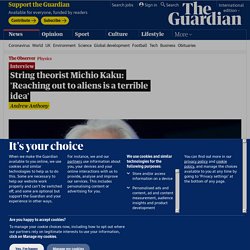 His latest book, The God Equation, is a clear and accessible examination of the quest to combine Einstein’s general relativity with quantum theory to create an all-encompassing “theory of everything” about the nature of the universe. How close do you believe science is to accomplishing a theory of everything? Well, I think we actually have the theory but not in its final form.

It hasn’t been tested yet and Nobel prize winners have taken opposite points of view concerning something called string theory. All the space exploration missions to look forward to in 2021. Most of us will remember 2020 primarily as the year of the great pandemic, but let's not forget how space exploration and astronomy had good years considering the circumstances. 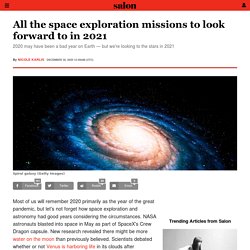 NASA astronauts blasted into space in May as part of SpaceX's Crew Dragon capsule. New research revealed there might be more water on the moon than previously believed. Scientists debated whether or not Venus is harboring life in its clouds after discovering phosphine. Betelgeuse continued to dim, raising suspicions that it might soon go nova. Researchers noticed an excitingly odd series of radio signals. While 2021 won't magically reset our reality, there is a lot to look forward to next year, especially in the realm of space news.

NASA to launch Q-PACE Originally planned to be launched earlier this month, the CubeSat Particle Aggregation and Collision Experiment (Q-PACE) is now scheduled to take off from the Mojave Air and Space Port on January 15, 2021. Mars2020 will finally get to work. The Life of Pi, and Other Infinities. In the late 19th century, the great German mathematician Georg Cantor took on infinity not as a means to an end, but as a subject worthy of rigorous study in itself. 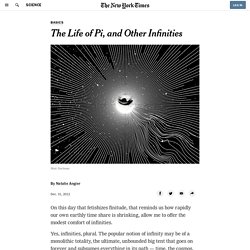 He demonstrated that there are many kinds of infinite sets, and some infinities are bigger than others. Hard as it may be to swallow, the set of all the possible decimal numbers between 1 and 2, being unlistable, turns out to be a bigger infinity than the set of all whole numbers from 1 to forever, which in principle can be listed. In fact, many of Cantor’s contemporaries didn’t swallow, dismissing him as “a scientific charlatan,” “laughable” and “wrong.” Astronomers spotted the farthest galaxy group to date. An international team of astronomers has recently identified the farthest galaxy group called EGS77. 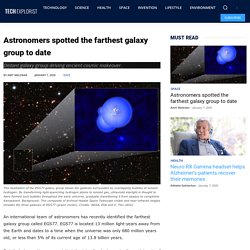 EGS77 is located 13 million light-years away from the Earth and dates to a time when the universe was only 680 million years old, or less than 5% of its current age of 13.8 billion years. NASA discovers first potentially habitable Earth-size planet. NASA has just discovered the first potentially habitable Earth-size planet, 100 light-years from home, the agency has revealed. 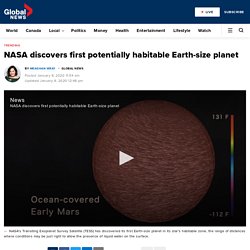 The planet was discovered during the agency’s Transiting Exoplanet Survey Satellite (TESS), which is part of the organization’s Explorers program and was first launched in April 2018. The discovery, confirmed by NASA’s Spitzer Space Telescope, was announced during an American Astronomical Society meeting on Monday in Honolulu, Hawaii. The planet is part of a multi-planet system, the agency said, around a small, cool M dwarf star called TOI 700 in the Dorado constellation. Betelgeuse. Star in the constellation of Orion Coordinates: 05h 55m 10.3053s, +07° 24′ 25.426″ 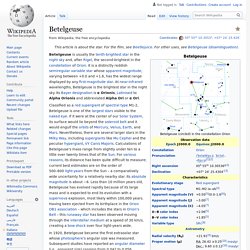 Spiral galaxy. An example of a spiral galaxy, the Pinwheel Galaxy (also known as Messier 101 or NGC 5457) Spiral galaxies are named for the spiral structures that extend from the center into the disk. NGC 6822. Observational history[edit] An analysis of Hubble's plates by Susan Kayser in 1966 remained the most complete study of this galaxy until 2002.[7] In 1977, Paul W. 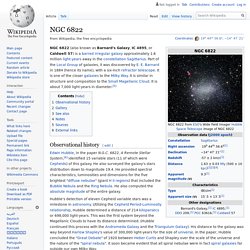 A Northrop Grumman Cygnus cargo ship, wrapping up a two-day rendezvous, caught up with the International Space Station early Monday and then stood by while astronaut Jessica Meir, operating the lab's robot arm, locked onto a grapple fixture to secure the capsule for berthing. 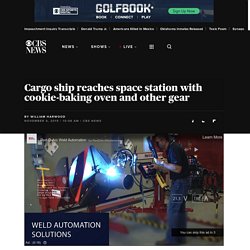